I have a confession to make: I've never played any of the Un- sets. Years ago, I was a pretty hardcore Spike ("Was?" —basically everyone), and those cards couldn't win me tournaments, so I passed on the sets.

But there was always one card that tickled my fancy a bit, because it was so sneaky, so underhanded—so blue­­—that it fit my idea of what a Spikey Un- card would look like.

I had visions of sliding this into play under my turn-one Island (used to cast Ponder or Force Spike, probably), and then gleefully attacking while holding up countermagic.

Yes, this is why people don't play casual formats with me.

But my preview card today reminded me of Cheatyface so much that I felt compelled to write this article on another take on a sneaky "free" creature—Masterful Ninja. 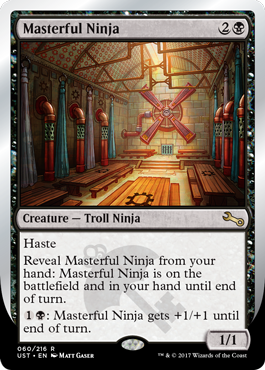 Before we get to my dull, Spikey inclinations with this card, I want to gush a bit about the joke in the art—which blew my mind when I saw it.

Matt Gaser was clearly the correct pick for this, because I could not find that Ninja the first, oh, dozen times I looked at this art. I became convinced it wasn't there, like one of those 3D Magic Eye things when you can't quite unfocus correctly. That is, until someone from R&D casually pointed out what I was missing.

Do you see it? It's okay if you don't. You might have to try staring at it for a while.

Gaser is a new artist to the world of Magic, but with tricks like this, I can imagine he'll be a go-to for wild art for some time.

Like the art, it takes a moment for this ability to really hit you. Then it does: Masterful Ninja is free.

No sneaking, no ability for your opponent to remove it just by being keen-eyed—it simply comes into play at any time, with haste, and all you have to do is reveal it. I'm not sure why it even has a mana cost at the top—why in the world would you ever play it?

Also like the art (see it yet?), there's more to this card than meets the eye.

The effect only lasts until the end of turn, so you can play this (for free), attack (pump if you like), and get it back so it's only in your hand. Cards in your hand aren't tapped, so if you need a blocker next turn—boom, Masterful Ninja blocker.

And if your opponent tries to intercede with a bounce spell? Doesn't matter—Masterful Ninja is already in your hand.

(Just like the Ninja in the art. Have you found it yet?)

It's not all sunshine and sneaky rainbows (there are no rainbows in the art, that's not a clue). Existing simultaneously in two zones makes Masterful Ninja twice as vulnerable (kind of). It means it can be discarded or destroyed, both of which will send it to your graveyard (where it does not exist in two zones—it's not an immortal Ninja).

Also, the "shade" ability to grow larger isn't terribly useful early in the game, when its sneakiness is at its best. By the time you can pump it to the sky, your opponent might have already seen it coming.

Also, oddly enough, it doesn't actually work very well with ninjutsu. I think. It's an Un- set, so do what you want, but my read on the ability is that you can't return a creature to your hand as part of the cost if the card is already in your hand—just like you can't sacrifice an already-dead creature or discard an already-discarded card. I think the ability is flavorful enough that you might be able to get a flavor judge ruling on it, but you'll have to check with official Unstable arbiter Mark Rosewater.

Similarly, you can't save your Masterful Ninja from destruction with something like Dramatic Rescue. Masterful Ninja can't escape to your hand to avoid removal—because it's already there.

Now, before I go, I want to give you one more chance to find the Ninja.

Do you see it yet?

The Tokens of Unsanctioned by, Blake Rasmussen

Even though this list is short, I suggest you squirrel away some time for this article to check out the tokens of Unsanctioned. I mean, where else would you stash your acorns?

The Tokens of Theros Beyond Death by, Kendall Pepple

The full-art tokens from Theros Beyond Death look astounding—like age-old myths waiting to be told. Soldiers, Satyrs, and . . . Tentacles? Fabled odysseys abound when you play your games ...