The silliest game of Magic I've ever played went down in the schoolyard many years ago. My friends and I were obsessed back then—we started shuffling our cards the instant our last class finished, and we only scooped 'em up when our bus was about to leave without us.

I had some powerful decks that won with Hypnotic Specter and Shivan Dragon, but my favorite brew was just a stack of the silliest creatures I could find. Brushwagg. Ovinomancer. Orcish Librarian. And, of course, Goblin Snowman.

My silly deck never—and I mean never—won a game. This usually didn't bother me, but one day I walked out of seventh-period math determined to get that elusive victory. Unfortunately, things started bad and got worse. Once my Chaos Harlequin went down, it was me and a Goblin Snowman versus the might of a lethal Mahamoti Djinn.

With my death all but certain, I fought back the only way I could: by cheating. I reached into my pocket, grabbed a pen, and wrote "FLYING" in the Goblin Snowman's text box. "Block your Djinn," I said to my opponent, using the calmest tone I could muster.

I reached down and used my pen scribble on some crude, stubby insect wings. "They can now."

"Okay," my opponent said, playing along. "Then I'll use my Dwarven Sea Clan to ping it."

"Nope," I laughed, scribbling "Protection from Dwarves" on my Snowman.

The game devolved into a ridiculous giggle-fest, only ending when I drew an angry face on a Mountain, gave it 39 points of power, and swung for the win. It was the only game I ever won with that deck, and I'm still kind of proud that it happened that way. It was fun coming up with abilities and creative justifications for my cards in real time, even though it was . . . somewhat against the rules.

Luckily, Unstable will let us have the same sort of fun without the ethical ramifications. Check out my preview card, Modular Monstrosity: 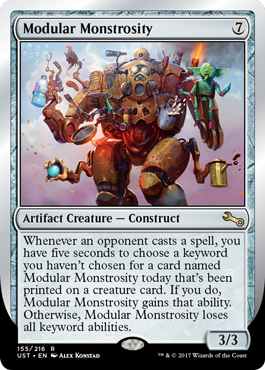 Modular Monstrosity may not be a Goblin Snowman with dragonfly wings, but it's not too far off. Look at all the crazy doodads hanging from that robot! They don't all align with existing keyword abilities, but it's fun to think about what they might represent. Is the Goblin puppet there to intimidate your opponents? Will the paint (magical paint?) allow Modular Monstrosity to phase out? Does the telescope help give this plucky little Construct some reach? Imagining Modular Monstrosity doing ten things at once is one of the most fun parts of this card, and I hope people will send me fan art of their favorite Monstrosities in action.

Making your Modular Monstrosity live up to its potential should be an interesting challenge. Not only do you need to come up with a new keyword ability any time one of your opponents casts a spell, you can't reuse the same keyword twice. This includes keyword modifiers, which means that you can't give it two different kinds of protection, nor can you give it soulshift 4 and soulshift 7 on the same day.

It's also deceptively difficult to come up with useful keyword abilities on the fly. Even Modular Monstrosity's name seems intentionally designed to throw you off track—the modular ability is only useful if you've already got +1/+1 counters on your creature thanks to some other ability, and monstrosity is an activated ability, making it an illegal choice to begin with. To be fair, though, Modular Monstrosity is a catchier name than Indestructible Annihilator.

If you're the kind of person who likes to show off their knowledge of obscure Magic facts, Modular Monstrosity is a dream come true. One option is to start simple. Unstable has several creatures with clear and powerful keyword abilities. I wouldn't mind owning a Modular Monstrosity with either of these abilities: 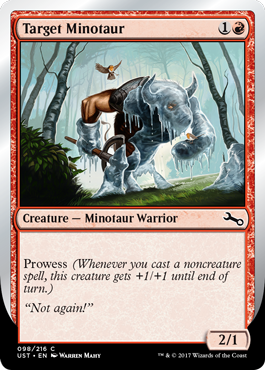 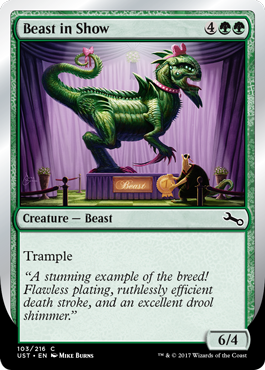 You can also go straight for the weirdness. Banding? Flanking? Rampage? They're all on the table, though I recommend making sure you know what these abilities do before giving them to your robot.

Modular Monstrosity can be quite powerful if you use it correctly, but my favorite part of the card is that it gives you the flexibility to use it any way you want. I guarantee you that I'm going to play at least one game where I only allow my Modular Monstrosity to accrue negative or unhelpful abilities. How bad can I make my Monstrosity without having it die? Giving it defender is a start, cumulative upkeep seems terrifically awful, and morph certainly isn't going to do much once it's already in play and face-up.

Modular Monstrosity is also the perfect card to include in any game where you have to justify the flavor of your actions. What will this Construct even look like once it has fear, exalted, and bushido? I don't know, but I'm excited to make up a story about a really scary robot who has been blessed by Angels and also follows the way of the Samurai.

However you choose to play your Modular Monstrosity, I hope you have as much fun with it as I did with my old Goblin Snowman. Sometimes it can be fun to embrace the sillier side of Magic's incredible flavor.