Meris Mullaley is a lapsed archaeologist working in the games industry. She currently uses her knowledge of history and cultures as creative producer on Magic: The Gathering's Worldbuilding team.
Share Article
Share Tweet Share

Who's excited to share her favorite Planeswalker with you today? This gal!

Hi! I'm Meris Mullaley, creative producer for the Worldbuilding team behind Magic: The Gathering, and it is my honor to preview two cards from War of the Spark featuring Narset.

Narset is a master of martial arts and mental discipline with an insatiable thirst for knowledge. Honing her abilities for years as the Great Teacher's student, Narset earns her place as the top pupil of Dragonlord Ojutai. Yet she isn't satisfied when she reaches the dragon's perch as a Master. Narset needs something new to drive toward, and she finds that in Ojutai's forbidden archives. Each scroll provides new knowledge and new questions, and upon reading the last scroll on Tarkir, she learns a truth that ignites her spark.

"I've been told my whole life that the great Ojutai holds all knowledge, but I wonder what our forebears knew."

—Narset (Learn from the Past)

We last saw Narset trudging through knee-deep snow in search of Ugin and answers about Tarkir's history, its khans, and its dragons. This took place in "Unbroken and Unbowed," part of the Dragons of Tarkir story released four years ago. In that moment, Narset is resolute in her mission to uncover the secrets and ancient stories of Tarkir. She tells Sarkhan that one day she will planeswalk again, but for now, she is where she needs to be.

—Narset (Tapestry of the Ages)

If you played Magic or followed MTG Story online during the Tarkir block, you might remember that Narset and the plane of Tarkir existed in two separate timelines. The Narset we meet during Khans of Tarkir, as told in the stories "Enlightened" and "Journey to the Nexus," is the leader of the Jeskai clan and one of the set's eponymous khans. While that timeline is no more, the core of who Narset is remains the same: strong, disciplined, and driven.

In War of the Spark, Narset travels to a new plane to fight Bolas and his Elderspell. Given her past commitment to Tarkir and its people, in joining the fight against Bolas, Narset demonstrates her commitment to the wider Multiverse. And if Bolas is hiding any secrets, I'd wager Narset has the curiosity and grit to uncover them. 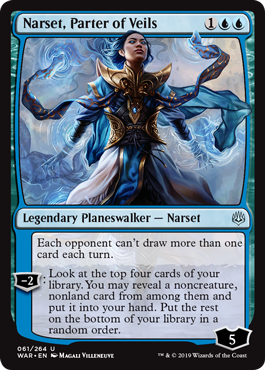 She certainly isn't blocked by his magic. Narset, Parter of Veils showcases Narset emerging through a surreal veil, bending parts of the veil as she moves through it. This piece is painted by Magali Villeneuve, who also painted Narset's first planeswalker card.

This is one of the new uncommon planeswalker cards, with a static ability and one loyalty ability. Her static ability feels inspired by her disciplined and controlled personality. No wild and crazy card draws while she is around. Narset also has a negative-loyalty ability, which means that she has a limited amount of time on the battlefield unless you have another card to play that increases her loyalty. For all the time Narset has studied and trained in solitude, this might be a good reminder to her that friends and allies are essential.

"Our own selves are the greatest obstacles to enlightenment"

Following her years of mystic and martial arts training under Dragonlord Ojutai, Narset has the ability to nullify magic used against her as well as intensify the magic of others. 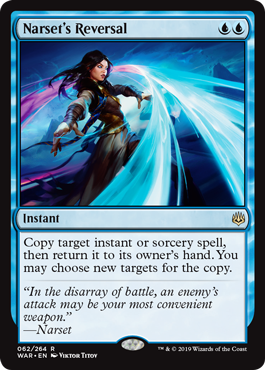 Narset's Reversal, painted by Viktor Titov, depicts Narset using the motion of her body to deflect and redirect the energy of a spell. The art description referenced "an aikido master using an attack's momentum to throw her enemy, except that the enemy is a spell." The magic changes from purple to blue, indicating that not only is she deflecting but also changing the properties of the magical attack.

The card itself lets you copy an instant or sorcery spell, then use it against new targets. Maybe she turns her opponents' magic against them, or maybe she duplicates an ally's spell and targets another enemy.

Keep an eye out for Narset during the War of the Spark Prerelease April 27–28. She also has a couple cameos inside War of the Spark: Ravnica by Greg Weisman, which will be available April 23, and if you want to catch up on Narset's backstory while you wait, check out the MTG Story archive!

"Still the mind and quiet the heart. Only then will you hear the Multiverse's great truths."