Like most Magic players, I mark time by Magic sets.

I started at Wizards of the Coast with Journey into Nyx.

The first time I started going to PTQs was Champions of Kamigawa.

My first real heartbreak was during original Ravnica.

I met my wife just before Magic Origins (fitting).

I married my wife just before Hour of Devastation (well that's ominous).

So that's where today's story begins, with a new player, a new set, and an InQuest.

The second deck I ever took to a store-level tournament (I use the term "store" loosely—back then we played in a mall food court) was a White-Blue Browse-Post deck that used Browse and Soldevi Digger to set up a kill (eventually) with Kjeldoran Outpost. Thawing Glaciers was there, too.

While that deck set me up to be a lifelong fan of doing nothing for long periods of time, my very first competitive deck and the deck that spawned my love of Alliances actually had no blue cards in it. In fact, it was red and green, featuring these two all-stars.

Yes, my first Standard deck (then called Type II) was land destruction. I found the deck in an issue of InQuest—an old gaming magazine that focused on Magic—that I can still picture in my head today. It was a five-page spread showing off the four best decks in Type II. The first was the Necropotence deck of lore, one of the best Standard decks ever. That was followed by Erhnamgeddon, a green-white deck featuring Elves and mana stones and Armageddon. Erhnam Djinn became much better when you didn't even have Forests in play. The fourth deck was Turbo Stasis. We don't like talking about that one.

The third deck listed was Red-Green Land Destruction. And it immediately caught my eye.

Of course, this was a time when it was totally okay to jam four Strip Mines into your deck. Oh, and also the mulligan rule didn't let you mulligan unless you had zero or all lands in your hand. And you had both Birds of Paradise and Llanowar Elves to cast Pillage, Thermokarst, or Stone Rain on turn two. If you were on the play and had one of these sequences (and it was pretty trivial to do so), your opponent basically didn't get to play Magic and you just kind of killed them with whatever you had sitting around. Usually an Erhnam Djinn or the card I held most dear to my heart for the longest time, the red Juzám Djinn.

I think I can even still recreate that old decklist from memory. Let's try it:

I loved Alliances so much that it's the only set earlier than Journey into Nyx of which I own a complete set. And I loved Balduvian Horde so much that I kept it in a glass screw case for years. The kind you see people keep Black Lotus in these days. I even still own my original Balduvian Hordes from that deck. They're both in my Alliances set. See? 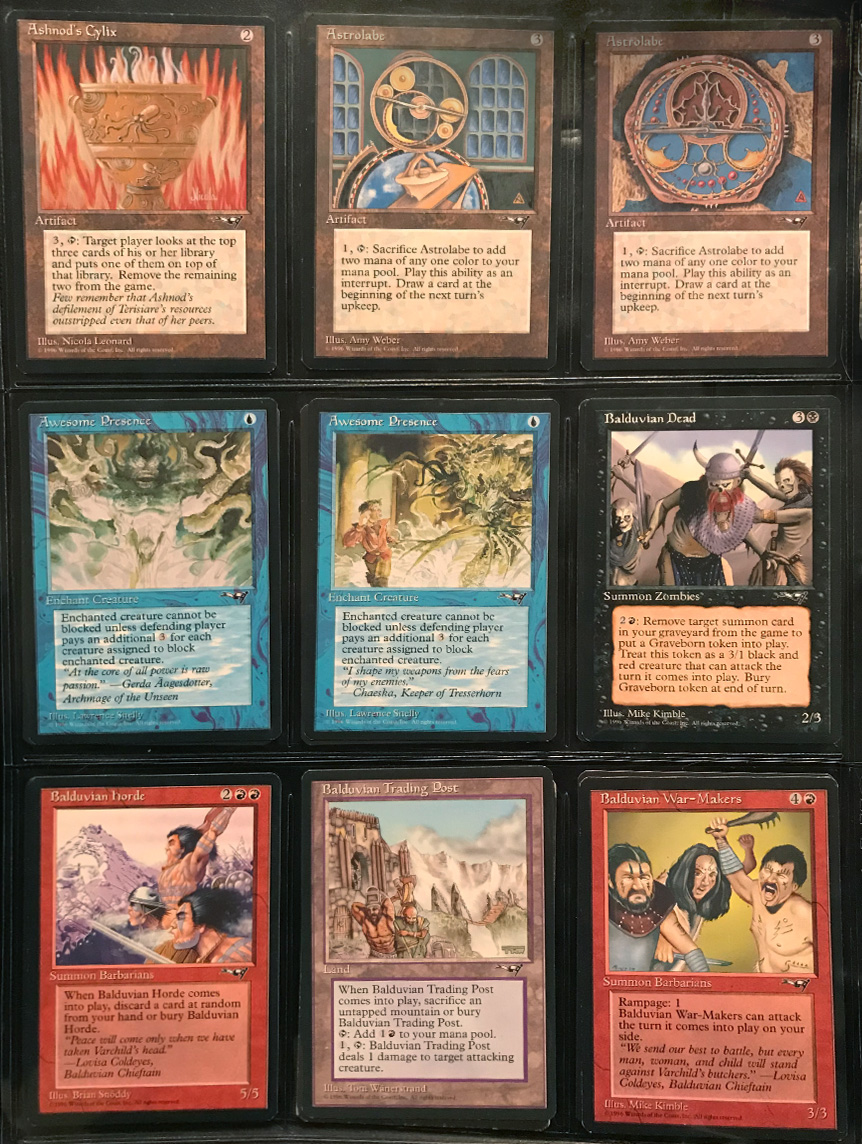 Suffice it to say, I loved Alliances back then, and I still have a nostalgic soft spot in my heart for the deck now. I try to jam Browse, Kjeldoran Outpost, Thawing Glaciers, Soldevi Digger, Diminishing Returns, Library of Lat-Nam, Exile, Helm of Obedience, Lake of the Dead, Lim-Dûl's Vault, Lodestone Bauble, Ritual of the Machine, Pillage, and more in decks whenever I can. And that barely scratches the surface of the cards that make me feel all the nostalgia from that set.

And that's the feeling I get from Masters 25 every time I look over the card list. Chills. Memories of that mall food court. Balduvian Horde hitting the board on turn three against an opponent with one land in play. It's a set just dripping with nostalgia—even if that nostalgia is a bit more, um, common these days. 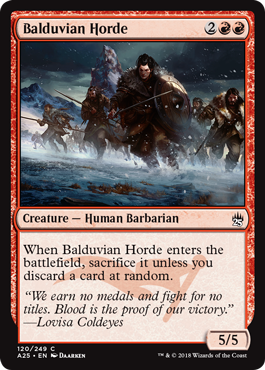 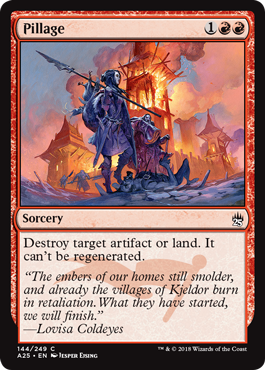 I'll admit, I felt a bit betrayed that Balduvian Horde is a common these days, but creatures are simply better now. Plus, Masters sets have a bit more oomph going for them. A 5/5 for four just isn't the world-ending threat it used to be.

But it's still very, very good, particularly in Limited, where the random discard might be worth it just for a board-dominating threat at only four mana.

Pillage, meanwhile, is simply one of the best land destruction spells ever printed. Armageddon does more, Stone Rain is easier to cast, and Sinkhole is cheaper, but none of them are nearly as flexible as Pillage.

But honestly? I don't even care much about their power level. The feeling that I'll get when opening them up in boosters will be plenty for me. Fourteen-year-old me will be grinning ear-to-ear.

Those first two decks of mine were copied from the pages of InQuest, as were many of my early decks. But, at some point, I became enamored with finding a different path, with crafting my own decks around unexpected cards. Usually, those cards involved drawing more cards. That's just how I roll.

So I have one more preview today that goes with one more trip down memory lane.

When the original Ravnica came out, I was a touch underwhelmed. Not because the set wasn't great (it was a revelation, really), but because I had to wait for Guildpact to get Izzet.

Izzet was my true love at the time, even before I knew it. And Ravnica had released a card that had caught my imagination even before Izzet came around.

Mindmoil didn't draw extra cards, but it did let you look at most of your deck over just a few turns if your other cards drew cards. Compulsive Research, Tidings, and friends let you positively tear through your deck to find whatever you needed. Assuming you had a ton of mana. Fortunately (well, for me), these cards were Standard-legal at the time:

Except it didn't really work to play blue and red together prior to Guildpact. So when Guildpact came out, I actually managed to trade for four Steam Vents during the Prerelease. That's how determined I was. The other card I sought out?

It was perfect for me—it rewarded you for drawing cards! Throw in Izzet Signet, and suddenly you could actually play Izzet Tron (in fact, it became a very good, very powerful deck during the time period). Only when everyone else was casting Wildfire and Demonfire, I was pairing Niv-Mizzet with Mindmoil to throw as much as 20 damage at someone in a single turn just by casting a bunch of Signets and draw spells. It was apex value town.

While Mindmoil won't be joining us in Masters 25, we are getting my favorite guild leader back again, complete with the original art and, importantly, the original flavor text: 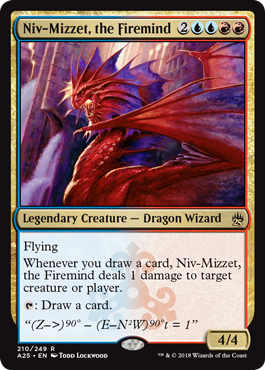 Chills, nostalgia, and memories of Magic past. Are these cards modern-day powerhouses? Nope. But they get me. They take me back to different times in my life. Stay tuned for the week of previews, because there are a lot more trips down memory lane to come.