It was Patrick Chapin who began dividing the creatures of Magic into two categories—Baneslayers and Mulldrifters.

The gist of it was that the best creatures in Magic—to which Baneslayer and Mulldrifter could both lay some claim—fell broadly into two categories: those creatures that were impressive primarily at attacking and blocking (Baneslayer) and those that derived their power from a non-combat ability, usually providing card advantage and usually right when it enters the battlefield.

I believe the dividing line was basically "If I kill this right away, did I get any value out of it?" If the answer was no, but it was still powerful enough to play, then it was a Baneslayer. If the answer was yes, then Mulldrifter.

So Tarmogoyf is a Baneslayer. Questing Beast, for all of its keyword soup, falls more into the Baneslayer camp. Cloudblazer, obviously, is a Mulldrifter. Yorion, Sky Nomad is your companion Mulldrifter.

Some cards straddle the line. Dream Trawler is mostly Baneslayer, since it doesn't provide an advantage right upon entering the battlefield but provides one later. Risen Reef is pure Mulldrifter, but its partner in crime, Omnath, Locus of the Roil, has a bit of both going for it (though is probably mostly Mulldrifter). Gemrazer does a great Mulldrifter impression while mutating but hits pretty hard for the cost.

Now, I should apologize to Patrick Chapin, because I'm doing this from memory and have very likely mistaken his philosophy on certain points. He's likely to disagree on some of my examples, and I'm sure we could have a long, fruitful discussion about cards where Omnath and Gemrazer sit. But one card I'm absolutely 100% sure we agree on when looking at the Baneslayer-to-Mulldrifter scale is today's preview card.

Welcome back to Standard, Baneslayer Angel. 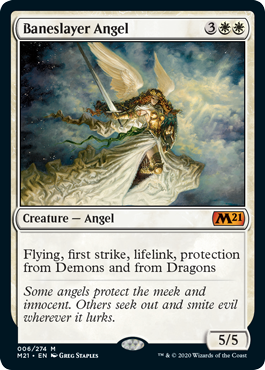 What, are you going to race it? Five points of lifelink damage kills very fast and puts your life total out of reach quick. Block it? Sure, best of luck against first strike and flying. Try to match it pound for pound? Yeah, most of the fliers who do that are probably Dragons or Demons.

Yeah, it dies to most removal spells and happens to fall just in range of Fry, but Baneslayer's not here for those matchups. It's here for those aggressive Gruul decks or to stop Obosh in its tracks or to kill quickly when your opponent thinks you've got no creatures in your deck.

That was a lot of the trick back in Baneslayer's initial heyday—playing a creatureless main deck and then, when your opponent sides out their removal, bringing in a creature that was, for all intents and purposes at that point, unkillable.

How Baneslayer will be used now is anyone's guess. It actually beats Dream Trawler in combat, and it sure does give any decks relying on a certain double-strike-granting equipment fits. It could likely bring Fry back in fashion for red aggressive decks because, let's be honest, they're unlikely beating a Baneslayer otherwise.

Welcome back, friend. You're no Mulldrifter, but that's kind of the point.