When Merfolk, Vampires, Pirates, and troublesome creatures of all types beset Dinosaurs on every side, Dinosaurs have little choice but to adapt in some incredibly fearsome ways. Conditions on Ixalan are harrowing for herds of giant, ancient reptiles just trying to make the best of their lives on Magic's newest plane.

I'm sure that, before they got reach, Grazing Whiptails were tired of seeing Wind Striders sail above their heads, while Carnage Tyrants were tired of being the target of one too many Contract Killings before they added hexproof to their text boxes.

To hunt their prey, Dinosaurs on Ixalan developed their effective Pounce, and, of course, the wildly successful Savage Stomp, which does the same job for a smaller cost and with the bonus of a +1/+1 counter.

With Rivals of Ixalan comes the newest terrifying Dinosaur evolution. On a plane where even the smallest creatures can join together to take down the biggest Dinosaurs, those Dinosaurs need to find a way to survive. The Polyraptor is the solution to that dino-conundrum. 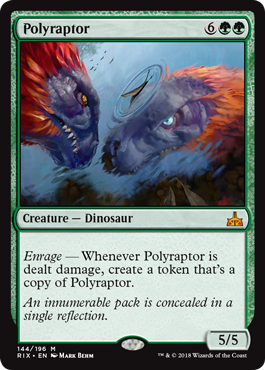 Like many of its Ixalan-based brethren, Polyraptor has enrage, the Dinosaurs' instinctual way of lashing out after being dealt damage.

Polyraptor requires immediate and non-damage-based removal, because anything else will only leave your opponent with more Polyraptors. Unlike big creatures that opponents can double- or triple-block, or chump block for a few turns, there's no way to get rid of a Polyraptor without a removal spell. There's no way to fight through one on the ground. There's no way to block one without having another spring up in its place.

It's said that a band of five 1/1 Vampires once tried to take down a Polyraptor, but when the dust cleared, the Vampires were dead and a Polyraptor stood there as though nothing at all had happened.

Though it's expensive at eight mana, Polyraptor's resilience will still make it a nearly unbeatable Limited bomb. When you're spending eight mana on a spell, you want to have some insurance that it's going to make a meaningful impact on the game. Polyraptor offers a bit of that insurance, because it won't just trade for a handful of your opponent's cheaper creatures, and it can block and attack with impunity. It's not guaranteed to win you a game, but if you're able to cast it, it's about as close to a guarantee as you can get.

I heard that a Polyraptor once got hit by a Firecannon Blast, and the cannon was completely destroyed, but when the raiding crew looked back, there was still a Polyraptor standing on the shore.

Limited also offers a few cards that can help you get full value from your Polyraptor. Fight-based removal spells like Pounce and Savage Stomp will make copies of your Polyraptor while taking care of your opponent's biggest threats. Spells like Rile can also trigger enrage, while instants like Dive Down will help your Polyraptor out in case of a Contract Killing or Legion's Judgment.

It's difficult to find a place for Polyraptor in leaner Constructed formats like Standard, but there could still be a home for it in Dinosaur-focused and ramp-heavy decks. Standard still has a fair amount of undiscovered territory, especially when it comes to harnessing the power of cards like Growing Rites of Itlimoc and its transformed side, Itlimoc, Cradle of the Sun, as well as ramp creatures like Drover of the Mighty and, from Amonkhet block, Channeler Initiate. With the right set of support cards, you could conceivably cast a Polyraptor as early as turn five.

Depending on your play group, Commander can be a friendlier place for a creature of Polyraptor's size. It's a powerful way to dissuade opponents from attacking you, and it can pair with other great Dinosaur cards like Register Alpha to give all those Polyraptor tokens haste, or Bellowing Aegisaur to give them all +1/+1. In a deck with the right amount of ramp and early defensive plays, Dinosaurs become a great set of powerful late-game plays, able to dominate the battlefield.

With tools like these at your disposal, harnessing a herd of Dinosaurs should lead you to savagely stomp your opponents at the Rivals of Ixalan Prerelease (starting January 13!) and beyond. Go forth and make tokens!