The Rivals of Ixalan Prerelease begins January 13! Check out the Card Image Gallery to see all the cards waiting to be uncovered in the golden city of Orazca.

Mystical power and mysterious devices are at the center of many fantasy tales. In Magic, we've seen the Mirari, the Helvault, the Golgothian Sylex, the end of the Implicit Maze that made Jace Beleren the Living Guildpact, the Planar Bridge—you get the picture.

These devices are all unique in what they do, and unique in why our heroes and villains run into conflict over them. And if you think the mysterious city of Orazca, where a powerful and mystical Immortal Sun resides, sounds similar, you'd be right.

Unfortunately, the Immortal Sun isn't the only intriguing device hidden away in the golden city. This is Azor's Gateway, and it's a powerful artifact that will bring you into conflict with opponents: 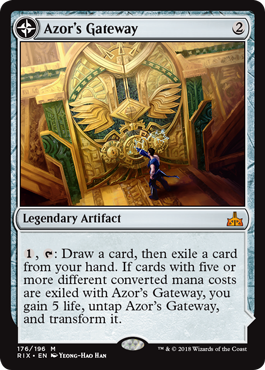 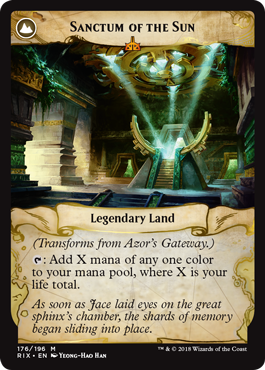 Your Window to Opportunity

Azor's Gateway is a transforming artifact, like those you've seen in Ixalan. The same structure applies: meet some specific conditions, then it transforms into a land that offers a powerful ability. The payoff for Azor's Gateway—the land Sanctum of the Sun—is easy to understand: the more life you have, the more mana you have.

First, you need a deck with a wide mana curve. While an extra land will handle a converted mana cost of 0 for you, having enough spells to cover four more mana costs can be tricky. Spells like Opt and Cathartic Reunion can fill smaller cost slots and serve as ways to find the bigger costs you need. And regardless of the kind of deck you'd put Azor's Gateway into, the Gateway itself will help you dig to find the mana costs you need to make the most of it.

Second, you'll want to transform it as quickly as possible. While Standard offers a paltry selection of options in Vizier of Tumbling Sands, Dramatic Reversal, and Paradox Engine, adding in the ways to untap permanents that are available in Magic's other formats lets you use its ability more than once in a turn. Azor's Gateway, even transformed, doesn't affect the battlefield. Opponents who observe the Gateway coming online will press hard to take down your life total and/or immediately destroy the artifact with Abrade and friends. Being efficient, and getting multiple activations out of just one turn, can make the difference between a broken chair and a mana-bursting land.

Finally, you need mana dumps to pour into. A mana dump is anything that you can spend a ton of mana on for larger and larger returns. Creatures like Walking Ballista and Jungle Delver will use all the extra mana you can give. The aftermath side of Cut // Ribbons and our friend Nissa, Steward of Elements are impressive ways to put a lot of mana to work. Formats like Commander are packed with ways to make a life total worth of mana into a battlefield of value.

And it obviously works with its namesake, Azor, the Lawbringer, to quickly cascade the value every time you attack, gaining life and drawing cards to cast off all the extra mana you'll have on the next turn, when attacking and drawing more is entirely reasonable.

So where can all of these requirements be met? While I'm obviously a fan of most cards in Commander, the reasons why Azor's Gateway works in the format match up to what you can do there.

Mana-efficient ways to filter cards in your hand help your deck. Thanks to the "only one copy of a card" rule to the Commander format, effects that draw cards—even if you have to discard another to exile after—help smooth out the randomness of your decks. While there's nothing better than directly "tutoring" for a card (see Whir of Invention, et al.), the ability to get an extra card or two deeper every turn adds up. Azor's Gateway can transform into a powerful land, but before then it will push cards through your hand—and help you answer whatever shenanigans your opponents are up to.

You have more time to set up your plays. Generally speaking, Commander games are longer and lean toward big and flashy effects we love. Azor's Gateway needs time to transform, even if your deck can get multiple uses in one turn. That time is something you get more of in Commander. While multiple opponents means multiple players that could destroy our artifact, it also means multiple players that could be targeted instead of you. If you don't look threatening, you increase your odds of visiting your Sanctum of the Sun. Let someone else draw attention, and keep your explosive plays secret until it's time to use them.

You start with more life. What's better than tapping for ten mana? How about 30? Not only does a slower format like Commander give you time to set up and offer others as potential distractions from your plans, it also gives you more life to begin with. Even if you take a few hits to the chin on your way to Sanctum of the Sun, having "only" 20 or so life when Azor's Gateway transforms looks pretty good. Add in commanders like Oloro, Ageless Ascetic or cards like "mana ramp meets burn spell when you have Sanctum of the Sun" Exsanguinate, and snowballing your extra starting life into a Commander win is easy to envision.

So we know what Azor's Gateway is and we know where it makes sense to use. Where do we go next?

If you're inside Commander, then there are a few obvious decks this will fit into perfectly. Consider the common-for-Bant-untapping-business commander Derevi, Empyrial Tactician. NaldoTheNidoking's build is made to take advantage of untapping things, and finding room for Azor's Gateway alongside Paradox Engine and friends should be fun:

Bant is a color trio that opens up access to powerful ways to get multiple uses out of Azor's Gateway quickly. Seedborn Muse, Kiora's Follower, and the commander Derevi herself are powerful ways to get extra actions from the Gateway, while Genesis Wave, Sphinx's Revelation, and Chord of Calling provide payoffs for all the extra mana. Azor's Gateway also helps filter to more useful cards if transforming isn't the option you need, ensuring you can have a timely Supreme Verdict or Mind Over Matter to turn the tide back in your favor.

But I think it's with a commander like Oloro, Ageless Ascetic that Azor's Gateway will unleash its fullest power.

1 Sphinx of the Steel Wind
61 Cards

What Carlitod put together is a pretty classic take on using Oloro and life-drain effects to take control of a game. The deck is designed to gain a ton of life and give you incremental benefits for doing so all along the way. Cards like Authority of the Consuls and Kambal, Consul of Allocation constantly pad your life for things your opponents need to do, while Sanguine Bond and Crested Sunmare give your opponents more obvious threats to worry about over Azor's Gateway.

With all the extra life, having time to transform the Gateway is easy. Once you do, you unlock angles to attack opponents that they may not be expecting.

Plus there's got to be room to fit Azor, the Lawbringer into this Oloro, Ageless Ascetic deck. They're going to be BFFs for sure. 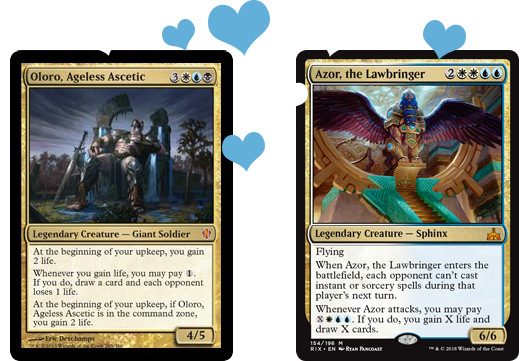 Ultimately, long-game payoffs and filtering cards will always lend themselves to more controlling decks, even in a slower format like Commander. If you have a friend who likes to use these kinds of effects—or you need a new way to up the ante in your own deck—then Azor's Gateway demands your attention.