Teferi, Who Slows the Sunset

Planeswalkers have always been my favorite card type to design. There are so many abilities, numbers to tune, and opportunities for conveying strong flavor and personality for the character. It always feels as though, if you keep working, tweaking, and iterating that you can get things just right. As a designer, one learns quickly that not everything always plays out in the real world exactly the way you intended it, but there's satisfaction in the journey and the destination.

We plan out our Planeswalker lineup many sets in advance, and it's a joint effort between our Art and Story teams in terms of the characters we'd like to feature and our game balance designers in terms of making sure different colors and gameplay styles are represented.

On the plane of Innistrad, where day and night cycles are such an important part of everyday life, a time-magic specialist like Teferi is a perfect fit, and you'll find out that he plays an important part in the story of Midnight Hunt. We knew we wanted his card to be white-blue, as some previous Teferi designs had been, in part to counterbalance planeswalkers of other colors in Midnight Hunt and surrounding sets. Beyond that, we were starting with a clean slate, mechanically speaking. Where to begin?

Let's take a look at the finished card, then I'll walk through how we came to Teferi's final abilities and numbers: 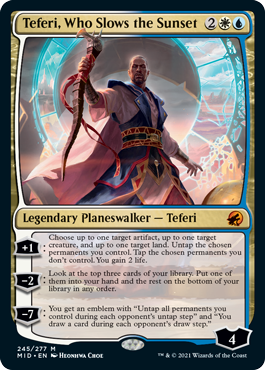 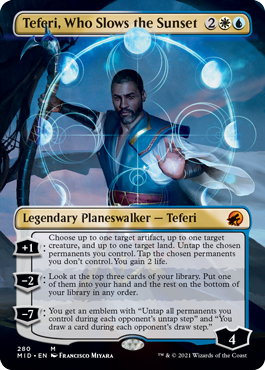 Time magic is always challenging to design for. Many of the most iconic time-flavored spells are huge splashy effects, like taking extra turns or refilling one's hand with cards. Others can lead to repetitive gameplay patterns, like bouncing creatures or putting them on top of their owner's library. Both categories are design spaces we need to be careful with when structuring planeswalker abilities and loyalty schemes. The trick is finding abilities that feel time related but are "bite sized" enough that they can slot in as an individual loyalty ability.

In fact, we tested a few early versions of the card in our internal rare poll, and many of our initial tries at novel time-flavored abilities got negative feedback, either because they looked too hard to use well or didn't look fun to play against. I won't spoil exactly what those abilities were here, as there are bits and pieces of them that I think we can shape into a fun card in the future. But for the time being, it was back to the drawing board.

In designing a white-blue Teferi, we knew that players would naturally make comparisons to previous versions of the character, especially Teferi, Time Raveler from War of the Spark and Teferi, Hero of Dominaria from Dominaria. Both designs played out a little higher than we'd hoped internally from a power-level standpoint. My idea for Teferi, Who Slows the Sunset was to have it be a little bit more of a build-around so we could land on a design that was still powerful but not as ubiquitous.

As the lead of final design for Commander (2014 Edition) many years ago, I looked to Teferi, Temporal Archmage, his original planeswalker card, for inspiration. I really like the permanent-untapping ability we'd used on that card and reasoned that if we restricted it to one of each permanent type it would encourage some interesting deck building while allowing us to position it at a more generous rate. We baked in the option to tap opponents' permanents as well to give the card additional utility, especially in the case where you don't have an artifact or creature.

If you can untap multiple mana-producing permanents with Teferi's +1 ability, it's quite powerful. Some of the interactions we tested internally were pairing him with green mana creatures or with artifact mana, including the recent Treasure Vault from Adventures in the Forgotten Realms. I also imagine it's a good fit in Cube, as many folks' cubes feature lots of strong colorless mana producers.

Once we were happy with the first ability adding a bit of build-around nature to the card, we looked toward something a little more generically useful for the second ability. Since the first ability focused on temporary advantage, it made sense for the second ability to be more about card advantage in the long term. We tried a couple different variants here, including scrying, looting, and an Augury Adept-style, "reverse Dark Confidant"-type action.

After some discussion, we decided we liked life gain better on the first ability and that a short and sweet Anticipate effect did what we wanted in a clean and space-efficient way. (Another challenge of planeswalker design—they can get wordy quickly, and sometimes you run out of space to write the abilities you want.) Having some additional selection on the card draw ability meant it was easier to find other cards that work well with the first ability and that proved satisfying in testing.

Teferi's ultimate was the last ability to get nailed down, which is often the case when we design planeswalkers. Strangely, even though the ultimate ability is usually the flashiest and coolest-to-read part of a planeswalker card, it's often the least balance-sensitive aspect. Planeswalker ultimates usually fall into what we call the "win more" category, meaning they tend only to happen when you've already been in a winning position with an unanswered planeswalker for several turns. You're likely to win the game regardless, and the planeswalker's ultimate might be how you win but not necessarily why you win.

That being said, we often have specific goals for planeswalker ultimates in terms of shoring up weaknesses in the other play patterns of the card. In this case, I reasoned that in an empty board state, or a small board stall, Teferi could remain in play using his +1 each turn without advancing the game state much. Therefore, I wanted an ultimate that would start to move that game state along quickly. By providing additional card flow, the emblem will help you advance your game plan, and since it untaps your permanent, you can feel free to attack or spend your mana without the worry of leaving yourself vulnerable. We also liked how the emblem scales in multiplayer games, as keeping a planeswalker around for several turns in multiplayer can be quite a challenge.

Once we had abilities in place that we were happy with, we worked with the Play Design team to hammer out specific numbers for the loyalty scheme and playtest the card. When balancing numbers on cards, we often look to past examples that are similar and most likely play out at a good power level in the real world.

I compared Teferi's first ability to Garruk Wildspeaker's +1 ability for the purposes of generating mana. Teferi's ability has higher potential but requires building around and won't always reach its maximum potential in any given board state. My guess was that it would average out to be about as powerful as Garruk's.

For Teferi's second ability, my comparison was Jace, Architect of Thought's -2, which is similar in terms of giving you card selection from among your top three cards (Jace's ability is a little stronger). We usually start four-mana planeswalkers with 3 or 4 loyalty, as that's about the sweet spot where early creatures can challenge them without completely running them over, leading to interesting choices of what loyalty abilities to use in what order. By comparison to Jace, Architect of Thought and noting that using the -2 ability twice in a row approximates a Drawn from Dreams (as a "floor" for the card in a typical game state), we thought 4 starting loyalty looked like a good place to start.

This is, of course, a little bit of an oversimplification of the initial costing discussion, but I hope it gives a sense of how we can estimate a good set of numbers to start testing with. Ultimately, it's the actual playtesting itself that gets us to the right final numbers. In this case, our initial estimates were playing out well and Teferi was coming in at a good power level. We were also happy with the differing gameplay patterns in terms of what order players were using the +1 and -2 abilities in over the first couple turns.

In the end, we arrived at a planeswalker design that we think is flexible and powerful, while requiring some amount of build-around to unlock its full potential. A great place for a card to end up! Thanks for joining me on this walk through the planeswalker design and balance process. I hope you enjoy playing with Teferi and the rest of the Innistrad: Midnight Hunt cards as much as we enjoyed designing them!