Among Magic's more than 16,000 cards, there are a lot that I like. Yet, every time someone asks "What's your favorite card," there's always one that comes to mind—and that's the card I'm previewing today! 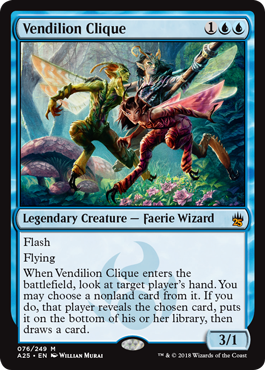 Even though I love Vendilion Clique now, it wasn't love at first sight. The first time I played it was at Pro Tour Hollywood 2008, and it was only a last-minute inclusion. This was the list I finished in 8th place with:

There were three Vendilion Cliques there, but they narrowly won their spots a couple of days before the tournament. For most of testing, this slot was occupied by Pestermite. In retrospect, it's laughable that this was even a point of contention, since Vendilion Clique is a much better card and perfect for this deck. But at the time it was released, no one really knew how powerful Vendilion Clique was. It ended up being great, and was a big part of why Faeries turned out to be such a dominant deck throughout its time in Standard.

Vendilion Clique is at a perfect spot power-level-wise. It's a strong enough card that I actively want to play it, yet it's not so oppressively strong that I am compelled to play it every time, or that I get frustrated when my opponents play it. It helps you win the game, but it doesn't dominate a game by itself.

2. It's a very versatile card, and plays differently every time you draw it.

A lot of creatures are very intuitive to play with—they're basically bodies that attack or block. You have a choice of when to cast Tarmogoyf, and whether you want to attack with it or not, but that's it; the play pattern is always the same. With Vendilion Clique, things are different.

First, you must decide when to cast it. Since it has flash, that can be basically any point in the game. I've cast Vendilion Cliques on my main phase, on my end step, on my opponent's upkeep, on their draw step, after they attack, after blockers, and on their end step—each for a different reason. My favorite move is probably playing it in response to a spell that you know is going to precede another spell, such as a Ritual. Sometimes, your Storm opponent goes Ritual, Ritual, and then in response to the third one you play Vendilion Clique and take their Past in Flames or Ad Nauseam, at which point they have wasted all their Rituals. It's also great against cards like Show and Tell and Through the Breach, because you can take away whatever creature they were planning on playing.

After you choose the right time to play it, you then have the choice between targeting yourself or targeting your opponent; sometimes you have a useless card or you're digging for something, and Vendilion Clique helps you. After that, you can choose to take a card or leave your opponent's hand as is. It just offers so many options, and each player will play it differently.

3. It's a card that allows you to turn the clock and start attacking.

Most blue decks are reactive by nature, so it would seem that a 3/1 flier wouldn't fit the profile very well. But the combination of flash plus a very useful ability ensures that even the most controlling decks are interested in the card, and it always ends up allowing your deck to do something that it otherwise cannot do.

When you play a blue control deck, you usually have inevitability, but not always. Given enough time, some people will beat you, even through a barrage of counterspells. Decks like Tron can go over the top of you, and combo decks can stock up on Dispels and other cheap counterspells. With Vendilion Clique, not only do you get to look at their hand and take away a combo piece, but you also get to start attacking! Now, 3 damage might not seem like much, but it adds up, especially if you're playing a format with fetch lands and shock lands. For this reason, Vendilion Clique is a very popular sideboard card for when you need to pressure your opponent a little. In fact, I played it recently at Pro Tour Rivals of Ixalan!

In this deck, Vendilion Clique is especially good, because you have burn spells to complement it, so the game will be over in three or four attacks instead of six or seven. It's the card I side in the most, because it's so versatile. Not only does it pressure and disrupt your opponent, it also kills planeswalkers, blocks Signal Pests, and so on.

If you have the chance to play with Vendilion Clique, I wholeheartedly recommend you do so. It'll be a different card every time you draw it, and you'll find many cool tricks to do with it as you play with it more and more.