Welcome to Flavortown! (Or Not)

It's not a secret that I love fun. Not just the fun of cracking a booster pack for Sealed or seeing a sweet new card preview, but the fun of playing Commander a bit too late into the night, running a Pauper cube that's been copied and remixed by dozens of enthusiasts, writing a column (right here!) literally titled "Serious Fun" for years—the more different and wild and unusual the Magic fun, the better I like what's happening.

I was around when Unhinged dropped back in the day. I have a complete foil collection of the set. The return of Un-fun is something I am, to put it mildly, overjoyed to see.

(And some other stuff too: https://t.co/HaqvDVNqQF )

Un- sets aren't like other Magic sets. I'm not talking about how the cards have silver borders and aren't legal to play in competitive events. I mean the experience and gameplay they create are different. Wild, weird, and wacky things you cannot expect are baked in. Even if you just use a handful of offbeat cards, the effects cascade.

One trick Unhinged had was a "words matter" theme. Carnivorous Death-Parrot makes "gotcha" cards more powerful for opponents, but is a flying Grizzly Bears in my cube. Double Header is in my cube as well, as it hits a surprising number of permanents, like Grizzly Bears (and Star Compass and Armadillo Cloak and Azorius Guildgate). Tainted Monkey was one of my favorite cards to draft, since choosing "the" means your opponent will lose life almost every time.

But one of the many ways words could matter was the artist of the card. Suddenly, the basic lands you played should match—or not—for more reasons than personal aesthetics. Minimizing the power of an opponent's Circle of Protection: Art or Framed! was a sideboard and deck construction consideration.

I'm delighted to share that Unstable is bringing flavor back. Presenting Ineffable Blessing: 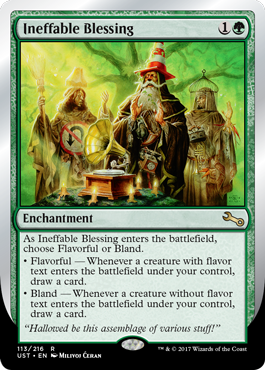 With the obvious disclaimers and token shenanigans out of the way, let's put on our best Frank Karsten impression and look at a few numbers. Across all of Magic, there are more than 6,250 creatures with flavor text, and more than 3,080 creatures without. On the surface, that's two-to-one odds on a random creature having flavor text, so the choice to go for "with flavor text" on Ineffable Blessing is a no-brainer, right?

In Unstable Draft, you'll find seven green creature cards with flavor text and eleven without. Across the entire set, it's 48 with flavor text and 56 without. If you're drafting Ineffable Blessing early and can plan accordingly, it isn't tough to swing one way or the other. This is pretty typical of a build-around kind of Draft card, though finding it in the third pack will definitely feel disappointing if you wanted to visit Flavortown. 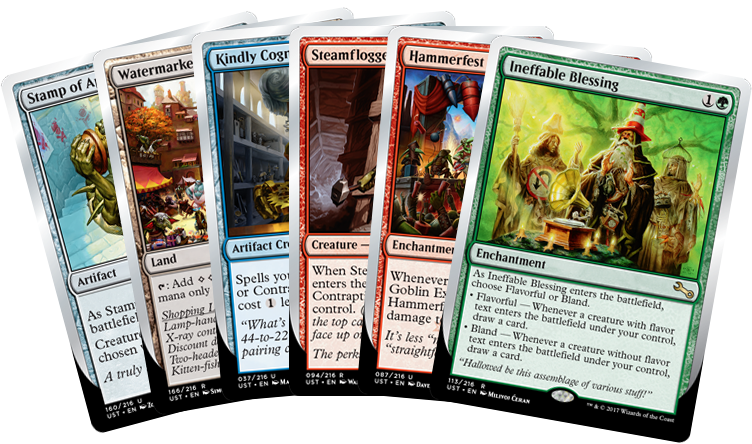 But the best part of Un- sets is what you do with the cards afterward. In a format like Commander, many powerful and splashy legendary creatures don't have flavor text. Your commander, if you plan to play it repeatedly—see Rhys the Redeemed or Derevi, Empyrial Tactician—can be an excellent source of card draw. That said, looking across a lot of decks on EDHRec.com and pulling out all the top creatures yields a mix that's closer to even.

Getting into the popular green creatures tells one tale:

Looking at all creatures reveals a similar pattern:

Making the most of Ineffable Blessing in a wacky Commander deck will require some trade-offs; you don't want to just jam all of one or the other, since you have to play lands and will want some noncreature spells in the mix too. (And that's before adding a color like white or black to be able to find Ineffable Blessing early enough to take advantage of it.)

There's one tiny little detail we didn't hit yet: cubes.

Cubes add a whole new layer of possibility for making Un-fun happen. While getting started with a cube is pretty straightforward, thanks to Melissa DeTora's wonderful introduction last year, taking it to a new level is entirely up to the designer. While I went all-in on commons as the key differentiator for my cube versus others, Unstable is a treasure trove of interesting opportunities.

Ineffable Blessing is exactly the kind of card that can kick off an archetype in a cube. Making specific choices about versions of cards—say, the Magic 2015 Game Day promo copy of Reclamation Sage versus the Commander Anthology version—to twist how good Ineffable Blessing is can craft a refreshing experience. If you go all-in on a bigger theme like a vanilla creatures cube, more creatures will have flavor text, and related cards like Muraganda Petroglyphs can shine, too.

It's also a way to add tension to cube drafts. If flavor text matters, do you draft the flexible-and-keeps-my-colors-open-with-flavor-text Burnished Hart or the obviously-more-powerful Yavimaya Elder? One of the secrets to good cubes, in my humble opinion, is creating not necessarily more decisions but more interesting decisions that matter. Ineffable Blessing, in the right cube designer's hands, will offer some fascinating ways to think about drafting cards.

Like dropping it right into a cube with token-making as a theme. Just saying.

Unstable isn't your typical Magic release, but it's full of ways to twist the ordinary to extraordinary. Whether you like your decks flavorful or bland, you'll find something to your taste when the set releases on December 8!