Why We Make Hate Cards

Hello! Today I'll be showing you a type of hate card that we sometimes refer to as a "hate bear." But before I actually show you the card, let's talk about what a hate card is and why we make them.

A hate card is a card that's role is to fight a certain strategy. It specifically targets a deck, a single strategy, or even a single card. There are cards that are good against a broad range of decks, but are not classified as hate cards. Hate cards target one thing. They are generally not very strong in a vacuum, but against the strategy you are trying to beat, a hate card can be incredibly powerful.

For example, let's take a look at two cards, Pyroclasm and Tivadar's Crusade. Both of these cards are pretty good against Goblins, but I wouldn't call Pyroclasm a hate card. Pyroclasm is a strong card against small creatures. It's great against decks like Mono-Black Zombies, Elves, Merfolk, or just any aggro strategy, including Goblins. Pyroclasm isn't very effective against Goblin Goon or a pair of Goblin Chieftains, but it's still strong against a wide range of decks.

When we are designing cards to meet Future Future League needs, sometimes we design hate cards to target a specific deck. It's possible that a strategy is stronger or more dominant than we thought it would be. In these cases, we will add a card to the environment to "hate out" that specific card or deck, especially when that card or deck is something we can't change.

Another type of hate card is a step down from a targeted hate card like Tivadar's Crusade and also the type of card that we make way more of. These types of cards are what I like to call "safeguards." They don't target a specific deck or card but instead act as a safety valve against a range of strategies in case one or more of those strategies get out of hand. For example, Solemnity from Hour of Devastation was a safeguard against energy and against +1/+1 counters. We weren't sure how strong those strategies would be in the real world, but we wanted to have an option for players in case they wanted something specifically targeted for those decks.

Now that I've explained the types of hate cards, what is a "hate bear"? A hate bear is a hate card that is attached to a creature. Many hate bears are attached to 2/2 creatures for two mana, which are the stats of Grizzly Bears, and that's where the name originated from. However, the creature does not have to be a two-mana 2/2 to be a hate bear. In R&D, we usually refer to any creature that has an ability attached to it for the purpose of hating something out as a hate bear, regardless of stats.

Today's preview card is a hate bear that is an example of both a targeted hate card and a safeguard. 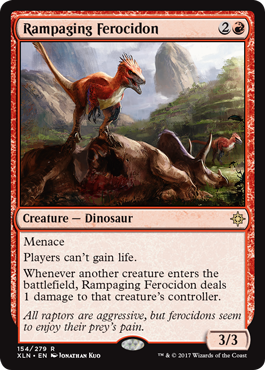 Rampaging Ferocidon has two lines of text that are there to hate out various combo decks. Many combo decks, especially in older formats, can "go infinite" if they assemble the right cards. These infinite combos could be in the form of gaining infinite life or creating infinite creature tokens. This card can act as a safeguard against those decks. Even if your opponent has answers for this card, they must have the answer if they want to win, which could buy you enough time to find more answers to their combo or even win the game yourself.

In Standard, infinite combos exist as well. These combos aren't as potent or consistent as the combos in a deeper format like Modern, but the existence of this card can keep those combo decks in check. Having an option like this for your sideboard can be incredibly useful if the metagame calls for it.

Even if you're not playing against a deck like that, Rampaging Ferocidon can still do a ton of work against a broad range of decks. For example, this card can be a beating against aggro decks. They will be taking incremental damage any time they play a creature while you beat down with your 3/3 menace Dinosaur. It will be hard for your opponent to catch up if they are under constant pressure. If their life total gets too low, it will be risky for them to add creatures to the battlefield.

The "can't gain life" ability is a safeguard for the format in case some of the life gain was stronger than we predicted. There's a lot of life gain among the Ixalan Vampires, and this card is a great answer to it. Additionally, you never know what kind of powerful lifelink creatures will pop up in the future, so having this option in Standard can go a long way.

The rational beyond putting these abilities on a creature instead of something like an enchantment or artifact is twofold. One, it's a threat, so that even if you're playing against a deck where these abilities aren't useful, you can still play a 3/3 body as a creature to fill out the curve in your aggro or midrange deck. Two, since it's a creature, it's easier to deal with. People do not tend to play artifact and enchantment removal unless a metagame calls for it, but creature removal is everywhere. Having an out against a hate card makes for more fun gameplay between both players, and games come down to interaction from both sides instead of a mini-game of "did I draw my hate card."

I'm excited to see what Rampaging Ferocidon will do in Standard. Thanks for reading, and enjoy the rest of the Ixalan previews!