Elves are one of the most perennially popular creature types, and a high-fantasy fairy-tale world wouldn't be complete without them. Speaking of fairy-tale worlds, they're populated with all sorts of charmed, magical, and storybook creatures, and today's preview card is poised to take advantage of the plethora of non-Humans making mayhem on Eldraine. 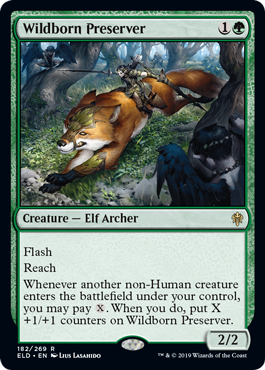 Wildborn Preserver does everything, and by "everything," I mean "joust, fight, and shoot a bow and arrow while riding a giant fox, which is all very impressive." I love this art from Lius Lasahido, featuring an elf with more weapons than I can name astride an enormous fox, hurtling through the woods while the winged creatures in the corners get the heck out of the way (a lovely little nod to the fact that Wildborn Preserver has reach).

The great news is we'll be able to see more of this great art in the full-frame Collector Booster version of this card. 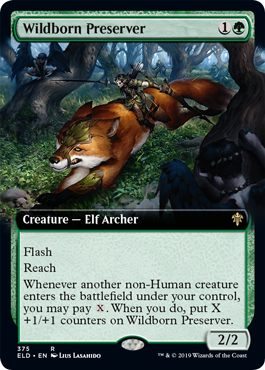 Okay, enough about the (gorgeous) surface of this card, time to dive into what it can do.

Like I mentioned at the beginning of this article, Wildborn Preserver wants a deck full of non-Humans. While I personally am holding out hope for a lot of Goats, because fairy tales are weirdly full of goats, there are also more straightforward options available. After all the time we just spent on Ravnica, now is a perfect time for an Elf who wants to spend time with other Elves.

There's card-drawing all-star Beast Whisperer, plus Golgari Findbroker for players who really want to maximize their value. There's Paradise Druid and Incubation Druid for anyone who wants to ramp into as much mana and as many colors as they possibly can. Pelt Collector is here for those who prefer aggro, while Frilled Mystic, the infamous Elf Lizard Wizard, provides if counterspells are more your style.

There are countless options if Elf tribal is the way you want to go. In particular, there's a lot of room to play with +1/+1 counter synergies, something that Wildborn Preserver does especially well. Pelt Collector, Growth-Chamber Guardian (an Elf Crab Warrior), and Wildborn Preserver are all early creatures that are easy to get +1/+1 counters on. Then Pollenbright Druid and Evolution Sage, also Elves, can quickly spin those counters out of control, until your little team of Elves is, well, a bigger team of Elves.

Synergies aside, Wildborn Preserver has one of the most coveted qualities in Magic. This is usually where I'd talk about card advantage, because, wow, do I ever love card advantage, but not today, friends, not today. In this case, Wildborn Preserver scales with time. It's a card that is great on turn two, giving you an early attacker or making sure you don't fall behind, but it's not going to stay a 2/2 forever, meaning that it's still relevant in the late game.

The fact that you can pay X to put X counters on it, instead of having a fixed number of possible counters, makes the ability particularly potent. Having a place to sink a lot of mana when you've been heavy on lands and short on spells can salvage a bad situation. Shining in both the early and late game is the sign of a great card, and Wildborn Preserver does it with panache. I foresee this card getting out of hand quickly, and I can't even begin to guess what the cap is on the number of counters we'll see on Wildborn Preserver during our time on Eldraine.

This is all great, and we haven't even made our way through all of this card's abilities yet!

It's happened more times than I can count. The path ahead is clear, I'm ready to attack my opponent with my team of creatures, and then I stop. I take a long look at all that open green mana on the other side of the battlefield.

"What creatures with flash are in this set?"

This card is already so sweet that flash feels like the cherry on the sundae. Wildborn Preserver can flash in and block. It can leap in on your opponent's end step as a surprise attacker on your next turn. I love the option to cast spells on my opponent's turn, and I equally love deciding to wait it out. I can see myself doing that with Wildborn Preserver—casting it early if my opponent just flooded the board with creatures, or waiting until I have a creature on the stack, then flashing this in and adding counters immediately to evade any damage-based removal.

The same goes for reach. Green can struggle when its opponents take to the skies, but Wildborn Preserver has its eyes on the skies, making sure you don't fall to a handful of pesky Birds.