Destruction in Commander isn't easy. Not even if you're Jund—the combination of black, red, and green mana known, amongst other things, for being able to destroy just about anything it wants.

Removal tends to be singular:

In a multiplayer game, singular removal lets you stop one player's schemes, but at the opportunity cost of slowing down another opponent's dastardly schemes. Stopping one player just pushes one player back and still allows you to be outpaced by everyone else.

Indiscriminate removal blows up the world for everyone, resetting the board state. This keeps everyone at the same level, which is great when you are falling behind, but not great if you are ahead. If you are being clever and account for your own board wipes to make them asymmetrical, congratulations! You're a target now.

The underlying problem with blowing up people's stuff in multiplayer Magic is simple: nobody likes having their stuff blown up!

Removing a key permanent from one player might make you an enemy to become entangled with in a back-and-forth battle while the rest of the table moves ahead of you. Removing every player's permanents potentially makes an enemy out of every player at the table. At the very least, you're unlikely to be on anyone's "best ally" list.

Making friends and managing enemies is the extra tactical layer that defines multiplayer Magic. Because it is one or everything, removal in multiplayer games is generally bad politics. But what if you had removal with which you could be more selective? A spell you could use at the table to make a deal like this:

"Hey, I'll kill these two players' heavy hitters if you leave me alone for a turn."

What if I told you Commander (2018 Edition) is bringing the Jund theme deck a spell that can bargain with any Planeswalker not named Urza? 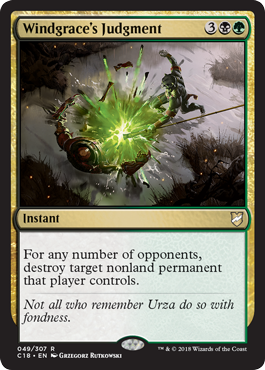 Sorry Urza, but your stuff is getting wrecked every time.

As we've hinted at, the core of Windgrace's Judgment is the supreme versatility in what gets blown up. You can select any nonland permanent you can target to destroy, which by itself is great; there is nothing worse than holding a Hero's Downfall when the opponent you need to stop is all artifacts. On top of that, you can select one, some, or every opponent at the table.

Windgrace's Judgment is a tool that allows you to surgically remove the biggest threats at the table for any opponent, which means it is quite the bargaining tool. Sure, you can just blow up every opponent's best card every time. Often that's the right decision, but it is worth taking a moment to see how you could leverage the use of the card in a political sense. Is there a player who is little threat to you that you can spare and encourage to form an alliance with you for a time? A board wipe just cleans out that potential ally's board state, but Windgrace's Judgment can skip over them. It's always better to not blow up your ally's stuff!

There may be some situations where it might be you and most of the table trying to catch up to a group of opponents who is clearly ahead. Windgrace's Judgment will let you create more parity without destroying a whole board state.

The other thing that makes this card great is its timing. This effect would be strong as a sorcery, but as an instant, its power is much higher. During any point in a game, you can alter the board states of any opponent you want. You can stop a commander swinging in for lethal, disrupt a game-winning combo, remove a critical blocker, and more. In a way, Lord's Windgrace serves as a permanent-focused counterspell of sorts, disrupting the plans and actions of several opponents at once.

Like Windgrace, your judgment on what needs to be on the board becomes very powerful.

Windgrace's Judgment offers great flexibility, but it clearly needs the support of other removal. Sometimes you need to blow up the world. Sometimes you need to blow up just one troublesome enchantment. In addition, the card's cost is large enough to make it hard to keep mana open for it while advancing your own board state. It doesn't work well in the early game, but in the mid to late game, even the threat of this card can give you some leverage against your opponents, assuming you use, err, good judgment.

I can't wait to slide this into my Jund Commander deck, where it will be a great, versatile tool. I could also see it be useful in a disruption/removal based "Rock" style deck. What decks do you want to use Windgrace's Judgment in?