wind that ambles through Goldmeadow mixes the smells of spring wheat and oiled battle-leather. Goldmeadow is one of the smaller clachans; its few buildings are ringed with farms. But for every farmer and springjack shepherd tending the fields, there's a soldier in training for the peasant militia. Sometimes they're even one and the same. After all, there's not that much difference between threshing your wheat at harvest-time and chopping at pesky boggarts out to raid your cellar pantries. 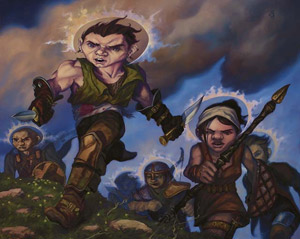 To know our kithkin, we first have to know their minds, how they think and feel. The fundamental force that drives kithkin psychology is the thoughtweft, an almost subliminal understanding of the minds of other kithkin. Thoughtweft naturally binds kithkin together into tightly knit communities; the better you understand the thoughts and feelings of your fellow townsfolk, the closer you feel to them.

Isn't that a bit scary? Are kithkin the Borg? No, thoughtweft doesn't create a hive-mind—it isn't full-on telepathy or mind-speech. It's more like the empathic bond between twin siblings, but with a touch of magic mixed in. It's an extremely accurate reading of the body language and mood of other kithkin, that enables them to listen deeply to one another's souls. Kithkin are still individuals, and can "hide" thoughts from others if they so choose. But their natural state is this interweaving that keeps kithkin communities proud and mutually supportive. 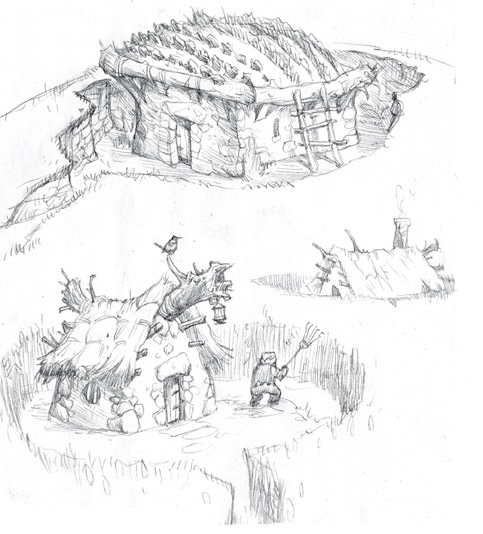 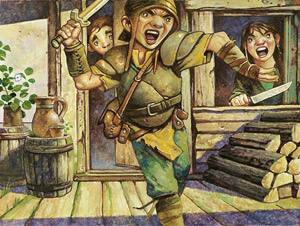 Kithkin clachans like Goldmeadow, larger ones like Burrenton and Cloverdell, or the largest of all, Kinsbaile, are led by cenns, which are like town mayors. Kithkin generally welcome travelers of other races to their clachans, but may the elementals help those who try to do harm to these thoughtweft-strengthened communities. It's said that if you pick a fight with one kithkin, you're choosing to fight them all. If you're a mischievous boggart looking to start some trouble in Goldmeadow, you're bound to have the entire clachan coming down on you—not just the knights and stalwarts of the militia, but the jackherds, the balloonists, the armorsmiths, the powder-mages, the archer hobbyists, the nursemaids, the skin-menders, the old lady who gathers firewood, and even the cenn of the whole place. The thoughtweft is, of course, involved here. Kithkin don't just think as a community—they fight as a community. As you'll see when the set releases, this is reflected in the kithkin mechanical identity—as a tribe they fight best in numbers, marching into combat together.

cenn (SEN)
noun
A kithkin town leader, similar in role to a mayor.

spring∙jack
noun
A domestic beast a bit like a cross between a shaggy sheep and a jackrabbit, which kithkin use for riding, milk, fur and mutton.

It's no surprise that Lorwyn features kithkin cards that are chock-full of thoughtweft flavor, and the related flavor of kithkin coming to the aid of other kithkin. In fact, there's a tribal mechanic in the set that, while actually showing up across all the tribes, feels most at home, Vorthos-wise, here among the kith. It's called "champion."

Ho-kay! Right. Note to self: Do not bother the leetle kithkins, for they get very, very angry. Let's look at this card part by part.

First of all, let's look at the plain old stats. It's an enormous 5/5 first striker, which is going to win almost every fight it gets into. It has vigilance, which means it's great at getting into said fights—it can wade in on the offense yet stay back and provide a near-impenetrable fence for your opponent to try to crash through. And it can block any number of creatures, which means it's even better at getting into the aforementioned fights. Hey boggart raiding party, are you trying to use your overwhelming numbers to break through my kithkiny defenses? Thoughtweft Trio wants to have a word with you. No really, Thoughtweft Trio wants to have a word with all of you, and that word is, "Five points of first strike damage, distributed in just the right way so that enough of you die so that you can't deal five damage back to us." (When they say it, it's hyphenated.)

Then there's the champion part. Champion is a mechanic that allows a powerful creature to "overlay" a creature of the specified subtype. In this case, you play Thoughtweft Trio, choose a Kithkin in play (preferably a meaningless 1/1 that was standing around doing nothing anyway) and remove it from the game, then begin smiling proudly at your beefy 5/5 thoughtweft-powered Kithkin Soldiers. The flavor of the mechanic is built into the way it's phrased on the card: "Champion a Kithkin." Champion here is meant in its verb sense: "To fight for, defend, or support." If that 1/1 Kithkin was feeling outclassed by all the Giants and legendary Elves and freaky slug-things on the board, Thoughtweft Trio comes to the rescue. They intercede on the part of that 1/1 and volunteer to take all the beatings that it would have suffered. 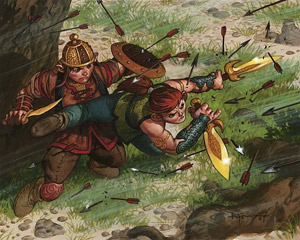 If the Trio do suffer some beatings—if the elves decide to declare them an eyeblight, say, or if the boggarts do a little launching of their unnecessary fodder in the direction of the Trio—then no worries. The Trio's job is complete, and the championed creature returns unscathed.

Note that, the way the champion mechanic is worded, Thoughtweft Trio doesn't necessarily have to affect a Kithkin creature. There might just be other permanents with the Kithkin subtype that the Trio could champion. In flavor terms, Thoughtweft Trio can champion ("fight for, defend, or support") an abstract idea (a Kithkin tribal enchantment, say) just as easily as it can a fellow Kithkin creature. Until the Trio fall in battle, that idea is held safely away from corrupting influences, forcing your enemies to deal with the Trio before they can deal with the enchantment. It's a neat idea, and goes well with the flavor of a protector intervening between the aggressor and whatever's being protected. Clachan, unite!

The champion keyword provides enormous creatures at undercosted mana prices, and puts a humanoid shield (see, that's like a human shield, but with a kithkin or flamekin or whatnot) in the way of your little guys. But there are other advantages, too, especially when you see the rest of the Lorwyn set. For example:

Besides all that, champion is just cool. The flavor of heroic champions coming to the aid of your worthy troops is an awesome feeling. And all the creatures with champion in the set have jaw-dropping stats—it's worth not even waiting until your 1/1s are in a compromising position. Just attack with your doughty little guys, and then after combat, trade them up into a tower of justice. Isn't that what playing the champion is all about?

Note that Wayne Reynolds's awesome art of Thoughtweft Trio actually shows the thoughtweft at work. The little glowing diamonds of magic over their foreheads and the halos of light around their faces are a symbolic visual cue for a kithkin sharing-of-minds via the thoughtweft.

If you think about it, thoughtweft is a perfect ability for soldiers acting in concert. These three are exactly in tune with one another, executing unrehearsed but flawless tactical positioning and movements. You might overpower one of them for a moment in a straight fight, forcing that one to yield ground, but the other two would feel the weak spot and move to fill the gap. Remember the clever velociraptors in Jurassic Park? One draws attention while the others move into flanking positions, almost by instinct. No seams, just one tightly woven fighting force. That's why, even in a world where giants roam, the kithkin can hold their own. 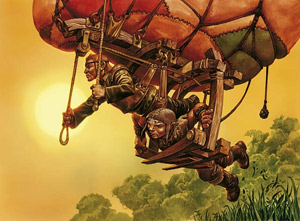 Kithkin are reverent and superstitious. They venerate the mysterious greater elementals of Lorwyn, beings that embody the abstract concepts and dreams (and sometimes, nightmares) of the plane. They feel that the movements and actions of the greater elementals represent omens for their own lives, and watch them with respectful distance.

This augury mingles with the kithkin propensity for superstition; they propagate hundreds of odd little folk practices to protect their good fortune. For example, a kithkin might wear a bit of silver on her knife hand when eating jackmutton, to prevent the rest of the herd from becoming nervous or irritable. Most of these superstitious practices fall somewhere between wise folk medicine and utter hogwash in terms of actual usefulness, but kithkin follow them faithfully. Look for more superstitions in the flavor text of Lorwyn cards.

Kithkin celebrate Lammastide, a holiday involving dancing and the tying of ceremonial ribbons. Dancing is an elaborate affair among kithkin, serving to heighten and solidify the bonds of thoughtweft. They also celebrate the Aurora, an annual show of flickering lights that plays across Lorwyn's sky, usually with a gathering of multiple clachans and droning cenn speeches.

And when a boggart mob shows up to spoil things for the festival-goers, there's almost always a Thoughtweft Trio ready to champion their cause.