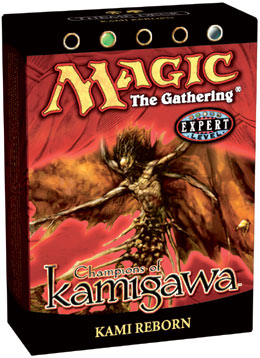 he spirits of Kamigawa practice their own form of magic, and the "Kami Reborn" deck puts it at your fingertips. Many of the creatures have "spiritcraft" abilities that do something whenever you play a Spirit or Arcane spell. For example, Soilshaper turns a land into a 3/3 creature until end of turn and Thief of Hope steals 1 life from your opponent. Of course, all but a handful of your spells are Spirits or Arcane.

Many Spirits in the "Kami Reborn" deck have the soulshift ability. When one of your creatures with soulshift goes to the graveyard, you can bring back a cheaper Spirit from your graveyard to your hand. To make the best use of this ability, the Spirits in the deck have a wide variety of mana costs.

While Iname, Death Aspect doesn't have soulshift itself, it interacts well with cards that do. When Iname comes into play, you can search your deck for Spirits of various costs and put them all into your graveyard. That way, whenever any of your Spirits with soulshift go to the graveyard from play, you'll have a varied selection of Spirits to bring back—preferably ones with soulshift!

Pay special attention to Hana Kami. It's one of the best Spirits to bring back with soulshift since you can sacrifice it to "regrow" Arcane spells that you've already played. So not only can you use your creatures again and again, but you can retrieve removal spells like Swallowing Plague and Pull Under from your graveyard multiple times. Quite a powerful interaction!

The other creatures to look out for are the Zubera—tiny Spirits that generate effects when they hit the graveyard from play. The best part is that the effects get more powerful if more Zubera have died that turn. For example, if Dripping-Tongue Zubera is destroyed, you put a 1/1 creature token into play, plus one more token for each other Zubera put into a graveyard that turn. Try to send them to the graveyard in bunches, perhaps by sacrificing them all to Devouring Greed. Such is the circle of life! 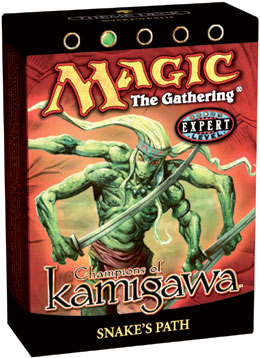 f your opponents weren't afraid of snakes before, the "Snake's Path" deck will give them a new phobia! With tons of sss-slithery creatures with sss-super abilities, you will sss-seize control in mere sss-seconds!

By themselves, the Snakes in the "Snake's Path" deck are pretty formidable; many of them can "stun" other creatures —that is, prevent them from untapping next turn—by dealing combat damage to them. Toss in other useful skills, such as tapping for mana, regeneration, and the ability to force creatures to block, and you've got a deck full of versatile reptiles. If you think that sounds good, just wait until you get their legendary leaders on the table.

Sachi, Daughter of Seshiro gives each of your Shamans the ability to tap for

and gives your other Snakes +0/+1. Sosuke, Son of Seshiro likes to play things a little more aggressively. It grants all of your Warriors the venomous ability to destroy any creatures they damage in combat and gives each other Snake you control +1/+0. Get this brother-and-sister team out together and take charge! Remember to hold on to cards like Serpent Skin to save Sachi or Sosuke from destruction. If you need some help finding one of the two siblings, try Time of Need, which lets you search for any legendary creature in your deck.

If you want to take the "Snake's Path" deck to the next level, you may want to look through your collection for other Snakes. The Champions of Kamigawa expansion has lots of juicy options, including the powerful Seshiro the Anointed. It gives all your other Snakes a +2/+2 bonus and lets you draw cards when your Snakes deal damage to a player. If you can acquire cards from older sets, definitely try to find a River Boa or two (or three or four) from the Visions™ set—its islandwalk and regeneration abilities can cause havoc! If you're more adventurous, you could consider adding a second color, such as blue. Blue gives you access to two more awesome snakes: Ophidian from the Weatherlight™ set (an amazing card-drawing creature) and Mystic Snake from the Apocalypse™ set (a counterspell and a creature all rolled into one). Anyway you build it, your Snake deck is bound to sss-stir up a sss-storm! 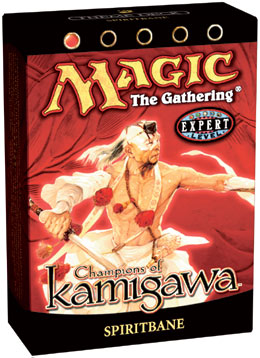 he yamabushi are mountain shamans skilled in the destructive magic needed to combat the spirit world, and the "Spiritbane" deck proves it. With nearly a third of its creatures and spells capable of dealing direct damage, this deck should have no trouble dispatching your opponents and their creatures.

The "Spiritbane" deck is focused around Kumano, Master Yamabushi. For

, this stocky 4/4 Shaman deals 1 damage to any creature or player. Since it doesn't tap for this ability, you can use it as many times per turn as you can afford! In addition, if Kumano or his pupils damage a creature and it would somehow end up going to a graveyard, it gets removed from the game instead—a skill that is particularly useful against those pesky Spirits that seem to keep coming back from the dead. Of course, the yamabushi's devotion to the ways of direct damage comes in handy against mortal foes as well.

Look for an opportunity to give the Kusari-Gama to either Kumano or a Frostwielder, which taps to deal 1 damage to a creature or player. The Equipment lets you pump its bearer's power, but that's not the exciting part. When the equipped creature damages an opponent's blocking creature, the Kusari-Gama does the same amount of damage to each other creature the opponent controls. Deal 1 damage to a blocker with Kumano? Bang! All your opponent's other creatures are dealt 1 damage by Kusari-Gama! Need to cause more destruction? Use Kumano's ability again. Soon your opponent won't have any creatures left to stand in the way of your oncoming horde.

A fun aspect of the "Spiritbane" deck is Brothers Yamazaki. These two twins make up the only legendary creature in existence that lets you keep two copies in play at once. One brother alone is no big deal:

for a 2/1 with bushido 1. But the fun begins when the second brother comes into play. They each become 4/3 creatures with bushido 1 and haste. An opponent who was probably planning on only one relatively puny attacker will be facing down 8 damage instead. Talk about brotherly love! 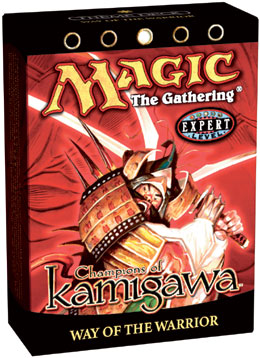 Way of the Warrior

he "Way of the Warrior" deck enlists a new brigade into your army: Samurai! These fearless warriors showcase the Champions of Kamigawa set's new combat ability: bushido. Whenever a creature with bushido 1 blocks or becomes blocked, it gets +1/+1 until end of turn. Some creatures have bushido 2, or even more. This evocative talent comes as standard for Samurai, and that makes them a force to be reckoned with. Since the bushido bonus is given on both offense and defense, your side should always have the upper hand in battle.

One of the coolest cards in the "Way of the Warrior" deck is Bushi Tenderfoot. It starts off as a puny 1/1 Soldier, but if it can defeat an enemy in battle and live to tell about it, Bushi Tenderfoot transforms into a formidable 3/4, double-striking, legendary Samurai with bushido 2. The feat may seem impossible, but there are a number of cards in the deck that can help. Equipping Bushi Tenderfoot with a No-Dachi, which gives +2/+0 and first strike, might work, but something trickier is clearly in order. If the creature it meets in combat also has 1 toughness, you can keep your Tenderfoot alive with Blessed Breath or Candles' Glow. If you need more brute force, Hold the Line gives each blocking creature +7/+7—a useful bonus in any fight. But perhaps the most exciting way is to wait for Bushi Tenderfoot to block or be blocked, and then play Indomitable Will. This surprising creature enchantment will not only get the job done but after your Tenderfoot flips it will be a 4/6! The little man certainly grows up right.

The real stars of the "Way of the Warrior" deck are its legendary Samurai. Nagao, Bound by Honor is a truly inspirational leader that isn't afraid to get his hands dirty. Whenever it attacks, each of your Samurai gets +1/+1, including Nagao! Even more impressive is Takeno, Samurai General. While Takeno is in play, your other Samurai get +1/+1 for each point of bushido they have. With both legendary leaders on the battlefield, your Samurai army should easily smash your opponent!

Trust the blade, and honor the code!