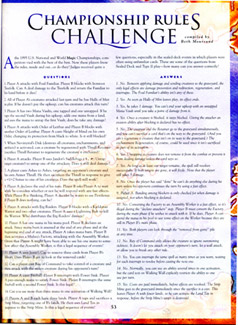 Warning!
This is a reprint of an article from 1995. This means that the rules have all changed since these answers were written, and at least one question would be answered in the opposite way if it were answered today! This is being presented solely as an entertainment, not as a guide to the current rules.

t the 1995 U.S. National and World Magic Championships. competitors vied with the best of the best. Now these players know the rules, inside and out...or do they? Judges received quite a few questions, especially in the sealed-deck events in which players were often using unfamiliar cards. These are some of the questions from Sealed Deck and Type II play—how many can you answer correctly?

1. Player A attacks with Foul Familiar. Player B blocks with Ironroot Treefolk. Can A deal damage to the Treefolk and return the Familiar to his hand before it dies?

3. Player A has two Mana Vaults, one tapped and one untapped. If he taps the second Vault during his upkeep, adds one mana from a land, and uses the mana to untap the first Vault, does he take any damage?

: Untap target creature) to untap one of the attackers. Does it still deal damage?

7. A player casts Ashes to Ashes, targeting an opponent's creature and his own Armor Thrull. He then sacrifices the Thrull in response to give a +1/+2 bonus to one of his creatures. Does the spell still work?

8. Player A declares the end of his turn. Player B asks Player A to wait while he considers whether or not he will respond with any fast effects. While Player B is thinking, Player A decides he wants to use Pestilence. If Player B does nothing, can he?

9. Player A attacks with Erg Raiders. Player B blocks with a Kjeldoran Warrior and two other creatures. Player A uses a Lightning Bolt to kill the Warrior. Who distributes the Erg Raiders' damage?

10. Player A has one mana in his mana pool. Player B declares an attack. Since mana burn is assessed at the end of any phase and at the beginning and end of any attack, Player A takes mana burn. Player B then activates a Mishra's Factory, attacking with the Assembly Worker. Given that Player A might have been able to use his one mana to somehow affect the Assembly Worker, is this a legal sequence of events?

11. Player A uses Jester's Cap to remove three cards from Player B's library. Does Player B get to look at the removed cards?

12. Can a player cast Ray of Command to take control of a creature and then attack with the stolen creature during his opponent's turn?

14. Can you use more than three mana in one activation of Walking Wall?

15. Players A and B each have three lands. Player A taps and sacrifices a Strip Mine, targeting one of B's lands. He then uses Land Tax in response to the Strip Mine. is this a legal sequence of events?