week hundreds of players are preparing for the 2006 United States National Championship, and thousands more are awaiting the results. U.S. Nationals is a storied tournament whose past champions have included some of the biggest names in Magic, from technical masters like Eugene “Eugenius” Harvey, Pro Tour Champions like Justin Gary, and the Magic Hall of Fame's shining star Jon Finkel. Those who have been approaching at least the Constructed portion of U.S. Nationals have quite a firmly established metagame to work with. This format is essentially the same format as the Regional Championships (pre-Coldsnap Standard with the Core Set and full Kamigawa and full Ravnica Blocks), which varied little from the decks coming out of Pro Tour--Honolulu, but for minor injections from the Azorius and Simic.

Even when formats seem to hold constant over extended periods of time, the introduction of sets – specifically Dissension, which has to this point had less direct impact in Standard but for the admittedly relevant Simic Sky Swallower – leaves room for innovation, given sufficient time. As such, and as with last year, those hundreds of American players preparing for their National Championship look to predecessor French Nationals for their cue, and to listen at the door to learn if there will be any drastic changes in the Standard metagame. This year, as with last year, the French forerunners stand to leave a mark on a pre-Coldsnap Standard not long for the tournament set.

Last year, French finalist Michel Remlinger was one of two players in his National Championship Top 8 to pioneer a new look at Mono-Blue Control. This version, which utilized main deck Jushi Apprentices as the primary draw and Spire Golem as the primary attack card (in lieu of the then-more conventional multi-tasking Thieving Magpie) was a highly innovative change.

Irrespective of which version was more efficient when dealing with the format as a whole, viz. Tooth and Nail and aggressive Red Decks, the main deck Jushi Apprentice version Remlinger played changed the way Blue decks dealt with one another. When faced with this kind of a Blue deck, another Blue deck with an initially more ponderous game plan might start off with his back against the wall, and ran the risk of losing outright on the second turn. You see, a Thieving Magpie costs four mana, so dealing with it via permission or even Vedalken Shackles was fairly simple; a Jushi Apprentice, though, would be nearly inexorable on the play given sufficient mana, and a fine bet even when the Jushi player were going second. If the Apprentice stuck, the opposing Blue player would find himself in a rough battle over Boomerangs and Echoing Truths that would almost certainly concede card advantage even if the Jushi Apprentice were dealt with in the short term.

Moreover, the switch from more nakedly powerful threat cards to the unassuming Spire Golem allowed Remlinger's version to play its threat early in beatdown matchups, or deploy any number of Azure Drakes – say, all of them – without tapping even a single mana in the midgame. Note that in a Blue-on Blue fight, the opponent might have to wait to pick a fight over Meloku or Keiga, but the far less powerful Spire Golem could come down leaving the Jushi Blue player eight remaining cards in hand and all his mana untapped, poised to win – or at least not lose, per se – the resulting permission war. Beyond putting Remlinger on the French National Team, the Jushi Apprentice version of Mono-Blue Control was highly influential. To wit, two weeks later at the U.S. National Championships, not only did Neil Reeves come packing a Jushi Blue version that seemed heavily influenced by Remlinger's deck, the Jushi Apprentices even infected the Blue Tron archetype!

Neil's deck was extremely similar to the Remlinger version, just built to maximize the unique elements that made it strong to begin with… But in its own way, Sonne's adoption of Jushi Apprentice for the sideboard of his deck was an even greater compliment to the success of these innovations. This might seem odd considering the fact that following its success at 2005 Champs, Jushi Blue versions were the most numerous at last year's World Championships… However the card was seldom played prior to French Nationals. By U.S. Nationals less than a month later, 2/3 of the subsequent National Team was packing this card, and half of them were main deck.

As ultimately successful as Jushi Apprentice in the Mono-Blue deck was last year, the rogue factor of the 2006 French National Championship Top 8 was far more surprising than a couple of Spire Golems. Consider:

4 Shining Shoal 1 Charge Across the Araba

1 Charge Across the Araba
49 Cards 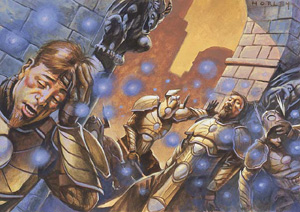 Guillaume Matignon's Heartbeat deck was a very interesting variation. Most Heartbeat of Spring decks we have seen since Pro Tour--Honolulu – certainly the dominant deck of the Charleston PTQ season – followed the 10 + 10 + 1 + 1 mana base and four color configuration that Max Bracht used to score Top 8 in Hawaii. Come U.S. Regionals, we saw a version of the deck that cut main deck Black, running just Invoke the Firemind as its kill spell, but preserving the Red sweep main deck that had become popular over the PTQ season. In the present case we see Matignon reversing the removal of the third color, choosing instead to run no Mountain (main) instead of no Swamp. Another variation shown by this deck is the change in number of basic Forest and basic Island, emphasizing early game Green mana despite the ostensible increase in Blue mana requirements due to main deck Gigadrowse.

It is important to note that Matignon did not actually cut out the Red… he just moved it to the sideboard. The typical Red cards – the most iconic of which is Savage Twister – are still present along with the singleton Mountain; they just don't start. An exciting new look at his take on the Heartbeat transformation is Simic Sky Swallower - is this a logical leap that was just slow to surface? The big bad of the hour just happens to be Blue and Green.

With six dedicated White decks in the Top 8 – one of which packs Lightning Helix and five of which play the card that makes Lightning Helix wilt – it may be safe, finally, to concur with Jeroen Remie at this point that Shining Shoal is the strongest card in Standard. Five decks in the French Nationals Top 8 ran it main, including the first place deck… and even the Ghost Husk version present moved Shining Shoal from its usual spot in the sideboard to a position of main deck hate.

The real story of this Top 8, which featured five different macro archetypes, is that it had only one repeat deck. That is not so remarkable, except that the single repeat deck made up fully half of the French Top 8, and was played by both Champion Sylvain Lauriol and National Team member Jonathan Rispal: White Weenie splashing Blue.

There seemed to be two distinct camps of WW/U decks in the Top 8. Unlike the other three decks in the Top 8, Champion Sylvain Lauriol's deck played neither Mana Leak nor Remand; Lauriol's Blue was focused on the activation fee on Azorius Guildmage almost exclusively. Instead of permission spells and card drawing, Sylvain peppered his deck with singleton copies of really unusual cards, including Nagao, Bound by Honor, Infantry Veteran, and Charge Across the Araba. It is too early to call which version, if either, will be the dominant iteration of this archetype for Standard, but you can bet there are a couple hundred American players trying to figure that question out right now.

The other version of WW/U, which was played in broad steps by three members of the Top 8 and one member of the National Team, ran a much more dedicated Blue element. All three decks played two copies of Grand Arbiter Augustin IV and a light permission suite. Besides IV, these decks all ran dedicated Azorius cards like Court Hussar and Sky Hussar in addition to Lauriol's splashed Guildmages. A very interesting sub-theme of these decks was the inclusion of Weathered Wayfarer. The seldom seen, if potent, one-drop could exploit Azorius Chancery to stay “behind” on lands against a control deck, and, once online, can fire for Quicksand, Ghost Quarter, or one of the innumerable Blue and White Kamigawa Block Legendary Lands, which themselves could play [better than] Ghost Quarter in the right matchups.

More even than just last year's violent injection of Jushi Apprentice into the U.S. National Team, this year's French Nationals Top 8 and its new deck may have an even greater impact on the pre-Coldsnap Standard metagame. It just so happens that White Weenie variants are the most successful decks in the history of U.S. Nationals. In 1999, eventual Pro Tour Champion Kyle Rose rode “White Lightning” Waylay past a metagame full of combo decks to take top honors; the previous year, Matt Linde earned thunderous applause by just having a key Abeyance when his finals opponent Mike Long threatened to win it all with hated combo deck Cadaverous Bloom… and this doesn't even take into account Steve McArthur's White Lightning, Elliot Fung's Rebels, last year's strong finish by Mike Patnik, or other White Weenie representatives over the years.

Will history repeat itself just before Coldsnap changes everything for many of the remaining National Championships? Check back here at magicthegathering.com starting tomorrow to find out!