The Changeling of the Guard

, Mistform Ultimus. You've had your day in the sun. Too many days, if you ask me. You've become overly tanned, lazy, and self-satisfied. Sure, you've still got your fans, but then, so does According to Jim. For years, you've been the go-to guy for shorthanded tribes, and this service to deckbuilderkind almost compensates for the fact that your very existence has transformed otherwise nice people into smug know-it-alls. I understand the temptation to say, "Gotcha!" when someone claims that [such-and-such] is the only [such-and-such] in Magic. My brain is full of useless trivia, too. For example, did you know that it takes 17 muscles to smile, but it takes 330 muscles to bring up Mistform Ultimus in an internet forum?

Your willingness to fill in where needed makes this almost forgivable, Mister Ultimus. But not quite. Unlike many, I am tickled that the Lorwyn changelings have knocked you off your pedant's pedestal. You've got company, my friend. The next time you find yourself camped out in one of your trademark footnotes, you'll be joined by a baker's dozen of translucent ETs. It'll be a tight squeeze down there now, but you'll get used to it. How do you like your comeuppance? Payback is unpleasant, isn't it?

Turnabout is fair play. Especially if you're playing Vintage or Legacy. Sure, you lost your "uniqueness," but you know what? It's really hard for me to feel sorry for you because you have done the same thing to others your whole life! Did anyone speak out when People of the Woods became a plural? Did anyone care when Walking Sponge or Rabid Wombat or Brushwagg lost the cachet of having uniquely silly creature types? Who is looking out for the Summoning Station, Nuisance Engine, and Diamond Kaleidoscope producers? You're like a walking copyright infringement, Mister Ultimus, and I will not shed a single tear for you.

The news isn't all bad, however. While you've lost your status as the only creature in Magic with every creature type, just look at what you've gained!

By the way, welcome to Pre-Changeling Week! Due to some unforeseen temporal anomalies (Hey, wasn't that last block?), I won't be around next Thursday for Changeling Week proper. Some turkey will be filling in for me. Until then, let's build some changeling decks and steal all of Rosewater's puns.

It has been said that the changelings are the glue that holds together the gears of Lorwyn block Limited. Your Turtleshell Changeling, for instance, can trigger your Lys Alana Huntmaster, attack with and pump your Cenn's Heir, be championed by your Nova Chaser, or be fetched with your Boggart Harbinger. I saw this phenomenon first hand, as I watched a friend of mine open a game with the less-than-synergistic Kithkin Greatheart and Merrow Reejerey (Boo!), but then he followed that up with an Avian Changeling (Yay!). Everyone was happy! We all sang Kumbaya. It was very touching. 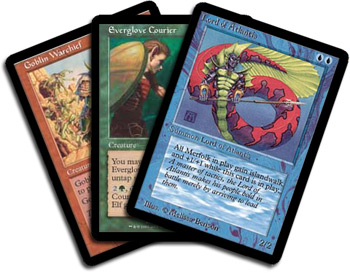 The changelings (at least the creatures) can perform a similar function in casual tribal decks. Since they have every creature type, they can be offered to any of the Betrayers of Kamigawa Patrons (Patron of the Kitsune, etc.); they can be cheapened by the Warchiefs from Scourge, Dragonspeaker Shaman, and Stinkdrinker Daredevil; they can be used to amplify your Aven Warhawk one turn and your Feral Throwback the next; they can be targeted by any of the Onslaught Couriers (Everglove Courier, etc.); they can be the untapped [creature type] that you tap for a card like Master Apothecary, Dwarven Bloodboiler, Patron Wizard, Seton, Krosan Protector, or Zombie Trailblazer; and they can get all the benefits from any of Magic's "lords" (Elvish Champion, Field Marshal, etc.).

The best part is that you can do many of these things in the same deck. How would you like to attack with an army of enormous indestructible creatures with double strike and, uh, banding? That's just what you can do with Mirror Entity, Timber Protector, an equipped Raksha Golden Cub, and Soraya the Falconer. Changelings aren't too fussy about who bosses them around, whether it's a walking tree (Verdeloth the Ancient), a Sliver (Gemhide Sliver), a Samurai (Nagao, Bound by Honor), a Snake (Seshiro the Anointed), some dude who collects nuts for a living (um, Nut Collector), or a freakin' Wall (Wall of Mulch). The green and white changelings are decent and abundant, but you can also use Runed Stalactite to ensure that your "lords" always have something to do.

Don't like the white "lords"? Here's another deck along the same lines, but swapping the white for red. Since green and red have the two most powerful changelings (changeling Berserker and Changeling Titan), I thought I'd use some "lords" that can help them break through (or just attack for infinite). The aforementioned duo are large but lack trample. We can remedy that with Kavu Monarch, Kodama of the South Tree (changelingcraft?), and Sunrise Sovereign. The other "lords" offer a numerically various array of pump effects, from +1/+0 to +1/+1 to +2/+2 to +3/+0. Perhaps the most dangerous changeling-enhancer is world-fameless samurai master, Iizuka the Ruthless. I'm not sure why he's so ruthless, but it probably has something to do with people spelling his name wrong all the time. Two consecutive i's? Really?

Greatest (Goblin) of all Time

There has been some controversy lately about the fact that there are no Goats in Lorwyn. No true Goats. No pure-blooded, dyed-in-the-wool Goats. I've known about this since I read a thread in the Future Set Speculation forum entitled "No Goats in Peanut Butter." True fact and words to live by.

The reason for the controversy is that Goatnapper has nothing to 'nap. He's all dressed up with no place to goatnap. Sure, he can kidnap changelings, but it's just not the same. With no Goats, you get some initial head-scratching, followed by a realization: "Oh, right. Changelings." With one goat, you get some initial head-scratching ("Is that it?"), followed by the same realization. Plus, you've also got this poor Goat running around with a huge bullseye on it. That sounds like a win-win to me. On top of all that, having a genuine Goat would make it easier on the dimwitted Goblins. Imagine this conversation in the Goblins' secret hideout:

Real Goat or not, it doesn't really matter if all you want to do is build a cool deck. Russell C. sent me a nifty deck using "the soon-to-be most feared Goblin of Lorwyn." He wanted to put Blades of Velis Vel or Wings of Velis Vel on an Isochron Scepter and turn his opponent's creatures into Goats that way. He also used Amoeboid Changeling to do the same thing. You could sacrifice your 'napped creatures to Greater Gargadon before you had to give them back, and Russell included a number of ways to make more Goatnappers, including Soul Foundry, Followed Footsteps, and Kiki-Jiki, Mirror Breaker. I'm going to branch out into white, so I'll be using the imprintable Momentary Blink in this role. Another reader, Kevin, suggested, "Goatnapper plus Blades of Velis Vel or Wings of Velis Vel, and add in Tarpitcher, Siege-Gang Commander [Commander] or Brion Stoutarm for a real kick in the head."

Since we're going to be changing the creature types of our opponent's guys, we might as well use another fun reader combo. Ricky R. wrote in to tell me about the one-sided Wrath of God offered by Spirit Mirror and Shields of Velis Vel. It's reminiscent of the old Spirit Mirror + Unnatural Selection combo or the Spirit Mirror + Imagecrafter combo employed by Kelly Digges's archenemy (I assume). Since I want to use Isochron Scepter and the Shields of Velis Vel and Wings of Velis Vel anyway, I thought I'd throw in some Spirit Mirrors for kicks. There are a couple other one-sided Wrath of God combos involving Shields of Velis Vel. Goblin Pyromancer or Tivadar's Crusade will do the trick if your opponent is playing Goblins (and he or she most assuredly will be). Tivadar of Thorn himself is not bad with Amoeboid Changeling and doesn't mind a Momentary Blink.

I really liked the idea of using Brion Stoutarm to fling the goatnapped, so I worked in a bit of a Giant subtheme. Cloudgoat Ranger is great with Momentary Blink. Sunrise Sovereign pumps up the Ranger, Brion, as well as Amoeboid Changeling. With these cards, you can actually use Shields of Velis Vel in an offensive manner. If you use your Shields, the Sovereign (or Goblin Pyromancer or both) will turn your puny Kithkin Soldiers into elephant-sized monsters. Then give your opponents a beating they will never forget.

I was going to use Brutal Suppression, Rebel-hoser extraordinaire, but figured that it would make Amoeboid Changeling unusable and wouldn't be very effective anyway. The other card that could fit is Efreet-and-Djinn-hoser Suleiman's Legacy.

Changeling? Fans of Lorwyn Limited will know about some of the neat interactions in the next deck. Cards like Kithkin Greatheart and Boggart-Sprite Chaser are decent or mediocre in their native state, but excellent if you control a Giant or a Faerie, respectively. Of course, you can use a card like Avian Changeling to pump up either or both of them. The cool thing is that it doesn't have to be another creature. You can equip either of these fellows with a Runed Stalactite and make them satisfy their own conditions. Blades of Velis Vel can do the same thing.

This seemed like the basis for a fun deck, so I went looking through spoilers to find other cards that would fit. I found a few good ones. Cloudreach Cavalry is a measly 1/1 for two mana, but becomes an incredibly efficient 3/3 flyer as long as you control a Bird. Skirk Outrider is similarly awful unless you control a Beast. Last of all, there's the king of all "As long as you control a"'s: Tribal Golem. At six mana, it can be tough to play in this deck, but that's why it's just a one-of. If you went black, you could do similar things with Bladewing's Thrall or many of the Demons and Ogres from Kamigawa. That seems a bit less fun to me, since you're mostly just negating a drawback rather than making huge (and cheap) beaters out of otherwise unplayable cards.

I cooked this up on Magic Online in about thirty seconds and barely made any changes to it in the course of my testing (I basically just added the mini Equipment toolbox). It's fun, kind of weird, and surprisingly powerful for a deck with three Skirk Outriders in it.

Until next time, don't ever changeling.