A Closer Look at Kithkin

As usual, the White boxes indicate an appearance in the Top 8 whereas that lonely Blue box tells us that Kithkin was triumphant in Springfield... So what about Kithkin?

As it's been quite a while since we've taken a close look at Kithkin White Weenie, or Mirror Master, I thought we would break down this contender.

First of all, Kithkin plays more lands than we have seen in White Weenie-style decks, at least since the time of first turn Ramosian Sergeants, when one of the main goals in the format was having more mana than the opponent so that you could strive to out-Lin Sivvi him. Despite its generally low curve, Kithkin plays a whopping twenty-six lands! How positively Draw-Go of it. How can Kithkin get away with such a high mana count and still maintain a forcible offense?

While fourteen of the scripted twenty-six lands are basic Plains, the other twelve are all highly functional.

This land has risen to nigh automatic four-of levels in many decks, from beatdown decks like Kithkin to control decks like Faeries, all the way to certain combo decks like Reveillark in Standard. It almost seems like the only decks that do not play Mutavault are those concerned with producing quintuple-colored five-drops such as Deus of Calamity or Oversoul of Dusk.

This land is generally local to Kithkin (though it has been played with Rith's Charm in Extended by at least one reckless deck designer). Windbrisk Heights has two important elements going for it that make it a powerful tool in Kithkin specifically: First, Windbrisk Heights is essentially a "free Impulse" ... While it is functional as a land, it digs four deep and waits vigilantly to be activated during combat; in that sense, it kind of stands in as a spell (at least eventually) when you draw it. Secondly, Windbrisk Heights trigges on an attack by three creatures... The stock Kithkin decks are expertly set up to fulfill specifically this land's triggering condition. Both the Kithkin signature non-Kithkin stamped card, Spectral Procession, and non-Kithkin late game attacker Cloudgoat Ranger produce three potential attackers when online. Therefore, even when under the pressure of a Firespout deck, Kithkin can go from zero to Windbrisk Heights position with a single spell.

Finally we have Rustic Clachan, a land specially engineered for Kithkin use. This land comes into play untapped in Kithkin (or deck designers generally presume it will) due to the large concentration of Kithkin in the Mirror Master deck. Rustic Clachan is a fine set of lands 23-26 because while it can play Plains, it is also a potentially useful combat trick or even game-winner (in that it acts like a sort of permanent Giant Growth).

Kithkin can deploy and attack like any curve-based White Weenie deck, leading with potent one-drops and bolstering the littler bodies with the likes of Wizened Cenn and Thistledown Liege. The "unfair" aspect of the deck is getting in a halfway decent attack and then pointing Mirrorweave at one of these two creatures (or perhaps the opponent's Diety of Scars) in order to deal a grievous -- hopefully lethal -- amount of damage in a single attack. Consider an attack by three tokens produced by Spectral Procession; these Spirits have flying, so they might not get blocked. After blockers are declared (or in this case not declared), the Kithkin player can cast Mirrorweave to dramatically increase the damage from 3 to... hopefully more than the opponent's life total. A Thistledown Liege, for instance, as the deck's only other creature will produce 21 unblocked damage (Thistledown Liege and three Spirit tokens; each token becomes a Thistledown Liege; Thistledown Lieges are both Blue and White; each unblocked Spirit / Thistledown Liege will receive a boost of +2/+2... three times; 7 times 3 is 21).

The newest key addition to this strategy seems to be Figure of Destiny from Eventide. We approached Figure of Destiny in the preview article largely as a tool for Red Decks, but whatever color the border, this creatures is a White Kithkin.

So what about Figure of Destiny?

It is a one-drop and a pseudo two-drop... But it doesn't have to be. This creature can be almost like a Goblin Patrol... except you get to pick when you pay the "echo" (or even if you pay the echo) , and sometimes, if you want to pay even more echo, your Goblin Patrol gets bigger and meaner. If the Kithkin deck is stuck with a lot of its 26 lands, a little flooded, Figure of Destiny seems like a superb place to send excess mana.

But even without the bells and whistles, Figure of Destiny is a white Kithkin (as we've noted), meaning that it plays well with Rustic Clachan, Wizened Cenn, Thistledown Liege, and so on. Even without its impressive abilities, this card is highly synergistic with the rest of the deck.

In order to include Figure of Destiny, a cut was made... and it was Goldmeadow Harrier. It is not at all clear that this was the right cut (despite Vick's win), which left two plus two copies of fellow 1/1 Burrenton Forge-Tender, Goldmeadow Harrier being a key weapon in the Kithkin battle against large and efficient creatures.

Despite a Kithkin win in Missouri, Faeries remained the most populous Top 8 deck, with three-and-a-half present. And a half?

The newest step in the Faeries arms race seems to be... hybridizing with Elves? 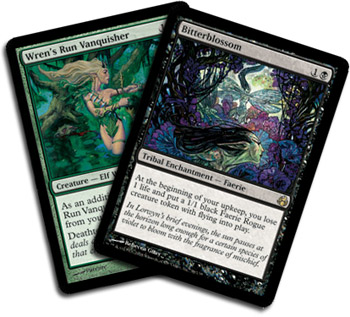 This deck has numerous exciting second turn plays, including Leaf Gilder (which can ramp to Chameleon Colossus or Sower of Tempation on the third turn), Wren's Run Vanquisher (the classic second turn Elves play), or the best of them all, Bitterblossom.

Feldman's deck is exceptionally disruptive, even for a format largely dominated by blue. Though he has cut many of the core Faeries cards, Richard maintained the popular eight-pack of permission spells (Broken Ambitions and Cryptic Command) as well as playing the maximum number of Thoughtseizes (many players having exchanged Broken Ambitions for Thoughtseize).

At the high end, this deck ramps to Oona, Queen of the Fae, one of the most dangerous threats available in the format. Players who untap with Oona in play rarely succumb; Oona is a perfect answer to a Bitterblossom-based offense, and it is notoriously difficult to kill (too big for Nameless Inversion, black so Shriekmaw doesn't do the trick, and so on).

Like many decks in the post-Shadowmoor era, this one relies on the combination of Vivid Grove and Reflecting Pool to produce the appropriate colors of mana (that is, all of them). Turn one Thoughtseize, turn two Leaf Gilder, turn three Cryptic Command? No problem!

The latest in the line of Mono-Red decks (you know, the decks justifying those main-deck Burrenton Forge-Tenders) is Matt Rader's.

Rader's mana base is really troubling me. I don't know why he has Auntie's Hovel, Graven Cairns, and Reflecting Pool... especially in a list with only 20 lands. All of his cards can be played with good old basic Mountains, and the presence of Graven Cairns and Reflecting Pool, in particular, make it more difficult to play Figure of Destiny or Tarfire on that critical first turn. Pro Tour Champion Scott Johns and yours truly went over this decklist repeatedly looking for any possible explanation for all these lands. Maybe those lands baffle his opponents (in the tradition of Eric Tam), threaten some black card out of his sideboard that may lead to some gain for Rader if opponents react to a threat he's not actually bringing in, or, just maybe, we're over thinking this and it's just outright bad. Lastly, maybe there's some other mundane explanation like "he changed his deck or sideboard at the last minute and didn't have time to switch his lands"? Ok genius in the forums, this is your chance to show us what we're missing.

Wild Ricochet is a powerful sideboard card that you might not be familiar with yet. It is powerful in both the mirror (12 point life swing when dealing with a Flame Javelin) and Primal Command. Especially when the opponent does not elect to search up a creature, Wild Ricochet can be an absolute nightmare.

Don't forget that this upcoming weekend is the US National Championships! Tune in to magicthegathering.com starting tomorrow to cheer for your favorite players. I know that I will be glued to the computer screen all weekend!