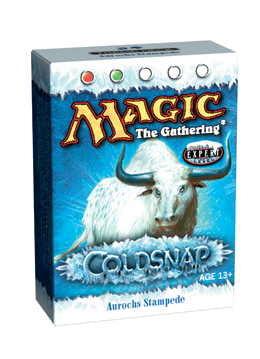 he Ice Age card Aurochs is a creature with trample that, when it attacks, gets a bonus for each other attacking Aurochs. At the time, there was only one question: What other Aurochs? The “Aurochs Stampede” deck finally answers that question, as three new Aurochs show up to really get the herd rumbling.

Over the first few turns of the game, play cheap creatures like Tinder Wall and Orcish Lumberjack. Besides helping you out in combat, they can accelerate your mana. They do so for a price, however, so be sure it’s worth sacrificing a permanent to get a temporary mana boost. Then, starting with the two-mana Bull Aurochs, you’ll start calling your cantankerous cattle.

Keep the first few Aurochs you assemble as safe as possible while building up your herd. In fact, Aurochs Herd is the card that can help you out the most, since it will find more Aurochs in your deck. If you use the Herd’s ability to fetch another Herd, or you start bringing them into the fold with Hibernation’s End, you can keep playing Aurochs until the cows come home!

Once you’ve got enough Aurochs, the deck goes on the offensive in a hurry. Attacking with five Aurochs at once means each one gets +4/+0, and since they all have trample, that adds up to a lot of unstoppable damage. For those times when “a lot” isn’t enough, Balduvian Rage, Resize, and Bounty of the Hunt can really put the “stamp” in “stampede.” To make sure even more damage gets through, send an Aurochs to the skies with Whalebone Glider while it’s still small, then start your attack.

The deck’s primary enemies are flying creatures, which Frostweb Spider and Whalebone Glider should help deal with, and creatures with first strike, since they can block and kill an Aurochs in combat before it can deal its trample damage. Save your Incinerates for such targets.

After you have a few games under your belt, you might want to make some adjustments to the deck. You can’t go wrong by adding more Aurochs or Incinerates. You might find even more compelling cards in the Guildpact set. The red-green cards of the Gruul guild include cards with bloodthirst, like Scab-Clan Mauler, that will appreciate the Aurochs’ trample damage, and cards that just flat-out like to attack, like Burning-Tree Shaman. 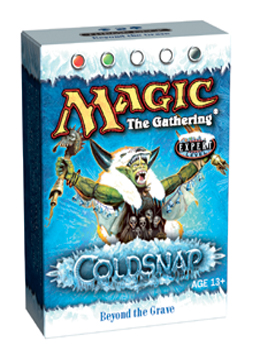 o a necromancer, death is the most delicious part of life—and when playing the “Beyond the Grave” deck, you’re the necromancer. Don’t hesitate to send your minions to their doom, because each death increases your dark powers. The more corpses you produce, the more zombie fodder you’ll have, and the more spells you’ll return from your graveyard to your hand.

Early in the game, play defensively. Block and trade your creatures for your opponent’s creatures. Don’t worry, cadavers come in handy later! This deck needs a lot of mana, so just keep your opponent’s strategy in check while playing lands turn after turn. Later in the game, the tide will turn in your favor.

As the game progresses, don’t stop letting your creatures fall in combat—in fact, that’s the key to your success. It’s especially good for you when certain creatures, like Insidious Bookworms, die. To make things even better, whenever one of your creatures is marked for death due to a spell or combat damage, sacrifice it to Skull Catapult, Orcish Bloodpainter, or Gutless Ghoul instead. If Sek’Kuar is overseeing things, you’ll get a bonus 3/1 Graveborn creature token no matter how the creature dies. When the creature hits the graveyard, you can return any cards with recover in your graveyard to your hand. If you return Grim Harvest to your hand, you can use it to get back the creature that just died, then pop it right back into play! If that’s not an option, you can recycle the corpse with Balduvian Dead to create a Graveborn token that, itself, dies at the end of the turn . . . setting off the cycle all over again!

This deck can be complex to play, since there are so many triggers and options. You have to be extra careful when there are recover cards in your graveyard: If one of your creatures dies when you don’t have the mana to pay the recover cost, you lose the recover card forever. The deck also has no way to block flying creatures, so they’re particularly dangerous threats.

Once you’ve played a bit with this deck, you might want to modify it to your tastes. An interesting angle is to include some Golgari cards from the Ravnica: City of Guilds set. Many cards from that guild, such as Golgari Germination and Savra, Queen of the Golgari, make it even more beneficial to you to bump off your own creatures. It’s a match made in—well, you don’t want to know! 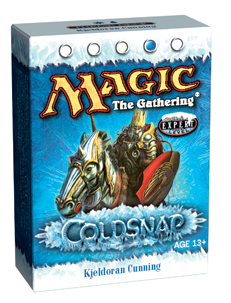 he noble Kjeldoran Soldiers have teamed up with the crafty Zuran Wizards to build an army that can outfight and outthink any foes. With the “Kjeldoran Cunning” deck, you’re the general of that army. You’ll need all your wits about you to win the fight.

In the first few turns of the game, get some Soldiers onto the table. If you see an opportunity to attack, don’t hesitate to do so, but be prepared to stay on defense if necessary. Meanwhile, use any extra mana to play deck manipulation spells to improve both the cards in your hand and the cards you’ll be drawing soon.

Before too long you’ll have an array of Soldiers on the battlefield, hopefully led by Field Marshal. Sometimes that’s enough to win the game, as you can simply overwhelm an inferior defense. In the games when that’s not possible, you’ve got another strategy. Your opponent won’t be able to fight through your ground troops to damage you, so you’re safe until you find a breakthrough threat like Kjeldoran Gargoyle, Jötun Owl Keeper, or Wings of Aesthir.

So where’s the cunning? All around you! Brainstorm and Reinforcements let you manipulate the top of your library so that when you play a spell with ripple, you know there’s another copy of that card waiting to be played for free. Both of those cards are also excellent with Portent. Darien, King of Kjeldor and Zuran Spellcaster are a nifty duo: Have the Spellcaster deal damage to you, and you get a fresh new Soldier for your trouble! Kjeldoran Elite Guard and Kjeldoran Pride let you dominate combat, since having either one in play makes it nearly impossible for your opponent to attack or block your creatures safely.

If you see that your opponent’s methods of gaining extra cards, such as recover, will be better than yours over the course of a drawn-out game, it’s time for your army go on the offensive and end the game as quickly as possible! Gigantic creatures are also tough to deal with. Keep them at bay as long as you can while you attack in the air.

After getting a feel for the deck, you might want to customize it. Extra Field Marshals are sure to help your army. If you can grapple the complex ability of banding, more of the Ice Age Kjeldorans—Kjeldoran Knight, Kjeldoran Phalanx, and Kjeldoran Skycaptain—would be right at home with their new compatriots. 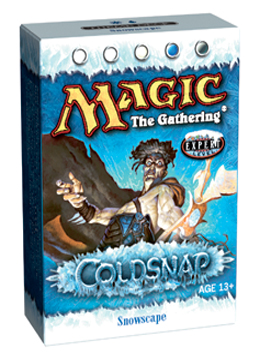 rab your mittens and a shovel, because it's hip-deep in snow in here! With the "Snowscape" deck, you'll harness the powerful magic of the ice to freeze your opponents out. The deck is filled with snow permanents and cards that get more powerful with snow permanents around. Get a few of them working together, and the cold won't be the only reason your opponent will be shivering.

Early in the game, defense is key, and Rimebound Dead is a fantastic defensive creature. You can spend any color of mana produced by any one of your lands to regenerate it. It won't be too long before your other creatures join the fray, but most of them will be there to hold off any enemy incursions. They'll man the snow fort while your unblockable creatures begin the assault.

Your best offensive creatures have some sort of evasion ability. Frost Raptor, Blizzard Specter, and Storm Elemental are all flying creatures with extra abilities that'll keep your opponent reeling. Rimefeather Owl will be flat-out immense: Its power and toughness are each equal to the number of snow permanents in play, and every single one of your lands is snow. Of course, you don't want to forget your other snow permanents, your opponent's snow permanents, and permanents you turn snow with Rimefeather Owl or Arcum's Weathervane. That's not all the Weathervane is good for either. Turn just one of your opponent's lands snow and Zombie Musher's snow landwalk ability makes it unblockable for the rest of the game.

Snow permanents do more than regenerate your Zombies, make your Raptors untargetable, and pump up your Owl. They also enable the abilities of your Rimewind creatures. As long as you have four lands in play, Heidar, Rimewind Master will be able to get rid of your opponent's best permanent turn after turn. Rimewind Taskmage isn't as powerful, but it's more versatile: Among other uses, it can neutralize your opponent's best attacker, untap Balduvian Frostwaker so it can turn your lands into flying creatures twice as fast, or untap Heidar to speed up the devastation.

After trying your hand at the deck, you might want to add more punch to it. The Ice Age card Withering Wisps is a potent addition that can devastate an opposing army. Coldsnap cards worth a look include the snow lands Mouth of Ronom and Scrying Sheets—the former destroys creatures, and the latter puts extra snow cards into your hand.