Colossus of the Sardian Range

residents of the continent of Terisiare, as it recovers from the repeated apocalypses of Dominaria's recent history, may still whisper of a mountainous land known as Sardia. Even we know precious little about this ancient region. It's believed that the Karplusan Forest were known as the Mountains of Sardia in the time of the Brothers' War, and that they bore rich ore deposits.

And of course, there are still tales of the Colossus that once awoke there.

Based on the rhyming flavor text of the Antiquities printing of Colossus of Sardia, we know that Sardian mountains were its birthplace. 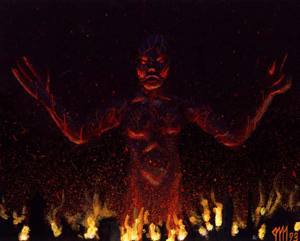 The art of the original card doesn't reveal much about the mountains or about the Colossus itself, but it does have a sense of primitive dread about it. We think that the Colossus was not revered, or awakened by people for any reason—rather, it's the stuff of nightmares, a towering menace that left disaster in its wake, something that mages would work hard to keep safely asleep.

From the Sardian mountains wakes ancient doom:
Warrior born from a rocky womb.

In other words, an awfully fun monster to summon to fight for you during a game of Magic.

Here you can see the Fifth Edition illustration of Colossus of Sardia, which emphasizes the scale of the Colossus by using elements of scale and a subordinated viewpoint (techniques you can read about in Matt Cavotta's article on the art of enormous creatures).

When it came time to create a new illustration for the Colossus for Tenth, the creative team tried to recapture some of that ancient menace indicated by the flavor of the card. They asked artist Greg Staples to create a creature sort of like a calamitous version of Rio de Janeiro's "Christ the Redeemer" statue. Rather than a welcoming sense of benevolence, the Colossus would radiate terror and bring catastrophe—a grim wonder of the world.

As you can see, Staples created an excellent sense of enormity (the thing is 9/9, after all) and awe to the piece—again by juxtaposing it with other elements for scale and by using a low "camera angle." And by keeping its face hidden in shadow, Staples depersonalizes it, allowing no friendly connection with the monster. Truly, the Mountains of Sardia have awakened a fearsome creature of ancient doom.