Posted in Competitive Gaming on October 4, 2018

(Editor's Note: Some information in this article has changed. Pro Tours are now Mythic Championships and there is no event in Dallas/Fort Worth. Additionally, Mythic Championships will not have regionally-defined invites. However, the main idea of the article is still relevant, as is most of the path to qualification information. We will be updating all of this soon. - Feb. 1, 2019)

The Grand Prix schedule for 2019 is finally here, and with it comes an update to how you qualify for the Pro Tour in 2019. Let's get right into what you need to know.

Let's start with the event that hits every level of play—MagicFest.

The Magic community has made Grand Prix weekends about so much more than just the main event, and we would be remiss if we didn't acknowledge and celebrate that. The community has made them about fun Magic gaming in all its forms: side events, artist booths, cosplay, panels, spellslinging, and, yes, qualifying for Pro Tours.

To recognize the full scope of the event, we're calling the whole experience MagicFest. What you've come to expect at a Grand Prix over the past several years isn't changing much. There will still be a main event—and we're still calling that event the Grand Prix—and side events and prizes and, and, and, and. It means that the emphasis will be on coming to enjoy all of the events—including the Grand Prix—held over the course of three to four days. It's a place for all levels of play. It's a Magic event and experience coming to your hometown.

The most visible change is that MagicFests will now also be home to Pro Tours. So that means that Pro Tour Cleveland will be hosted at MagicFest Cleveland. It means that if you bomb out of the first day at the Pro Tour, there's a whole, well, festival of Magic for you to take part in with the rest of the weekend. And it means that if you hang around one of these MagicFests till Sunday, you can watch the latest Pro Tour Champion receive their trophy—then head back to that Commander game you and your friends wanted to get to.

CFB Events has the full schedule of MagicFest Events on their website plus an update to Grand Prix invite and payout structures. Head that way to find a MagicFest coming to your neighborhood in 2019.

And if you want to discuss MagicFest on social media, we recommend using #MagicFest for the events as a whole or #MTGCityName for individual events.

Qualifying for the Pro Tour

The first two Pro Tours of 2019—Cleveland and London—are operating under the current qualification system. Nothing is changing there, as those qualification seasons are already underway. Starting with qualifiers for the Pro Tour in Dallas-Fort Worth (which will start near the end of March), things are going to look a little bit different. 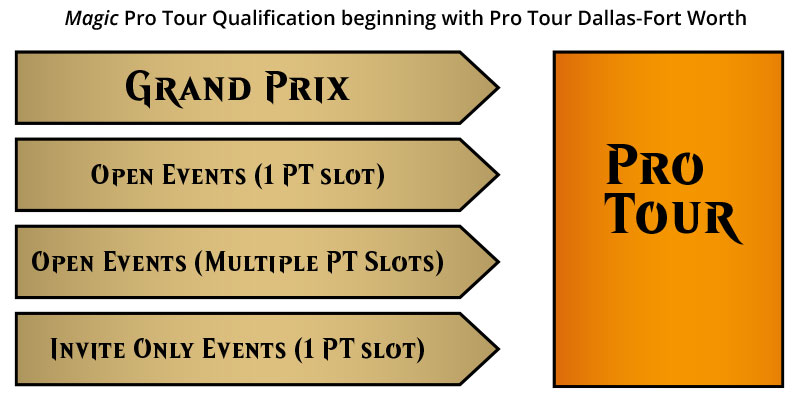 There will be three primary methods of qualifying for Pro Tours:

Magic Online will continue to run qualifying events much the same as it has in the past.

Finally, note that while qualified players could previously only play in one Regional PTQ, under the new system, players can play in any number of tournaments for which they are qualified until they qualify for the Pro Tour.

A Year of Change

When we announced 2019 would feature six Pro Tours, we were signaling that next year is going to be a year of change. We are rethinking and reworking our entire competitive gaming system—from qualifying events all the way up through Grand Prix and the highest levels of pro play. 2019 is going to be a transition year toward something better, as we build up to a competitive gaming structure that will look very different come 2020.

Competitive Magic gaming has a bright future, and 2019 is our launching pad. We'll see you there.

Posted in Competitive Gaming on October 4, 2018