Last weekend marked the debut of divisional play within the Magic Pro League (MPL), streamed on Twitch. From May 11 to June 8, MPL members play Traditional Standard, and top performers in each division will earn a guaranteed slot in Day Two of Mythic Championship III. Due to these stakes, MPL members were incentivized to bring their best decks.

Players may choose new decks every week. In this first week of league play, the recently released War of the Spark set had a huge impact on the metagame—but not in the way I had expected. With Tamiyo, Collector of Tales and Blast Zone being enormous upgrades to Simic Nexus, I had expected many MPL members to embrace that archetype. It was the most-popular deck at the StarCityGames.com Open in Richmond for a reason.

But no one wanted to play the deck that had a target on its back. Instead, they were all one step ahead, with decks or cards that matched up well against Simic Nexus. The most-played War of the Spark cards in the submitted decklists were Teferi, Time Raveler and Dovin's Veto, which are both excellent at stopping Wilderness Reclamation–fueled Nexus of Fates or Root Snares.

The white-blue upgrades mainly found their way in Azorius Aggro, Esper Control, and Esper Midrange. The Esper Midrange deck, sometimes called Esper Hero because it's built around Hero of Precinct One, wasn't popular before War of the Spark. But its popularity swelled, partly because its namesake card can exploit the gold nature of Teferi and Dovin's Veto. 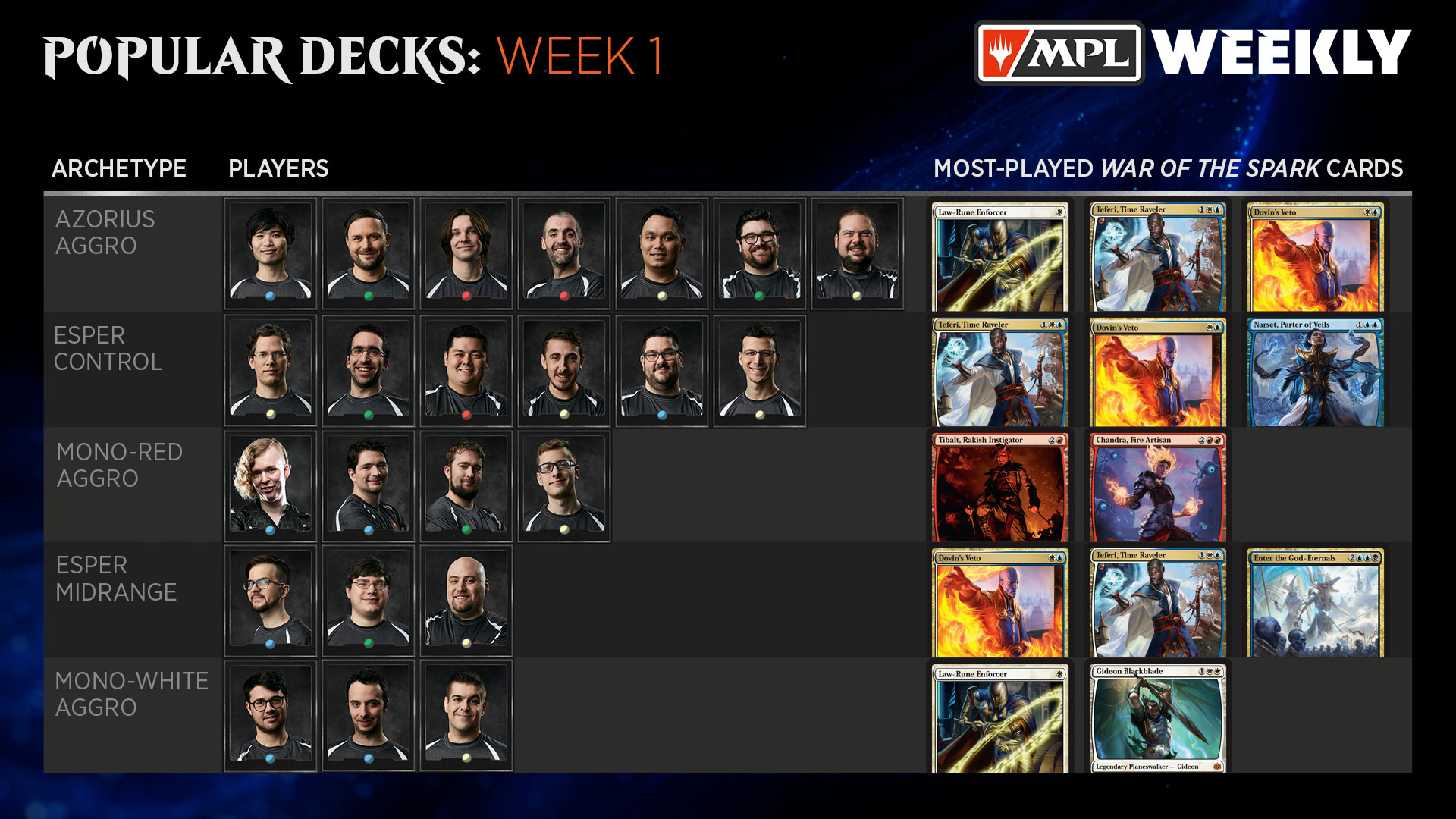 White Aggro was most popular in Week 1 overall, with ten players bringing Dauntless Bodyguard, Legion's Landing, and Benalish Marshal. These decks are capable of blazingly fast starts and could have run over Simic Nexus if any had shown up. Moreover, some of the deck's weaknesses were shored up by War of the Spark additions.

Law-Rune Enforcer found its way into all White Aggro decks, often as a four-of. It can tap down large blockers like Wildgrowth Walker, improving the matchup against Sultai Midrange. Also, it has 2 toughness, which means that it can survive Goblin Chainwhirler. Law-Rune Enforcer generally took slots previously occupied by Snubhorn Sentry, Hunted Witness, and/or Tithe Taker.

Gideon Blackblade is a sticky threat that dodges Kaya's Wrath, which is huge against Esper Control and other decks that rely on board sweepers. As a result, Gideon Blackblade was often a two-of in the main deck or a two-of in the sideboard, usually in slots previously occupied by Unbreakable Formation. William Jensen won both of his matches with two copies in his main deck. 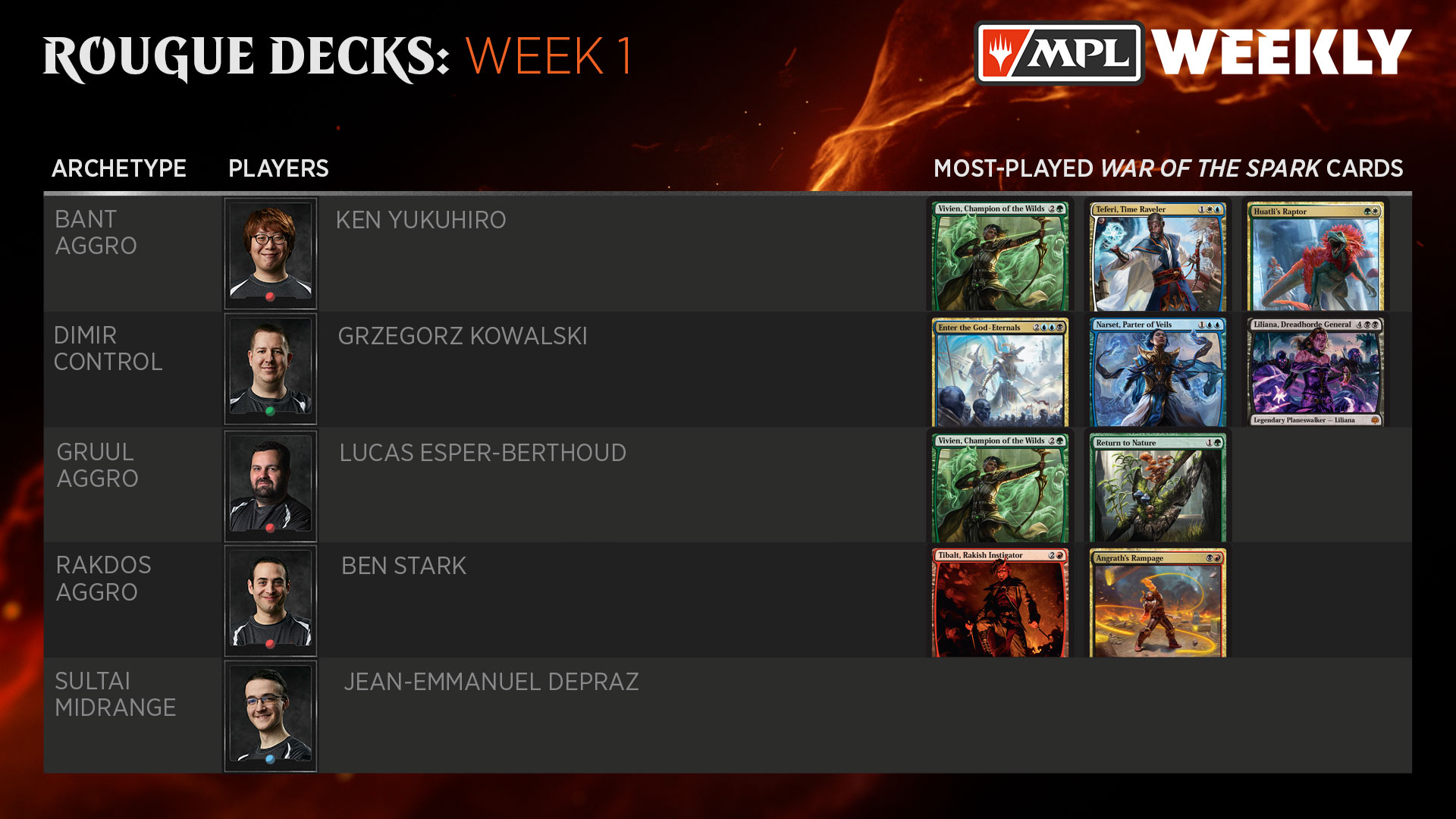 The two most interesting brews were registered by Ken Yukuhiro and Grzegorz Kowalski.

Yukuhiro, who has made Mythic Championship Top 8s with such unusual cards as Angel of Glory's Rise, Bone Picker, and Hollow One, never disappoints when it comes to bringing something spicy. His take on Bant Aggro—it's certainly not your usual Bant Midrange deck—features eight one-drops in Llanowar Elves and Pelt Collector and then branches into a proliferate theme fueled by four copies of Huatli's Raptor.

Huatli's Raptor can produce a 3/3 Pelt Collector on turn two, boost the damage potential of Chamber Sentry, or add loyalty counters to your planeswalkers. And with Teferi, Time Raveler, you can bounce Huatli's Raptor to do it all over again.

But there's more. If you control Vivien, Champion of the Wilds, then you can cast Huatli's Raptor, put its proliferate trigger on the stack, and convoke Venerated Loxodon in response. (You need to hold the control button on MTG Arena to respond to your own abilities.) The end result is that all creatures you tapped, including Huatli's Raptor, would gain two +1/+1 counters.

Venerated Loxodon fits the deck perfectly because if you convoke it via Emmara, Soul of the Accord and Growth-Chamber Guardian, then you benefit from both of their triggers, allowing you to go both tall and wide. This battlefield presence, along with Chamber Sentry to ping down 2/1s, should yield a good matchup against White Aggro decks. Meanwhile, the matchup against Esper Control is greatly helped by the three-mana planeswalkers from War of the Spark. Yukuhiro's deck is a true masterpiece.

3 Narset, Parter of Veils 2 Cry of the Carnarium 3 Unmoored Ego 4 Thief of Sanity

Grzegorz Kowalski also enjoys spicy decks, having won Grand Prix Lyon 2018 with his novel Red-Green Eldrazi deck. The Dimir Control deck he submitted this week, in which nearly half of the nonland cards stem from War of the Spark, shows that white is no longer a necessity for control players.

Indeed, Enter the God-Eternals and Tyrant's Scorn help deal with early creature rushes (reducing the need for Kaya's Wrath), and Liliana, Dreadhorde General and Ugin, the Ineffable can lock up the game (reducing the need for Teferi, Hero of Dominaria). What's more, staying two colors unlocks Blast Zone as a piece of interaction that doesn't take up any spell slots.

With 31 noncreature spells, Kowalski can exploit Augur of Bolas, God-Eternal Kefnet, and Narset, Parter of Veils. Augur of Bolas hits 78% of the time; Narset is 95% to hit per activation; and Kefnet can turn an Opt on your opponent's turn into a huge value play.

The first week of any new Standard format is usually dominated by aggro decks. With its abundance of white and red one-drops, this MPL debut week was no different. For Week 2, I expect the share of aggro decks to drop as players will gravitate toward adequate board sweepers. I'm also interested to see if Yukuhiro's and Kowalski's decks will catch on.

This was basically the first week to figure out the new cards, but the three-mana planeswalkers really impressed me. This was most evident in the match between Shahar Shenhar and Brian Braun-Duin. Teferi, Time Raveler did it all: bounce your own Oath of Kaya, nullify your opponent's Dovin's Veto, or cast Thought Erasure during your opponent's draw step. And Narset, Parter of Veils was essentially Dig Through Time that preemptively stopped Chemister's Insight. For Week 2, I anticipate a surge in the number of Narset, Parter of Veils and a corresponding downtick in Chemister's Insights.

Finally, I'm excited to see if anything in Week 2 can top Glogowski's brilliant play.

Tune in this Saturday from noon to 4 p.m. PT on twitch.tv/magic for more MPL action. You won't want to miss it.