Posted in Competitive Gaming on August 15, 2019

It's Week 2 of the Core Split in the MPL, meaning the Emerald Division is front and center. This was always going to be a heavyweight division with no fewer than five Hall of Famers, and the live show on Saturday features a full set of Magic's elite. Congratulations to Seth Manfield, Paulo Vitor Damo da Rosa, Martin Jůza, and Shota Yasooka, your field for the Top 4 bracket. Eric Froehlich (2-5) is the HOFer missing out, while Luis Salvatto (4-3), Jessica Estephan (2-5), and Alexander Hayne (1-6) couldn't stop the Hall of Fame rumbling to collective victory. Here's how the Top 4 made it happen:

Along with Yasooka, Manfield had Esper Control as his metagame choice for round-robin matches. An opening loss to Jůza's Mono-Red was soon forgotten, with four wins on the bounce. Against Salvatto's Jeskai Planeswalkers, the victory was fairly routine, but his win over Damo da Rosa was certainly not. If you get the chance, go see multiple Experimental Frenzy somehow not get the job done, and I know you'll hear more from Maria Bartholdi on this one during Saturday's show.

Seth improved to 3-1 over Froehlich, and a Top 4 slot was all but assured with a 2-0 win over Hayne on Esper Hero. A loss to Estephan followed, but he wrapped up the top slot by winning the Esper Control mirror against Yasooka. After a tremendous 6-1 record in the Core Split (where his only loss was to teammate Brad Nelson), Manfield did himself one place better this split.

The fun started early for da Rosa and his Mono-Red list in a startling match against Froehlich on Esper Hero. It's all very well knowing that Direfleet Daredevil is a potentially ruinous Magic card, but that's just not the same as watching the car crash unfold multiple times in all MTG Arena's technicolor glory. Suffice to say that Froehlich's deck doesn't like getting smashed in the face by Froehlich's deck.

From 1-1 (where Manfield began his four-match run of wins), PV got the winning habit in a big way, rattling off four wins of his own against Jůza, Hayne, Yasooka, and Estephan. That locked him for the Top 4, and although Salvatto took the 2 precious Mythic Points from the last match, PV could look ahead to the elimination rounds as the No. 2 seed.

One of the costs to playing Mono-Red is that sometimes an opponent has a sideboard plan that really messes with you. That's how Jůza opened his campaign 0-1, thanks to the words "Protection from Red" on Salvatto's Cerulean Drakes. But, just like Manfield and da Rosa, a four-game win streak was on the way. That run included victories over Manfield, Estephan, Yasooka, and Froehlich, before da Rosa ended the run in a three-game mirror match. Jůza ended his split with a 2-0 loss to Hayne, but he was comfortably in as the No. 3 seed earning the three-way tiebreak over Yasooka and Salvatto. Just as in the Core Split, Jůza has piloted Mono-Red Aggro to success.

Yasooka's story, with Esper Control, has four acts. Act 1 saw him lose twice to Mono-Red. Act 2 saw him dominate Esper Hero, with three 2-0 victories. Act 3 was a narrow loss in the mirror to Manfield, and Act 4 was the match that turned out to be the difference maker, against Salvatto and his Jeskai Planeswalkers. This was a fun one, and I'm certainly looking forward to sharing some Elderspell filth with you all on Saturday. It was a big win for Yasooka as he edged Salvatto on head-to-head tiebreaks for the last spot in Top 4.

It's a great lineup for Saturday, but, in the meantime, that da Rosa versus Froehlich match is really, really good. You can skip Game 1, but Games 2 and 3 are monsters.

We said last week that Márcio Carvalho had set the benchmark for Manfield, scoring 10 Mythic Points to move up to the all-important fourth spot in the overall MPL standings in the hunt for the World Championship invitations. Manfield duly did his part, matching that 5-2 record, and joining Carvalho on 78 points behind Brian Braun-Duin and Reid Duke (both 85 points) and Javier Dominguez (79), all of whom have yet to play their Core Split matches. Da Rosa and Jůza both had positive records, but didn't progress far up the table—they continue to sit midfield, with 56 and 52 points respectively.

In the Pearl Division last week, there were six Orzhov Vampire lists out of eight, with only Mono-Red Aggro and Bant Scapeshift lists for company. In the Top 4, Andrew Cuneo (Boros Feather) and Autumn Burchett (Mono-Red Aggro) tried to take down the bloodsuckers, but couldn't, with Carlos Romão claiming the first division title of the split and advancing automatically to Day Two at Mythic Championship V.

Metagame: Then and Now

This week, as Brad Nelson said on Twitter, "Everyone metagamed against Vampires. EVERYONE." Vampires went from 75% of the field to 0%, leaving us with a round-robin metagame of three Esper Hero, two Esper Control, two Mono-Red Aggro, and one Jeskai Planeswalkers, with the pairs of Mono-Red Aggro and Esper Control advancing to the Top 4. But the players got to choose new decks for the elimination bracket. Let's see who decided to stick, and who decided to twist:

2 Narset, Parter of Veils 1 Nissa, Who Shakes the World 3 Tamiyo, Collector of Tales

1 Nissa, Who Shakes the World

Once again I'll tag in Paul Cheon for the Top 4 metagame analysis:

So we have four terrific Hall of Famers going at it on the show this Saturday. Our opener is the top-of-the-table clash between Seth Manfield and Paulo Vitor Damo da Rosa. There's a little history here—da Rosa defeated Manfield in the quarterfinals of Pro Tour Hour of Devastation in 2017 en route to winning the event and clinching Player of the Year. It's tempting to dismiss that as ancient history, but it's worth noting that Manfield himself posted a link to that match on Twitter:

Before I play my match against @PVDDR as the top 2 in the Emerald Division I decided to watch this video to remind myself what not to do this time: https://t.co/z9nXhhPGS2

The loser of their Upper Bracket confrontation will face the winner of the match between Martin Jůza and Shota Yasooka. Jůza won their match earlier in the week. Whoever emerges from the Lower Bracket will still have an uphill tasking, needing to win two matches back to back in the Grand Finals. So join Manfield, da Rosa, Jůza, Yasooka, and your MPL Weekly team for our live show, this Saturday at noon PT/3 p.m. ET/7 p.m. UTC on twitch.tv/magic! 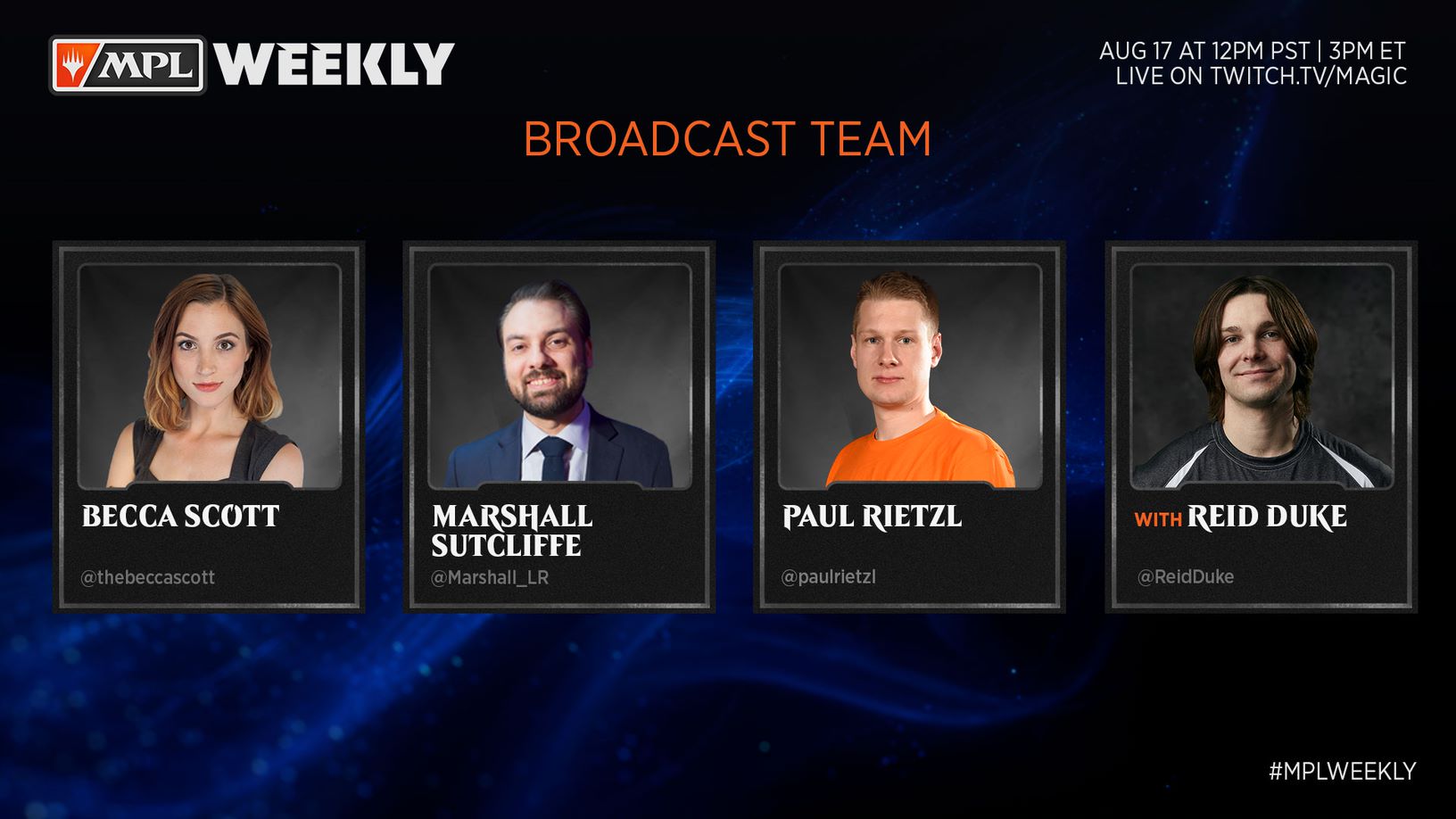 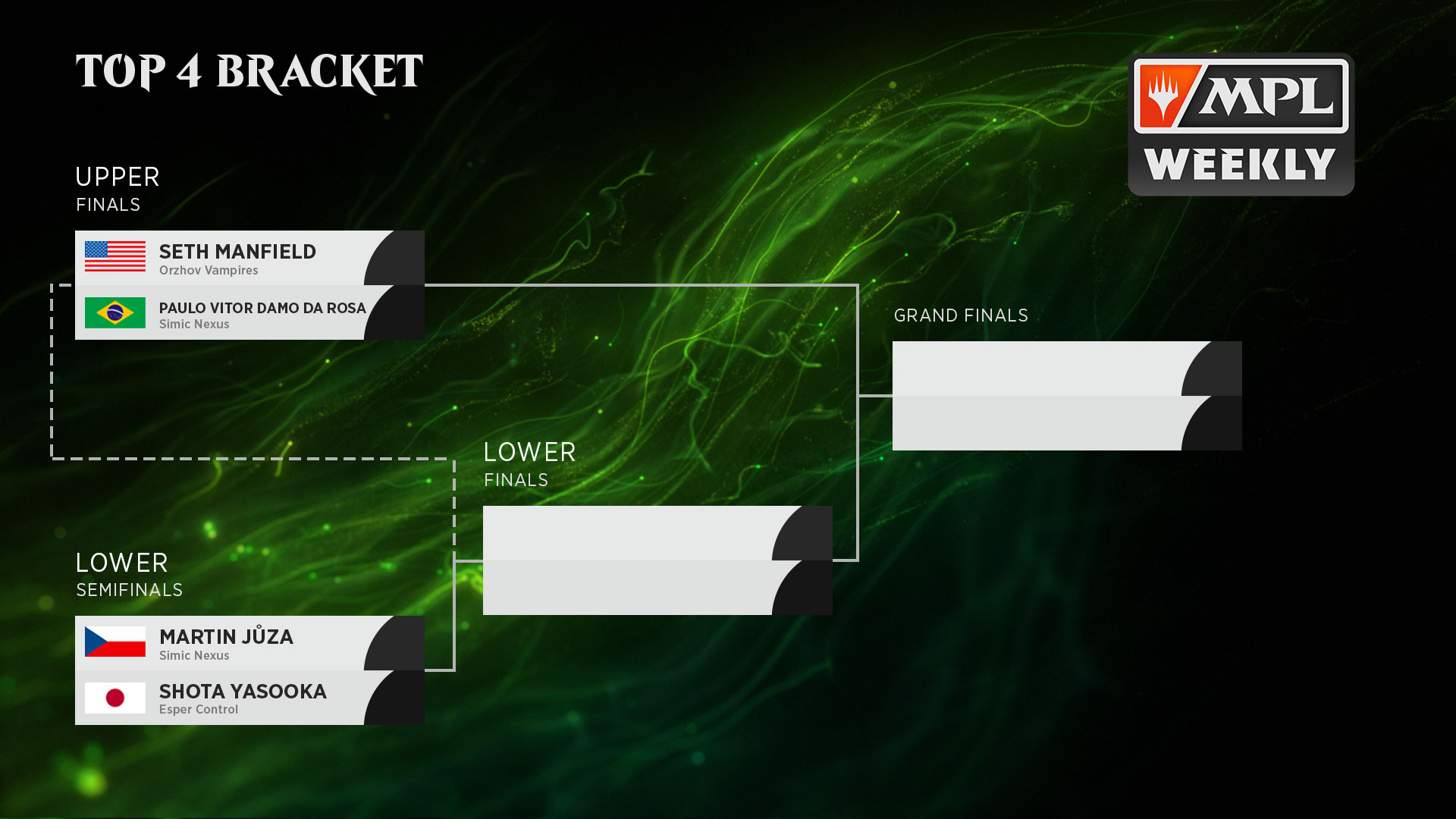 Posted in Competitive Gaming on August 15, 2019