What better way to celebrate the War of the Spark Prerelease than with the second Mythic Championship? Trick question—there isn't. We can't wait for the Mythic Championship II in London, and we hope you're just as excited! Read on for all the details.

When and how can I watch?

Mythic Championship II will be broadcast live on twitch.tv/magic April 26–28 beginning at each morning 9 a.m. local time (1 a.m. PT/4 a.m. ET/8 a.m. UTC). We'll be bringing round-by-round coverage straight to your screen, so tune in all weekend to catch the action!

For match-by-match updates, be sure to follow @MagicEsports and @Wizards_Magic on Twitter. To stay in touch on social media, use the hashtag #MythicChampionshipII.

Who will I see on stream? 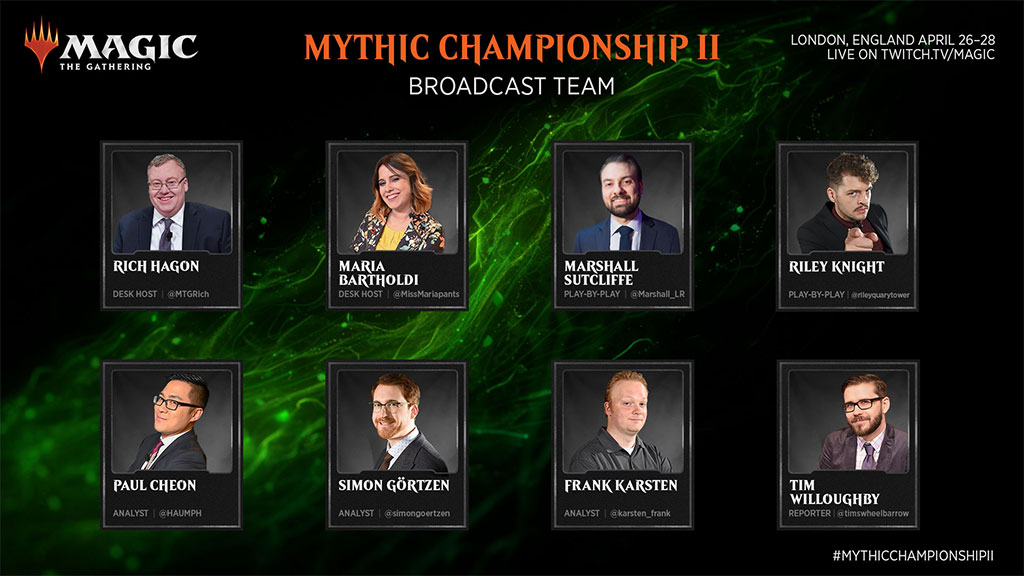 What is the format?

War of the Spark Booster Draft and Modern Constructed

During last month's Mythic invitational, streamers were able to co-stream the official feed on their own Twitch channels. This was a great success, so we want to again open that option up for this weekend’s Mythic Championship II in London. The intent behind this open policy is to encourage more regionalized viewing options and give creators the ability to convey information to their community in their unique voice.

Following Twitch's Content Sharing Guidelines, you can co-stream the from twitch.tv/magic using OBS or XSplit. This allows anyone on Twitch to be able to cover the event in their voice and with their community. As a reminder, co-streamed content is not endorsed by Wizards and we expect anyone who participates in co-streaming to follow Wizards' Fan Content Policy.

While we hope twitch.tv/magic is your go-to place to tune in to the Mythic Championship, more viewing options on Twitch is always better.

How does the money break down?

All prizes displayed in US dollars. Prizes subject to change.

Yep! And players get some in this event! Here is how they breakdown: