Posted in Competitive Gaming on August 8, 2019

Welcome to the start of the Core Split of the Magic Pro League. Things have changed a bit since Brad Nelson, Rei Sato, Ken Yukuhiro, and Brian Braun-Duin won their divisions from the Spark Split earlier this year, so let's dive in!

A single division will take center stage each week, with the eight competitors facing each other in round-robin matches across three days, before the best advance to the Top 4 bracket playoff which forms the heart of the weekend broadcasts. Once again, there's a ton on the line—two Mythic Points per match could be huge as players battle for a seat at the World Championship, while each division winner gets a free pass to Day Two of Mythic Championship V in October.

So, congratulations to our first Top 4 of the Core Split: Márcio Carvalho, Carlos Romão, Andrew Cuneo, and Autumn Burchett. Here's how they made it in:

There may have been Orzhov Vampires everywhere, but the start of Carvalho's run with that deck sure didn't look like it. He lost his opener to Andrew Cuneo on Dimir Control. Piotr Głogowski was on Vampires, but it was a decidedly Głogowski-ish list featuring four copies of Vampire of the Dire Moon—he was the only player to run the card. The other Best Player in Poland was next, with Carvalho completing the double by defeating Grzegorz Kowalski, who was running Bant Scapeshift. Since Carvalho is safely into the Top 4 bracket in first place, he'd probably be willing to tell you that the best match of his split came in one of his two defeats. If you get the chance, check out the full splendor of the Vampire mirror match against Brad Nelson; it really is top notch.

Romão on a Roll

The 2002 World Champion opened with a loss to England's Autumn Burchett, but in a seven-round event, "running hot" can often mean two match wins in a row. Romão and his Orzhov Vampires deck rattled off four back to back wins, claiming the points from Andrew Cuneo (Dimir Control) before the Vampires of Brad Nelson, Piotr Głogowski, and Christian Hauck all succumbed. Still, at this level things get tight fast, and a Round 6 loss to Márcio Carvalho, thanks to Vona, Butcher of Magan, meant Romão's seat in the Top 4 wasn't assured. For that, he needed to beat the Bant Scapeshift deck piloted by Grzegorz Kowalski. It went the full three games, but Romão combined his own hand disruption with Kowalski's anemic start to win the match, and advance as the second seed at 5-2.

Cuneo was one of only two non-Vampire players this week, and it looked like his Dimir Control deck was paying off when he sat at 3-1, boasting wins over Carvalho and Burchett, and the Scapeshift of Kowalski, with Brazil's Romão the only blemish. Then things got tough, with a comprehensive loss to Christian Hauck, followed by an excellent but fruitless 2-1 defeat to Brad Nelson. The last Vampires list to face was Piotr Głogowski. Needing a win, Cuneo dominated, and starts playoff action as the third seed.

Burchett Back in Business

Someone's going to have the rollercoaster storyline pretty much every week. This week, they're Autumn Burchett on Orzhov Vampires. A 2-0 start, with wins over Romão and Kowalski to start the split. That became 2-2, with losses to Głogowski and Cuneo. 3-2, defeating Nelson. 3-3, a loss to Carvalho, and then a game down in the last match against Hauck. Sanctum Seeker came to the rescue, and Burchett completes the Top 4 lineup.

Two points per match win in round-robin play means a ton of churn in the Mythic Points standings over the next four weeks (no Mythic Points are awarded for wins in the Top 4). Márcio Carvalho is the big winner this week, his 10 points lifting him to 4th place, and notionally in possession of a World Championship seat if the season ended today. That sets the bar for Seth Manfield, who will need to match Carvalho's 5-2 record when he takes his turn in the Emerald Division next week.

Brad Nelson's 3-4 record doesn't sound great, but it looks a lot better when you see he started out 0-3. And it's a similar story for Christian Hauck, who finished 3-4, but can still feel a lot happier than his 0-7 in the Spark Split. Meanwhile, Brian Braun-Duin, Reid Duke, and Javier Dominguez lead the way, and will look to add to their margin later in the split.

Metagame: Then and Now

Then: six Vampire lists is, er, quite something. I would say it's nice that Vampires are getting their place in the sun ...

Now: here's what the Top 4 players chose to bring for the playoffs:

4 Light Up the Stage 2 Skewer the Critics

Romão and Carvalho stayed on the Vampire train, while Cuneo and Burchett opted into different red-based aggro approaches. I grabbed a few minutes with expert commentator Paul Cheon for his breakdown on the Top 4 metagame choices.

"Márcio and Carlos decided to resubmit their vampires decks, which tells me that it is their belief that vampires is clearly the strongest deck in Standard," Cheon said. "Since they know that players would try to metagame against vampires in the Top 4 given that 6 copies of the deck were played in round-robin matches.

"Andrew Cuneo did something dramatically different by submitting a Boros Feather deck, likely so he could prey on Vampires as Márcio, Carlos, and Autumn all played that deck during the round-robin. The Vampires deck is light on removal and has very few ways to kill Feather.

"Finally, Autumn also swapped to Mono-red as it presumably has a good vampires matchup. Shock is extremely powerful as it kills nearly every creature in the deck and allows you to cast multiple spells in a turn to gain a tempo advantage."

Romão and Carvalho, teammates on 2017–18 Team Series finalists Hareruya Latin, renew their rivalry in the Upper Finals with Carvalho owning bragging rights with his round-robin win over Romão. The winner advances to the Grand Finals, knowing they're one match win away from claiming the massive prize of Day Two advancement at Mythic Championship V. The loser will face either Cuneo or Burchett, whoever emerges from the Lower Semifinals. In the group stages, Cuneo's Dimir Control handily defeated Burchett's Vampires. Once the Lower Finals is resolved, the winner there will need to claim back-to-back victories in the Grand Finals to become the division winner.

So join Márcio, Carlos, Andrew, and Autumn, and your MPL Weekly team for our live show, on Saturday at noon PT/3 p.m. ET/7 p.m. UTC on twitch.tv/magic! 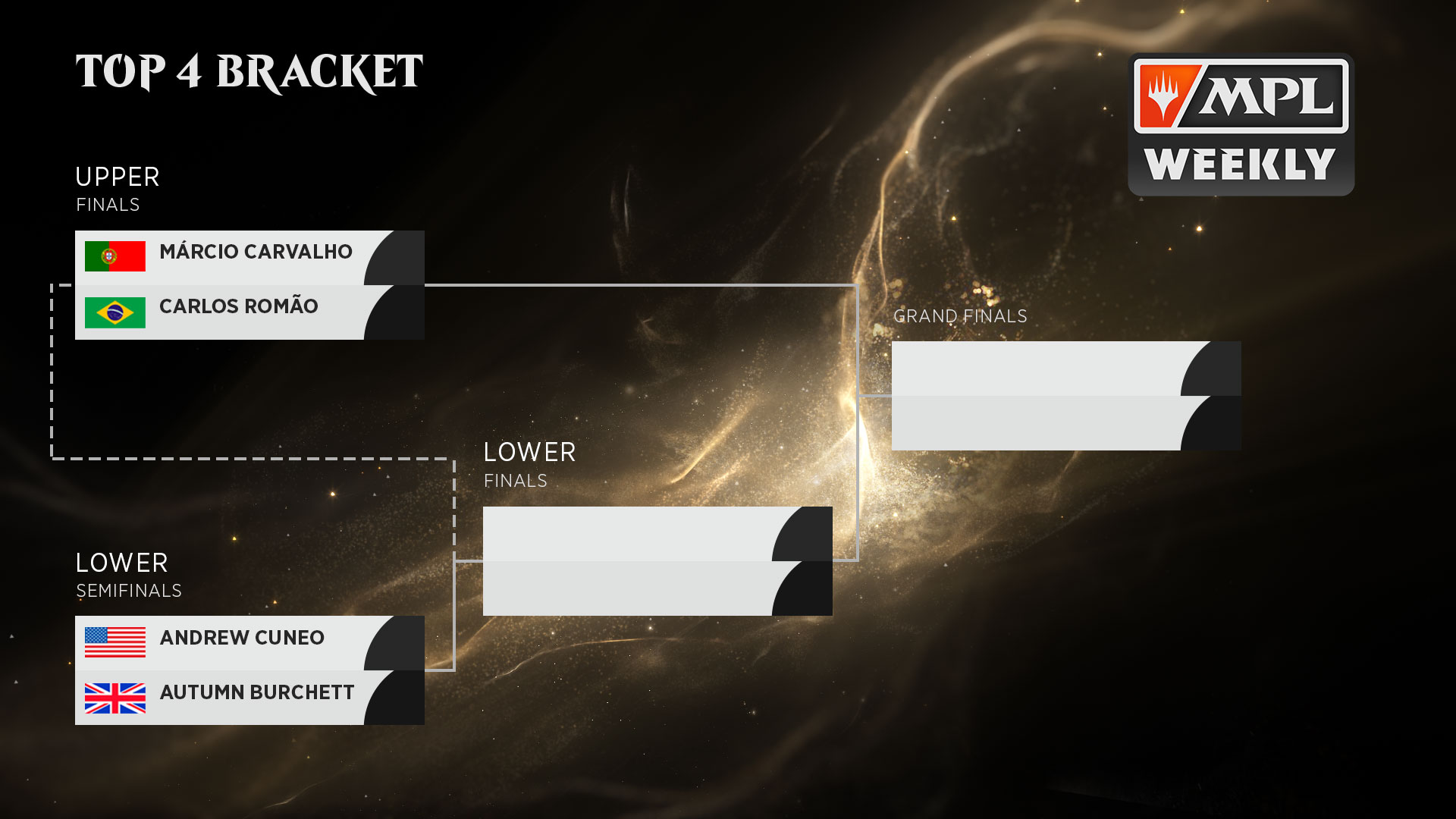 A monster lineup in the Emerald Division, featuring five Hall of Famers! See you next week.

Posted in Competitive Gaming on August 8, 2019