Posted in Competitive Gaming on November 8, 2018

New Standard, new beginnings. Pro Tour Guilds of Ravnica in Atlanta, Georgia, will feature hundreds of the world's best Magic players, Draft tech from the new set, Standard brews following a fresh rotation, and $250,000 in cash being awarded in total, as November 9–11 are your can't-miss days to tune in to twitch.tv/magic as we bring you live coverage from the event.

Of course, things actually get going today thanks to the 2017–18 Player of the Year Playoff between Seth Manfield and Luis Salvatto, so tune in to twitch.tv/magic today starting at 12 p.m. PT/3 p.m. ET/8 p.m. UTC to see who will earn the coveted title, and get a little taste of what to expect during this weekend! 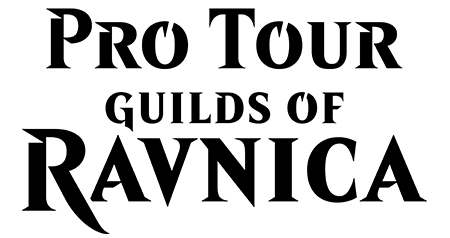 Here are all the key details that you need to know about Pro Tour Guilds of Ravnica:

Pro Tour Guilds of Ravnica is one heck of a way to kick off a new Standard Constructed format and new Team Series, and as always, Rich Hagon took a deeper dive into what to look forward to than I'll ever be able to do.

Tune in to Pro Tour Guilds of Ravnica on twitch.tv/magic starting Thursday, November 8 (hey, that's today!), at 12 p.m. PT for the 2018–19 Player of the Year Playoff and a Pro Tour preview from the coverage team.

Pro Tour action takes place Friday, Saturday, and Sunday, and it gets going at 9 a.m. local time each day. Since we're in Atlanta, Georgia, local time is Eastern Time, so that's 6 a.m. PT for West Coast viewers and 2 p.m. UTC (note that as of last week, U.S. time zones fell one hour back compared to UTC due to daylight savings).

In addition to that, VODs (videos on demand) of each round and segment will be available on our Twitch page. They get archived on our coverage page too, so you can go through all the rounds at your own pace after they conclude.

Here's who you will see on Twitch this weekend bringing you live coverage.

Round-by-round content, decklists, articles, pairings, results, and standings, and more can be found on the Pro Tour Guilds of Ravnica coverage page, so save that link for the weekend so you can see the latest.

The Pro Tour will also be broadcast in Japanese on Nico Nico and on Twitch, with Pro Tour Champion Tomohiro Kaji and many other Japanese coverage mainstays bringing you all you need to know if you're following along from Japan.

Standard Constructed Top 8 decklists will be posted shortly after the Swiss rounds conclude on Saturday. As for the rest of the top decklists, featuring all 6-4 or better decks, those will be posted on Sunday at some point during the quarterfinals.

If you can't watch the live broadcast but want to follow while out and about, follow @magicprotour on Twitter for the very latest. Join in on the conversation using the hashtag #PTGRN.

I, for one, am excited to see the world's top players explore a wide-open Standard format. How about you? Tune in to twitch.tv/magic to see it all live!

Posted in Competitive Gaming on November 8, 2018