Posted in Competitive Gaming on September 5, 2019

The MPL is back in business this week, and there's a ton to get through. Congratulations go to Matt Nass (5-2), Lee Shi Tian (5-2), Ken Yukuhiro (4-3), and Brian Braun-Duin (4-3), who join us for the Saturday Showdown at noon PT/3 p.m. ET/7 p.m. UTC on twitch.tv/magic! Javier Dominguez just missed out on tiebreaks at 4-3, while Shahar Shenhar and John Rolf had to settle for 3-4 records, leaving Janne Mikkonen (Savjz) adrift at 0-7. Here's how the Top 4 made it:

Nass had a tough Spark Split, finishing 1-6, then started his Core Split in an 0-2 hole with losses to Shenhar's Mono-Blue Tempo and the Kethis Combo mirror against Dominguez. But he turned things around winning against Braun-Duin, then playing a brilliant set against Yukuhiro. It's definitely worth your time to watch that one from start to finish.

The wins kept coming as he defeated Lee (Kethis Combo) and Savjz (Orzhov Vampires). At 4-2 even a loss might have sufficed, but Nass left nothing to chance by completing the five-match run with victory over Rolf, securing the No. 1 seed.

Like everyone in the Top 4, Lee played Kethis Combo, but it looked a poor choice after his 1-2 start. He turned things around in his fourth match against Shenhar. With the games tied at 1-1, Lee was under pressure facing lethal attacks over and over, each time staying alive for one more turn. Lee kept going long enough to get there, and that narrow win stabilized him at 2-2. His following three wins against Rolf, Savjz, and Dominguez secured his No. 2 seed for the weekend.

It was a topsy-turvy week for Yukuhiro. The tough part of his schedule came first as he faced Braun-Duin, Nass, and Lee in his first three matches, emerging from that gauntlet at 2-1. But there was no momentum as Dominguez pulled him back to 2-2, then Yukuhiro went to 3-3 with a victory over Savjz's Vampires and Rolf's Esper Control. That made Shenhar with Mono-Blue Tempo a must-win for Yukuhiro. Siren Stormtamer with Curious Obsession were quite the threat, but Yukuhiro squeaked out a win to become the No. 3 seed.

Starting out 0-3, Braun-Duin must have wondered whether he'd made the wrong call by playing Kethis Combo. Every remaining match win was needed, and by the time he'd defeated Dominguez (Kethis Combo), Shenhar (Mono-Blue Tempo), and Mikkonen (Vampires) he was back in the hunt. John Rolf with Esper Control, something that Braun-Duin knows a thing or two about, was the clinching victory as The Elderspell secured his No. 4 seat for Saturday.

When Zac Hill made the Top 8 of Pro Tour Honolulu in 2009, he had the letters "FOWYDRN" written across his knuckles. The message? Focus on what you're doing right now. Hill was in his final Magic tournament ahead of joining Wizards of the Coast, and used that acronym to, well, focus. That's what we saw in action across the MPL this week.

Ken Yukuhiro – Frustration with never winning two in a row, constantly restarting his run. FWYDRN: Defeat Rolf for the 4-3 and No. 3 seed.

Brian Braun-Duin – The worst possible start at 0-3. FOWYDRN: Four straight wins to go 4-3, a tiebreak edge over Javier Dominguez, and through to Top 4 as No. 4 seed.

Want to be a better Magic player? FOWYDRN.

Braun-Duin may look back to this as the week he secured a place in the 2019 World Championship. His 8 points take him to 93 for the season, and 1st place overall. Shahar Shenhar's 6 points take him to 71 points overall, well within range of Márcio Carvalho and Seth Manfield who are tied for 4th on 78. Ken Yukuhiro enters the Top 10, with his 4-3 record taking him to 68 points on the season.

Metagame: Then and (Still) Now

The metagame for round-robin play was all about the emergent deck from the Mythic Championship Qualifier weekend for Mythic Champion V: Kethis Combo.

To my absolute non-astonishment, Braun-Duin (a man who lost to all three Top 4 opponents, all in Kethis Combo mirror matches, and a man who is a master of all things Esper) switched things up for the weekend and moved to Esper Hero. The other three stayed true to their combo successes through the round-robin matches.

Here are the Top 4 playoff decklists:

4 Hero of Precinct One 4 Elite Guardmage

4 Hero of Precinct One

There's a little more going in here as players look to metagame the metagame, as Paul Cheon explains:

What is it about a new combo deck that pulls our collective chain? Few things set our pulse racing more than a combo deck coming from nowhere to dominate a metagame, and seeing all four players qualify for the playoff with the same Kethis Combo deck may have hearts racing. But why?

The nature of combo decks is that they are all different. Aggro decks throughout history look similar to each other. A Jackal Pup from 1997 and a Skymarcher Aspirant from 2019 are a parallel we can grasp. The same is true with control Counterspell to Mana Leak to Negate: their gameplay is the same.

But combo challenges us every time. Nexus of Fate looks nothing like Kethis, the Hidden Hand. Diligent Excavator has nothing in common with Cryptolith Rite. Scapeshift and Jace, Wielder of Mysteries are entirely different ways to win. The thrill of each new combo deck is that we don't see it coming, and the pieces aren't part of our everyday Magic experience.

Saturday kicks off with Matt Nass against Lee Shi Tian in the Kethis Combo mirror, with the winner advancing straight to the Grand Finals. That will be a great introduction to Kethis, the Hidden Hand gameplay if you haven't been following along. Nass is a master of combo decks, and loves playing anything that creates a different landscape in a game. The loser from the upper bracket will take on the winner of the lower bracket semifinal, featuring Ken Yukuhiro (Kethis Combo) against Brian Braun-Duin (Esper Hero).

If Braun-Duin made the right metagame call, he is in for a big weekend playing against Kethis Combo all the way. Both he and Yukuhiro know what's at stake, with both aiming to win their MPL Division for the second time and advance to Day Two of Mythic Championship V next month.

So we're all set! Watch our Top 4 on our MPL Weekly live show this Saturday at noon PT/3 p.m. ET/7 p.m. UTC on twitch.tv/magic. 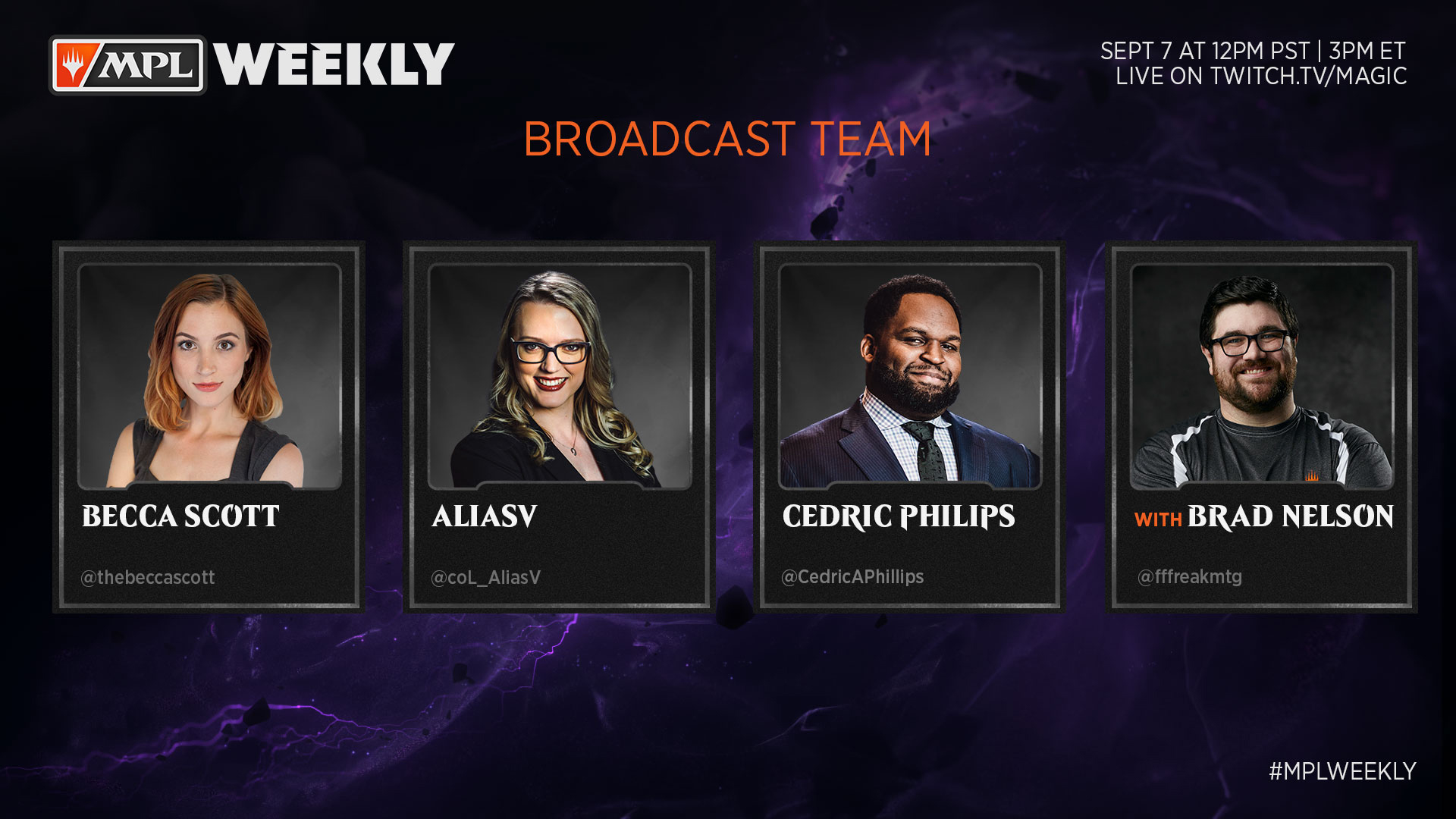 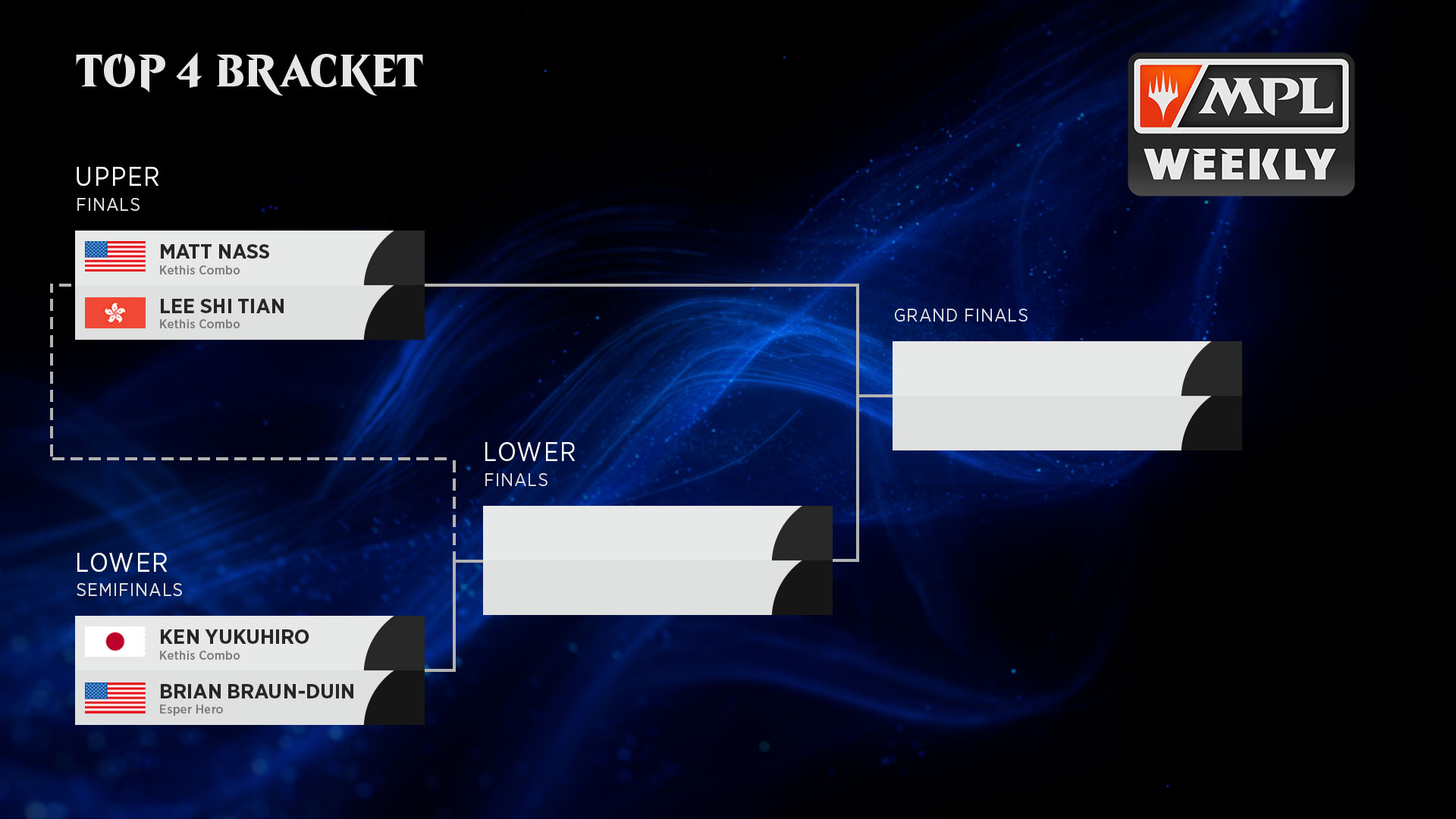 Posted in Competitive Gaming on September 5, 2019