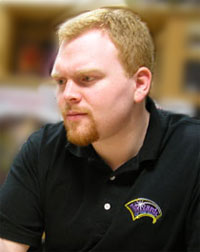 Now, on with the show! I am proud to announce, the next in my lineup of crazy sweepstakes and giveaways…

THE CONTEST OF THE YEAR!!!

What is the Contest of the Year you ask? This contest will be the coolest giveaway for Magic in 2006! Ramping up to Magic Weekend (the combined U.S. Nationals/JSS Championship event in Atlanta), Wizards of the Coast will be offering an exclusive sweepstakes where you, the trusty Magic fan, can win one of three amazing prizes. The prizewinners will be announced by Magic creator Richard Garfield live from the Game of the Year at Magic Weekend on July 29, 2006. And if you’re at the event you can claim your prize right there! Enough jibber jabber, let’s talk about the prizes!

The Three Prizes (without any further ado)

Last year, Wizards of the Coast changed offices to our new palatial sweet across Lind Avenue, in scenic Renton, WA. During the move, I found a variety of things, both strange and rare. The strangest thing that I found in our move last year was a pair of Richard Garfield’s iconic mismatched argyle socks. For those of you that don’t know, Dr. Garfield is famously know for having mismatched socks that may or may not give him fabulous powers.

Hailing from the Homelands release event, these particular socks were pinned to a picture of a man wearing a Hurloon Minotaur suit (at least, I think it was a man in a suit). The weirdest thing about the socks was not their golden glow, but rather their freshly cracked booster pack smell. Before you think I’m a sock-sniffin’ weirdo, I would like to point out that the socks had been marinating under lock and key for approximately 8 years. Anyway…

The second prize is for the true gamers out there. One of R&D’s goals with Coldsnap was making it jibe with and feel like the Ice Age and Alliances sets, while incorporating modern card development. I believe that R&D hit the ball out of the park, but who better to determine if they truly did their job than you? The winner of this prize will win 4x Ice Age block. What does this mean?

If you win, you will receive four of each and every Ice Age, Alliances, and Coldsnap card. That’s right, the winner will get four Force of Wills, four Sulfurous Springs, and four Sunscours. And that’s just the tip of the Iceberg (hardy-har-har).

Another key mission for our Magic Creative Team was to make sure that the art direction of Coldsnap incorporated some nostalgic elements of classic Magic art while also using current Magic art direction. If you win this prize, you will be the judge if they succeeded. And why not have the piece of art firsthand…? The winner of this prize will receive an original, one-of-the-kind framed Jeremy Jarvis art piece from Coldsnap, Adarkar Valkyrie. You got to get your mitts on this frosty little number!

Which one will you win? None of ‘em, unless you enter. Entry is free, but is limited to those ages 13 and over in the U.S. and Canada. For official contest rules click here. Enjoy!

Magic: The Gathering "Contest of the Year" Sweepstakes Entry Form

[The contest originally included in this article has been removed.]