The method to Planar Chaos's madness.

As a nod to the set's theme and the collaborative nature of creative endeavors, Matt Cavotta invited some other members of the Creative team to provide an “alternate” take on the flavor and philosophy of Planar Chaos. These articles will run in the Taste the Magic slot sporadically over the next couple of months. Enjoy!

Mirri! Red Morphling! It's madness, I tell you! Madness! But as with all things Magic, there's a method to that madness. In this article I'll reveal some of the arcane laws and structures that govern the flavor of Planar Chaos (and Time Spiral for comparison) – the shape of the chaos of Planar Chaos.

As any of my co-workers can tell you, I have lots of little theories, and this is one of them. What does it mean? 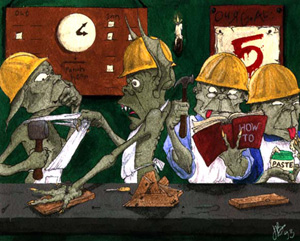 There are Magic players who believe Magic flavor would be better if it “loosened up,” if it were more random, if it contained a little bit of everything for everyone, every time. Reef Pirates, Squirrel Wrangler, Power Armor, Chicken a la King, Ninja of the Deep Hours, The Cheese Stands Alone, Mother of Runes… throw it all in! Random is awesome! Hooray for random!

Well, I should qualify that. Maybe random was the right choice during Magic's first years. The game – heck, the whole notion of a TCG – was new and wild and woolly, and the game's flavor reflected that craziness. But as Magic came into focus, as its designers and players began to understand how it worked and why, its flavor tightened up, too. Now, over a decade into the game's life, random is just not enough. Perhaps more importantly, random is unsustainable. A random grab-bag of flavor, set after set, would have players snoozing before you could say “Presence of the Master”

Coherence, on the other hand, creates depth, structure, and interest. It provides a way for cards to go beyond their edges and connect with other cards through a larger theme. Among all Magic blocks we've produced, which is the least random? Kamigawa is close, but the kami are so inherently random that it gets 2nd place. What's the most coherent? Ravnica. The city world, the guild structure… everything has a context and a place in a larger system.

But total coherence, nothing out of place, everything neat and tidy — that's stifling. So even Ravnica has its touches of randomness, its Torpid Moloch, Hunted Lammasu, and Drekavac. The cards that lurk just outside the larger systems are like lookout points, allowing you to appreciate the overall flavor more.

Here's another little theory of mine:

Each Magic block should be the opposite of the last in at least one way.

You guessed it. The Time Spiral block is easily the most random block flavor-wise, partially because its designers set out to make it random. And for the Creative team, that meant it was kind of a problem – a fun, nostalgic problem, sure, but a problem nonetheless, because flavor and incoherence don't get along very well. Somehow, we had to create a tiny bit of coherence – something to link cards as disparate as Ghost Ship and War Barge. Then it hit me: Ships! We would create a mighty Ship theme!

Okay, that didn't really hit me. Not so much on the Ships. (To that one guy who's going to quit Magic because I did away with the Ship type: Sorry, man. Calling a ship a creature is just too dumb.) 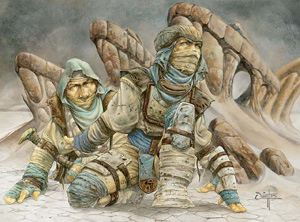 Aiding us in the search for a modicum of coherence was Time Spiral Block Law #1, already partially in place: Cards in the Time Spiral block represent things in 'present-day' Dominaria (I mentioned this in my Legends of Time Spiral article). For many years now Magic has followed the pattern of “one year, one block, one plane,” and we felt it would help the block – and the game as a whole – to keep that pattern. We didn't feel it was too restrictive to limit the cards to Dominaria, because that plane contains the vast majority of places Magic players know and love: Benalia, Shiv, Llanowar, Tolaria, Urborg… The list goes on and on.

Even that rule was hotly contested early on. The designers were excited about making nods and references to cards from all over Magic's history, and therefore from all over the Multiverse, including places far from Dominaria, such as Kamigawa, Rabiah, Mirrodin, and Ulgrotha. They didn't want to be constrained at all. But after some hedging and convincing (by deciding, for example, that Rath qualified as Dominaria in a cheaty way thanks to the planar overlay during the Phyrexian Invasion), everyone agreed to stay in Dominaria – with one caveat, one big compromise.

The compromise gave the designers lots of freedom and created Time Spiral Block Law #2: The “timeshifted” cards are not really in the set, in a way, and therefore not subject to the set's continuity. Mealy-mouthed, I know, but it basically amounts to this: Because they're a quasi-independent subset of cards, the timeshifted cards can come from anywhere and anytime. They're a playground for the block's nostalgia themes to run wild. That's why non-Dominaria cards such as Eron the Relentless and Sindbad appear among the Time Spiral timeshifted cards. (There are lots of these laws, many of them obscure and boring, so I'll itemize only the relevant ones.)

To be fair, I did ask the designers to try to refrain from including more recent cards that would fly in the face of Dominarian flavor and continuity, such as, say, Kitsune Dawnblade. I felt these cards would be disruptive to the overall feel of the set, but more importantly, it's hard for players to be nostalgic about cards from the last couple of blocks. (“Remember five minutes ago? Man, those were the days!”)

The “not subject to continuity” law became even more important for Planar Chaos than it was for Time Spiral. Before we had reached this compromise, no one had any idea what the hell Rosewater was blathering about when he said Planar Chaos would be the “present” set. After all, Dominaria has been devastated by many successive cataclysms. There's not much left of the plane to get all misty-eyed about in its 'present day.' But once the timeshifted cards were freed from continuity, the stage was set for Mark's 'alternate present' idea.

So the Planar Chaos timeshifted cards aren't beholden to the set's continuity. Does that mean they have no laws of their own? Initially I thought so. In the card concepting stage, I look at a card's rules text and try to figure out what would best represent it given the setting. Each Planar Chaos timeshifted card was its own little setting, and I was having great fun finding a new and crazy “What If?” for each one. When Matt Cavotta saw the results, he was bewildered. He was furious. He used his card-throwing powers for evil and lacerated me from across our cubicles. Then he backhanded me across the face. It's true. 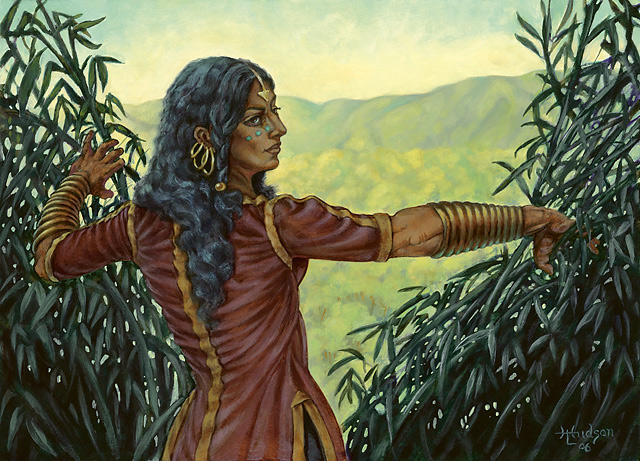 Much to Matt's dismay, I had concepted a few timeshifted cards without regard to the setting of their source cards. For example, for more than one card timeshifted from Arabian Nights, I had chosen a concept in the card's new color that clearly had nothing to do with Rabiah. Matt felt strongly that the whole idea behind Planar Chaos's alternate-timeline cards would be way more clear if Law #2b were obeyed. So I complied and came up with replacement concepts that were within the boundaries of Rabiah. In hindsight, I do think the added coherence helps the set. Coherent is good.

The Bacon of Legends

When you take a wide look at Planar Chaos, I think you'll see its patterns and internal logic. The regular cards in the set represent present-day Dominaria, still struggling to recover from its devastation. The timeshifted cards represent isolated results of many alternate timelines, both Dominarian timelines and those of other planes.

You've already seen the best example of this: the alternate-timeline legends – Braids, Mirri, Akroma, and the others. They're not exact duplicates of preexisting cards with a different color of mana in their costs, and that means they're not timeshifted cards. But they're also not a part of present-day Dominaria, so they don't follow the logic for regular, nontimeshifted Planar Chaos cards, either. There's one per color, and all are from Dominaria's history. So there is some coherence. But… Danger! Danger! These cards are in violation of Time Spiral Block Law #1!

In the end, we decided that was okay, because the legends are tasty enough to justify their unlawful bent. After all, what would Planar Chaos be without a little continuity chaos? I hope you agree that the legends were worth doing despite not fitting perfectly into the larger scheme of things. Until next time, may all your salads have a random sprinkling of legendary bacon.