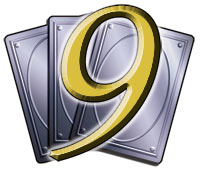 s the highly anticipated release of Ninth Edition approaches (release events are July 29th) we wanted to give you an early look at some of the things that set this core set apart. First off, we’re sure you’ll agree that the new art for Ninth is incredible. So to start things off, we’ve divided all the new pieces for this set into four groups for your viewing pleasure, based on the first letter of each card name. We’ll show one group per week, in the order you voted for them last week. (You Decided!) As a reminder, the groupings are a-e, f-j, k-r, and s-z. Once you think you know which card goes with each illustration, head to the message boards to see how you compared with the rest of the community.

And while the art is incredible, that’s just one thing that will set Ninth Edition apart. Each week, below the art section, we’ll show you three or more full card images from the new set. This section will include cards which show new changes to the way the core set has been put together as well as cool reprints that are either returning after an absence or are making their first appearance in Magic’s core set.

So whether you’re trying to figure out what’s in the new set, checking in to see what all the buzz is about, or just enjoying the art, have fun with the articles and make sure to get out for those release events. Enjoy! 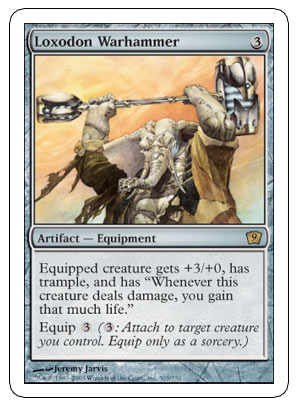 When I was originally setting up this series of articles and dividing up the four groups of cards to have roughly the same number of new art pieces, it conveniently turned out that each group also had the right number of new changes and cool reprints. (One group had considerably more cards for this second section, but that comes later.) One of the most common questions I get at Ask Wizards is “Will there be equipment in Ninth Edition?” It’s nice to finally get the chance to answer that one! 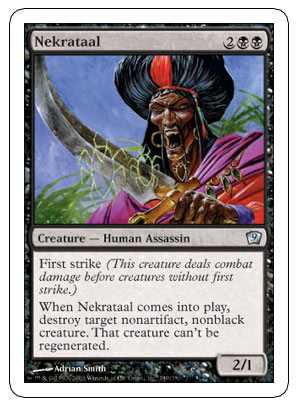 Another big change that arrives with the new core set involves creature types. One of the most contentious debates in Magic has involved what to do about unique creature types and creatures that have creature types that seem out of place when compared to other, similar creatures (such as Savannah Lions being a Lion rather than a Cat). Take a close look at our friend Nekrataal here and you’ve got the answer to how at least part of that debate turned out. 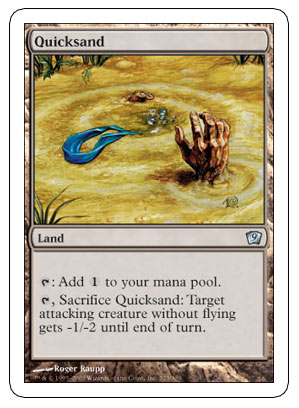 While much of the buzz surrounding Ninth Edition will come from the new changes it brings, plenty of attention will also come from great cards either returning to or even making their first appearance in the core set. This popular land, which saw plenty of tournament play in its day, will make its core set debut in Ninth Edition after having been out of print since way back in 1997.