The Daily Magic Update is a roundup of everything Magic you should know on September 8, 2017. Today's Update is brought to you by Magic: The Gathering Arena, now public to the world, and me, Nicholas Joseph Wolfram (so close, Blake).

If you missed it, I'm not sure why you're even still reading this. Go watch the stream! I know it had everything I wanted packed into it: Dinosaurs, Pirates, new Ixalan cards, that dreamy Nate Price guy, and of course the latest digital implementation of Magic: The Gathering. With the full suite of Magic rules!

Actually, even if you have seen it, why not again? And for more information, check out this article from Jeffrey Steefel.

I thought Pirates were supposed to hate leaks, but I guess they don't mind as long as it's mana. And not theirs.

Here is the card in English, in case you can't read Chinese Traditional: 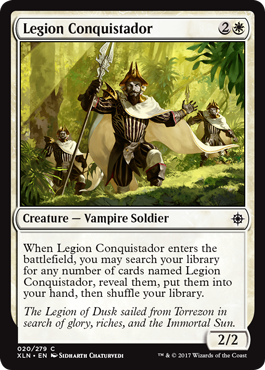 Another day, another awesome new transforming Ixalan card. Hey, between this and the other two legendary Ixalan transform lands with colored mana, this is starting to look like a cycle. Hmm . . .

Chupacabras?! Exploration on Ixalan sure is revealing a lot of fantastic Beasts—even if some of them are quite horrifying!

There will be a lot of previews coming out of HASCON today, including some from Ixalan and a boatload from Iconic Masters, so stay tuned!

Leave it to Modern players to get most excited about a seventeen-year-old common reprint during a preview season full of Dinosaurs and Pirates.

Although, to be fair, I'm pretty psyched about this, too. As is my Mentor back at the Monastery.

Preview season isn't even half over, and Ixalan Limited is already looking like it's going to be a fun, wild environment to play in. Neal has picked seven cards that prove it.

This week, Meghan and Maria discuss Ixalan leaks and previews, gaming language that should probably be left behind, and eating dirty raw potatoes.

After some great performances at Grand Prix Washington, DC, both Corey Baumeister (who made his third Standard GP Top 8 in a row!) and Matthew Severa have jumped onto the Top 25 list at Nos. 16 and 20, respectively. Well done, gentlemen.

After the big reveal yesterday, the internet is buzzing with first impressions. Let us know what you think, too! Tweet us @MTG_Arena and use #MTGArena.

In one last hurrah before rotation, Matt piloted Mardu Vehicles to a Grand Prix victory in Washington, DC, last weekend. With a few tweaks, some Hour of Devastation Deserts, and couple sideboard tools, the deck was able to retake its top spot.