The Daily Magic Update is a roundup of everything Magic you should know on September 13, 2017. Today's Update is brought to you by piles of Treasure and chocolate.

Treasure tokens are delightfully flavorful and versatile tokens in Ixalan. Chris goes deep into how they will likely end up impacting different formats once Ixalan makes its landing.

Now I want to go around substituting chocolate bars for cards in different effects and see which produce the best ones. Enter the Infinite definitely seems like the best choice for maximum chocolating.

Hm. This card has a lot more German on it than I understand. I think it says something about lands, cards, games, and libraries, but that's all I've got. Fortunately, we have an image of the card in English here as well. 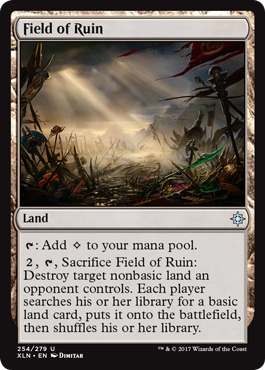 Hey look—I even got some of those words right!

If this is what Dinosaur-themed commons look like, it may be easier than I thought to force Dinosaurs into every Limited deck I build during this block.

The Command Zone will be previewing a card later today, so keep an ear out for that.

Meghan and Maria dive into the wonders of Magic's next digital adventure. They also discuss some new set called Iconic Masters or something? I dunno, sounds pretty cool though.

Not to be the only podcast not talking about Magic: The Gathering Arena, the Limited Resources guys are joined by Ryan Spain as they discuss MTG Arena and everything it has to offer.

With the Ixalan story already underway, it's time to make sure you're caught up on all the background information leading into it.

After seeing first-hand the amount of work that Blake Rasmussen put into making this one of Magic's greatest preview seasons ever, even after a massive leak, it's great to see the community acknowledge his efforts. Thanks, everyone!

This Abzan good-stuff deck that Magic Online player Zturchan used to win a PTQ leverages Modern's best removal and some of its most powerful creatures to hammer the opponent into submission.