i, everyone. I hope you are as excited for Modern Masters as I am. I'm even planning on heading out to Grand Prix Las Vegas to play in the event. These days, that is a big commitment for me, as I don't make it out to many Grand Prix anymore; I'd love to be playing more, but my wife usually prefers I spend the weekends with her and our four lovely children. I don't mind saying I usually prefer that, too.

Today, though, I am here to announce what I think will be a very important card in Modern Masters. I have the pleasure of announcing that Dark Confidant will be included in it. This is obviously a card that is near and dear to my heart. I am going to cover a bit of the history of the card and discuss the impact that it being included in Modern Masters may have. 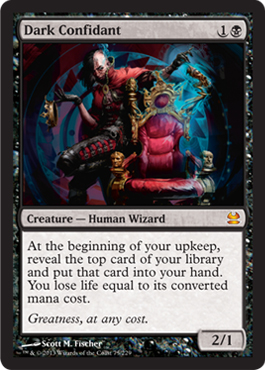 I feel like I should stop here and give an apology.

I am sorry. I am sorry to all of those players who racked up countless warnings for missing upkeep effects. I am doubly sorry to all of the judges who had to hand out warnings, more warnings, and game losses to those players. As great as Dark Confidant would have been if the ability had been a "may" ability, I believe Mark Rosewater was correct that it would have been too powerful and outside of the flavor of the card. As much as I appreciate technical play, I don't think anyone ever wanted missed effects deciding games as they have so many, many times.

The lion's share of the credit for Dark Confidant has to go to Mark Rosewater. I had no real design idea for a card. He sat with me and shaped miscellaneous comments such as "I don't want it to chump block," "I want it to draw cards," and "It needs to be two or possibly three casting cost," into Dark Confidant as it stands today. Mark was so good at his job that he knew what I was looking for before I did. Thanks again, Mark.

It has been great fun since the card was released as well. I love hearing all of the stories from people either loving or hating the card. The number of times I have been asked to sign a Dark Confidant is humbling. Of course, I have my own stories. Dying to my own Dark Confidant in the finals of the Vintage Championships at Gen Con, that is one I will never live down. It has all been a new way to engage in the pastime that has meant so much to me over the years. It has added an element to Magic that I never knew was missing.

But enough about the past. We should talk about Dark Confidant now. Dark Confidant obviously represents card advantage. The price is unknown and the reliability changes from deck to deck. I know I have turned over more than one Inkwell Leviathan on my upkeep. I am sure there will be some people playing Modern Masters limited who might do something similar. Some will be at Grand Prix Las Vegas and others will be drafting and playing Sealed.

In many Sealed and Draft pools, Dark Confidant is usually too dangerous to play. There is always a chance in Modern Masters that it will work better, though, as many Modern staples are at a very low mana cost. I know I would be more than happy to pay 2 life to get a Tarmogoyf on my upkeep. All in all, it is buyer beware in Limited with Dark Confidant. I have had people tell me that Dark Confidant was unbeatable in the original Ravnica drafts, that it was unplayable, and everything in between. I say go for it. After all, the original quote is "Greatness, at any cost."

In Modern, I believe Dark Confidant will continue to be a staple card in many decks. It is such a potent card and represents such an advantage over the long term that most decks will do whatever is necessary to get it off the table. If opponents do not have a way to deal with it or are unlucky enough not to draw an answer, it offers a huge advantage for you early in the game. If you have watched any coverage of high-level Modern events, I am sure you have seen Dark Confidant being played, and often dying, very regularly. I don't believe there is any reason to believe that will stop in the near future. Even if Dark Confidant isn't featured in the top decks at a given time, you still cannot ignore the fact that it exists. It will always put certain demands on deck builders trying to brew the next big Modern deck. Whether you choose to play it or not, the advantage is too big to ignore. I am just disappointed that at times I will be watching Dark Confidants with new art. 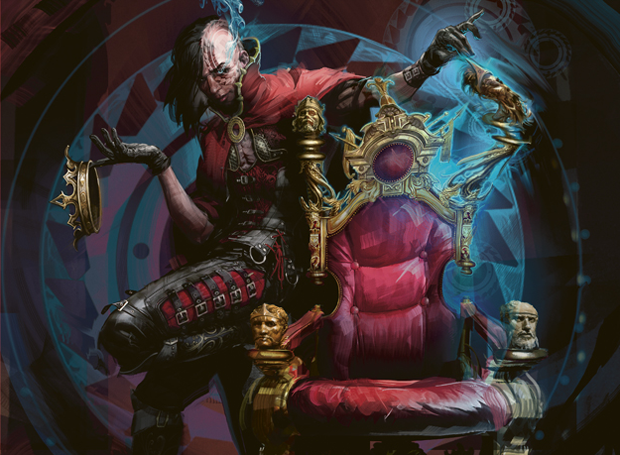 Now that I have mentioned the new art, I won't ignore the biggest change, from my point of view, on the card. I will really miss all of the Dark Confidants bearing the old art. It has been something special for me from the beginning. Any of us who were fortunate enough to win an Invitational never imagined we would have to see our cards being reprinted without the original art. We were never promised that it wouldn't happen; it just wasn't something we could foresee. That being said, anyone disappointed with the change, myself included, has to realize that this was the only way it could be. If I am being honest with myself, it wouldn't be fair any other way. How would Chris Pikula or Jens Thoren feel if they had the art on their cards changed and mine stayed intact? I have to believe that would just open up old wounds all over again. At this point, I think the precedent has been set. If, in the future, Wizards decides to reprint another Invitational card with the original art, you may hear me singing a different tune. For now, it is what it had to be.

To be fair, I also got to have my card reprinted in the old card frame. I still remember the day that Ray De Guzman sent me a copy of the image. He and I used to play together in the early days and played quite a bit of Vintage, then called Type I, and he knew I would really enjoy the old card frame. I am just hoping that the reprinting of the card will make the original a little easier to get my hands on. There are times when I want to sign one of them and send it to someone, and that can get really tough over and over. Neil Reeves at Mizewell Games used to collect all the Dark Confidants he could get his hands on and then just give them to me. It has been a while since those days, but that helped out a ton. Maybe now I can find a few to put in reserve.

In the end, I don't want to give the wrong impression. I still find it really special to be involved with Dark Confidant. Those of you who refer to the card as "Bob," keep on doing it. If you want me to sign one, don't hesitate to ask, regardless of what art is on the card. Consider this fair warning though: I may draw a stick figure version of myself sitting in that empty throne. It also may or may not have a chat bubble as well, saying "Greatness, at any cost."