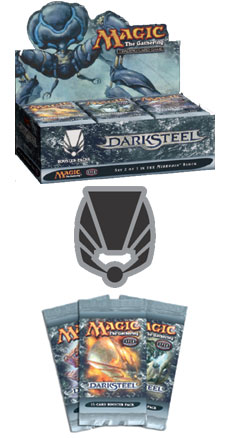 Darksteel introduces two new abilities to the Mirrodin block and expands on affinity by including spells that have affinity for different basic land types.

Glissa, Bosh, and Slobad must flee across the harsh world of Mirrodin, running from an enemy who seems all-knowing. Within the deepest reaches of their world, the Darksteel Eye watches. And waits.

(For the Darksteel FAQ, see the Magic Set FAQs page.)

"The world . . . is . . . hollow." This is the secret that Chunth, the Tel-Jilad troll elder, entrusts to Glissa Sunseeker before his death at the hands of a traitor. Armed with that knowledge, Glissa fights her way through the great vedalken capital of Lumengrid, down into the Pool of Knowledge. The Synod's sacred chamber contains a lacuna--a tunnel, saturated with blue mana--that leads to Mirrodin's secret interior. There, huge, bizarre towers of funguslike metal called mycosynth reach up toward an immense inner sun of pure mana.

As Glissa flees from her vedalken pursuers, she discovers another secret inside this plane. Memnarch is real, and he patiently waits for the elvish champion to find him. In the meantime, he has begun to build a monument to his greatness as an artificer: the Darksteel Eye, a device that will make his omniscience over Mirrodin complete.

The Darksteel set is everything you loved about Mirrodin and more: more equipment, more artifacts, more abilities, and even more cards. Darksteel is the first "small" Magic expansion to release with 165 cards. Among them, you'll find artifacts that are indestructible--which means just what it says: destruction effects don't send them to the graveyard. And if its an indestructible creature, damage won't do the job, either.

The only things getting broken here are rules.
Arm yourself with Darksteel. 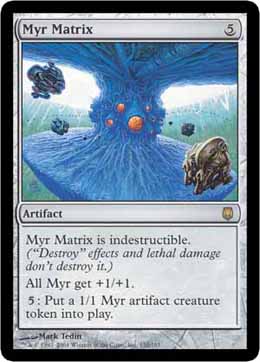 Enter... The Matrix
by Mark Rosewater

The Evolution Of Oxidize
by Randy Buehler