He'll try to tell you that the original list of Miracle-Gro (twelve or so cards off from his Vegas version) is French. Still, he was the man who brought it to the forefront. The fruits of his labor are here at Grand Prix - Houston. Twenty-five, count 'em, twenty-five Gro decks of varying types made the cut to Day 2, defining the environment. Of course the real irony is that Comer, their father, finished ninth at Vegas and tenth this weekend, just short of a chance at glory.

What follows is your average, workaday scientific breakdown of decktypes. Enjoy. 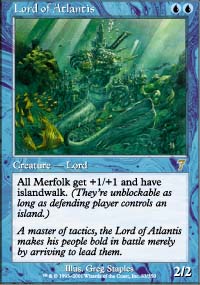 These are the 'Classic' Gro decks, together with other two-tone variations. Most widely represented is Bryan Hubble's Miracle-Folk deck, which seeks advantage in the mirror by running Lords of Atlantis, Manta Riders and Gaea's Skyfolk to ensure maximum Sigil of Sleep power.

The brainchild of Ben Rubin and Brian Kibler, this version adds white (and consequently more lands) to support Swords to Plowshares and Mystic Enforcer. The "Dragon" is an absolute beating.

Zvi's brainchild will not go away. Oaths give it a chance, but combo decks are notoriously bad against fish-type decks.

The Rock and His Millions - 4

Probably the second most played deck on Day 1, after Miracle-Gro, the champion deck from Vegas is still a popular choice. However, it seems out of place in this metagame. 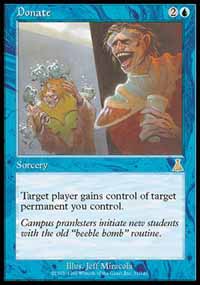 Another combo deck that is at the wrong tournament. It has the drawing power, but Daze is a wrecking ball.

Popular in the last-minute Trial, the winning deck from Grand Prix - Sendai dispatched Mike Long's Miracle-Gro handily. It's strange to see a control deck operate so well under Winter Orb.

Now rather Junk-like in its utility spells, these decks max out on Enforcer and Werebears.

Remember Sligh? The deck everyone thought was dead came back with a vengeance this weekend, tearing up Miracle-Gro decks and their limited creature base. If they do get to Threshold, Sligh is probably holding a critical mass of burn, and can outrace.

Eric Taylor's highly rogue combo deck is valued for its ability to kill in response to disruption. Without much countermagic, it needs a dedicated plan to beat Gro. 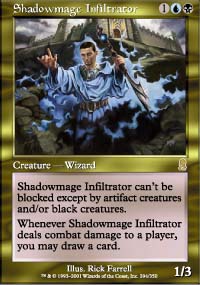 Both pure blue-black and blue-black-green control with Deeds. These decks combine point removal with card drawing and counters that rival those of Gro. It's sometimes tough for them to stop a fast draw, but anything short of that and they have plenty of game.

A little bit of everything. Wild Zombies. Walamies Control. Secret Force. Counter-Sliver. Three-Deuce. Even Dan Flood's innovative "Aggroath" that powers out Enforcers to swing. It goes to show that even in a dominated environment, there can be plenty of viable options.