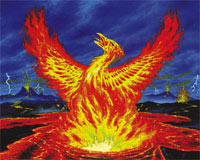 many years I considered Armao's Pizza on Euclid Avenue to be the best pie around. At that time I was a straight up extra-cheese and pepperoni guy, and Armao's was super-generous with the mozzarella. It was the finest. Then the store next door caught on fire and the entire building burned to the ground. I thought for sure Armao's would resurface, the Pizzeria of Bogardan. But it never did. I was really bummed out, because my favorite pie was no more. Other places just could not compete with the mounds of mozz that Papa Armao slung on his pies. It was a long time before this pizzaphile was willing to declare a new fave.

But it happened. Unbeknownst to me, I was secretly not a cheese man (pizza-ly speaking.) I was a pineapple man. “What? How can this be? Pineapple isn't even on the Official Registry of Toppings!” That's right. Somewhere down the road I had myself a slice of bacon, cinnamon and pineapple pizza (sometimes known as a Hawaiian pizza.) My Italian forefathers turned over in their graves. But there it is.

You see, I thought things could get no better. (And maybe they can't – if it's Armao-esque extra-cheesiness you seek.) But what I did not consider is that they can get different, and different is good – for many reasons. Since the world opened up to me on that one day when the tangy fruit mingled with the savory tomato sauce and crispy bacon, since that day I have been more open to trying all sorts of pizzas. My entire pizza scope was changed. 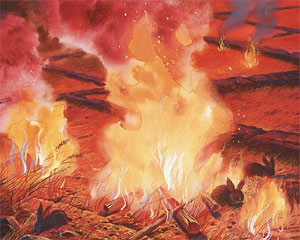 “What does any of this have to do with Magic?” Well, I could just claim that I am allowed to babble about “flavor” issues of any kind - but I won't. Instead I'll explain how I felt the same way about working on Magic art as I did when Armao's burned down. You see, Armao's just burned down again for the third time…just 2 cubicles over from me. I am talking about Magic's art director, Jeremy Cranford, leaving Wizards.

Jeremy leaving is, for me, the third burning of the pizza joint. I spent the last four years or so acquiring a taste for the Jeremy's sort of art direction. He was willing to take chances and let artists try some new things, but was also willing to call us out when we got too far off course or let our work slip a bit. This may not seem ideal when put in words, but for me it resulted in what I think is my best work. A hands-off art director will let me fiddle about in my own creative la-la land, but a director who gets down and dirty will help me improve my game. That was Cranford. And now that scene is but a smoking memory.

One thing you should all try to remember is that we are working one year ahead - so you will still be seeing Cranford's handiwork all the way through next year's Time Spiral block. I emphasize this because he's done some things that I think many of you will really like, some things that answer some longtime lamentations of magic art fandom.

If you were paying attention, you would have noticed that there was a second burning of Armao's as well. That fire took place when the previous art director, Dana Knutson, left the gig. I was really bummed out then too. Dana was the one who gave me my first Magic assignments, and his pizza will have a special place in my belly forever. When he left, I was not just saddened, but worried - worried that the next guy would come in and skimp on the cheese or try to get me to eat weird stuff on my pie…like fruit.

And he did. Jeremy was a completely different kind of art director. And, as I said before, different is good.

Part of the reason I wanted to write this article is to shine the proper light on Cranford's legacy. He has been the subject of unfounded and idiotic rumor and persecution. It seems like Jeremy is known more for the “bad” things he never did than the good ones he most definitely did do. Cranford did not fire all your favorite artists, nor did he throw darts at anyone's art. But he did hire a lot of the artists who have become your favorites:

That's a LOT of good stuff, by some of my new favorite artists. Hey, did I say that? New favorites, all courtesy of Mr. Cranford. (And that does not even count all the great artists who have burst onto the scene for Time Spiral block! I, for one will miss him.

And that brings me to the second reason for writing this article – Snozberry Pizza. What I learned from the pineapple and from Cranford is that, once again, different is good, and that change may take a while to settle in to, like a new pair of shoes or Standard in Spetember. But when we finally do settle in, change becomes the new norm and the unfamiliar becomes our new favorite – like Snozberry Pizza.

Thank you, Veruca, but we are the Magic makers, and we are the dreamers of the dream. And who shall it be, growing Snozberries out of his ear wax, now that Cranford is gone? It will be none other than our own resident wacko and artistic illuminatus, Jeremy Jarvis. I imagine he will take his own (seeking euphemism…) “unique” view of things and use it to take Magic art in a new direction. It's an exciting time, and I look forward to seeing what Jarvis's Snozberries end up tasting like on a big hot Magic pie.

Based on what Jarvis does in his own work, I would be willing to venture a guess that he'll encourage more symbolic, abstract, and “out there” visual concepts. I also know (since I sit just a shot's put away from the guy) that he is interested in trying to change the feel of instant and sorcery cards so that they are more easily discernable from creature cards. I am sure he's got some other tricks up his sleeve as well. Do not be surprised if, down the road, there is some shake-up in the Magic artist line-up. It's absolutely his right to use the folks whose work he likes and who work well with him, and to not use those who don't fit his vision of what Magic art should be. There's a new sheriff (or is it chef?) in town, and new guys like to shake things up.

Let's all tip our caps and give well-wishes to Cranford as he rides off into the sunset, and bid a warm welcome to Jarvis as he clanks in with spurs of Mithril!