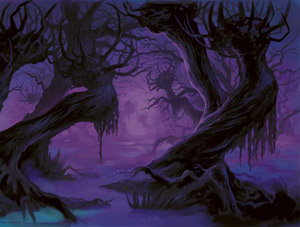 sisters cut off pieces of their feet to fit into the glass slipper, and get their eyes pecked out by birds at the heroine's wedding. The Little Mermaid's legs feel as though she were walking on knives with each step, and she turns into sea foam because she has no soul. In "The Robber Bridegroom," a young woman condemns her cannibalistic husband-to-be to death by showing her wedding party a severed finger from one of her fiancé's unfortunate victims. These were the kinds of stories once told to children all across Europe.

Fairytales weren't always the light, innocent fare we think of today. Once they were warnings to children to behave properly, or to observe cultural norms—and their tellers weren't afraid to use fear to get the point across. These were stories filled with horrible monsters, bloody death, and hideous fates, and these are the tales that contribute their atmosphere to Shadowmoor. This is the dark side of the fairy tale, the kind told by the appropriately named Brothers Grimm, filled with eyes glowing in the dark, slavering goblins, and night that never ends.

Shadowmoor was once the world of Lorwyn—in fact, in a sense, it still is. This is a version of the world just as real as the one you saw in Lorwyn block, but thanks to the Great Aurora, everything's changed. Where it was once constantly sunny, now it is always night, steeped in gloom and fog, with only cold moonlight to light the skies. Once-clear waters have turned brackish and chill. The howling wind creaks the brittle branches of rotting trees. Life, once abundant, either struggles to survive or is twisted into something vicious and cruel. This is not a world of despair, but of oppressive terror and constant death.

The major races of Lorwyn still exist (though be careful; the Shadowmoor block is NOT tribal or creature type-based!), as do most of the individuals you came to know, but most have also changed. Generally, they remember nothing of Lorwyn; to them, Shadowmoor is all there is, all that's ever been. Such a drastic change in the world is sure to cause just as drastic change in its inhabitants. Yet, as you're about to see, there's just enough commonality between Shadowmoor and its sunnier counterpart to make the differences all the more compelling. 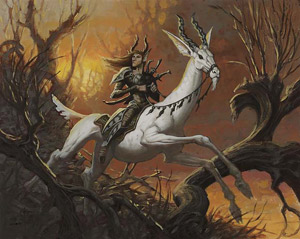 We'll start with the elves, for they are the closest thing to the "good guys" Shadowmoor has. Like the elves of Lorwyn, they are very concerned with beauty. But to Shadowmoor elves, beauty is more of a symbol or sign of life, abundance, and light—things that are woefully lacking in this dark plane. Constantly surrounded by darkness and ugliness, they have made it their mission to find and preserve whatever scraps of beauty this twisted world can muster. For more about elves (both flavor-wise and card-wise), check out Doug Beyer's article on Thursday! 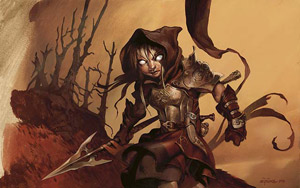 Where the Lorwyn kithkin were open, the Shadowmoor kithkin are closed. Their extreme paranoia drives everything they do. Thoughtweft still exists, though the constant sense of danger drives the kithkin into even higher tension. Their stories and lore still exist, though they are little more than fearful warnings about the dangers and evil lurking behind everything and everyone. Their towns, known as douns, are armed fortresses where they huddle in fear, striking out like cornered animals against anything that draws near. The saddest part is that most of the time, such fear is almost justified. But this paranoia also keeps the kithkin isolated and paralyzed, unable to do much but anticipate the next dark assault. 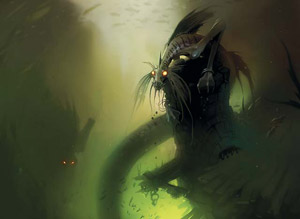 The merrow are no longer the intelligent, talkative keepers of the waterways they once were. In fact, Shadowmoor's lakes and rivers are in as bad a shape as the rest of the world. These merrow are generally brutish thugs who troll the waters in search of victims. Their selfishness and envy are such that they will steal anything other races value; only in theft do they show any of their Lorwyn guile and trickery. Merrow schools are more like criminal gangs, each defending their turf and loot with their various strengths. Some merrow still explore the Dark Meanders, which is an even darker, colder, more inhospitable place on Shadowmoor, holding darker, colder, more inhospitable secrets. 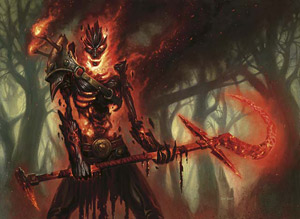 The cinders are the beings known as the flamekin on Lorwyn. As their new name implies, they no longer burn with the heat and intensity they once did. While some cinders can still manifest their rage in the form of flame, most have lost their constant fire, guttered out into skeletal, smoky remains. According to legend, their flames were taken long ago by a traitor known as the Extinguisher, and their bitterness has only grown with time. Now they want the entire world to suffer as much as they do, sowing chaos and destruction until nothing good remains. Even death may not stop their hatred. 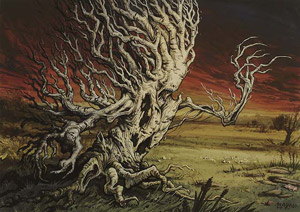 Like Shadowmoor's trees, its treefolk are leafless and twisted, often carrying a dreadful and painful infection known as the Canker. Trees are undeniably linked with life and abundance, things you will hardly ever find in this world. Therefore, the treefolk exist in a kind of bitter resentment, filled with self-loathing. They hate life, yet are still afraid to die. This attitude only makes the forests of Shadowmoor even more dangerous places to be. You'll still find some of the familiar treefolk types, like oaks and black poplars, but just as changed and corrupted as almost everything else in this world. 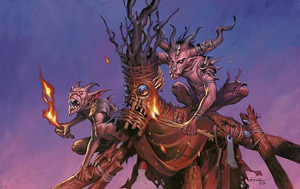 Boggarts in Shadowmoor are no more than mindless eating machines. No longer do they have the intelligence or desire to even create fanciful tales or enforce rules. They want to do only one thing: satiate their never-ending hunger. All their impulses and instincts drive them towards this unattainable goal. Anything from rocks to forests to living beings can be a boggart's dinner, easily ripped apart by their sharp teeth and mercilessly digested. Instead of warrens, loose gangs form nomadic feeding frenzies that lay waste to anything that's unfortunate enough to be in their way. Even then, it only takes a brief lean time for some boggarts to start eyeing fellow members with that hungry look. 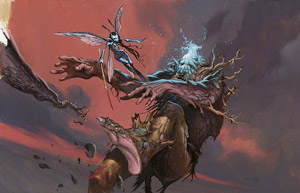 The faeries are whimsical, mischievous, vain, and seen as nuisances by most of the other Shadowmoor races. Their pranks are usually relatively harmless, but always annoying and embarrassing. Sound familiar? These are exactly the words I used to describe them in my Lorwyn article. In fact, the fae are the only race that have not changed at all in the shift between worlds, continuing to steal dreams and play pranks as always. Glen Elandra, the faerie homestead, is still the vibrant, lush place it was in Lorwyn, in extremely sharp contrast with the rest of the world. The faerie queen Oona is one of the few beings to remember Lorwyn and know the secrets of the Aurora, knowledge that she's used to her advantage. 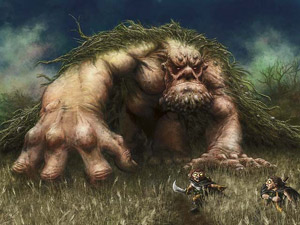 Though the giants aren't insane, it's undeniable that they've been driven a little off their heads by the way the world is. Their souls are beaten down by the constant dangers that come with being the biggest and strongest beings around. As such, they react in irrational and sometimes violent ways. Some seek to "fix" the world in ways that only bring more destruction and misery. Others enslave other races, hoping to build a better world just for themselves. Still others escape their troubles in long sleep, reveling in pleasant dreams. But those dreams always end, much to their despair. 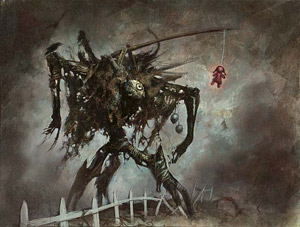 Finally, a few quick notes to round things out. Greater elementals still lurk Shadowmoor, though they too are generally corrupt, twisted into embodiments of fears and nightmares. Scarecrows are kithkin-made constructs brought magically to life. They have no real intelligence or place in the world, content to act in parodies of their builders' intent. But who knows what plans their dark king has in store?

Don't think this is all there is to the races of Shadowmoor. There are many other kinds of beasties lurking in the gloom, their existence only hinted at in flavor text, if at all. But it's not yet their time to step into the moonlight.

On to book matters. As Doug Beyer's already mentioned, the Shadowmoor set doesn't have its own novel; the traditional trilogy will conclude with the Eventide novel. Instead, the Shadowmoor book is an anthology of short stories about the plane and its inhabitants, stories that'll give you a wider view and fuller sense of what's going on and what's changed. While Cory Herndon's and Scott McGough's novella "Ode to Mistmeadow Jack" will continue some threads from the Lorwyn novels, the other stories may do nothing but explore some of the people and places that call Shadowmoor home. It's the perfect opportunity to absorb all that is Shadowmoor and get a good idea of what this world has to offer. It's been a while since Magic's last anthology, but Shadowmoor is definitely a world that benefits greatly from the multiple short story treatment. A must-have for storyline fans!

Now it's time for my preview card. Like much of Shadowmoor, it'll be at once familiar, yet totally new. While he'll have to wait a while to take center stage in the storyline, there's no reason why he can't see play in the meantime. 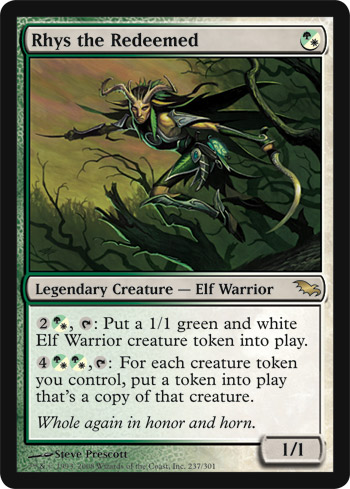 Of course, Rhys is only "redeemed" to those of us who know what he was like in Lorwyn; the Shadowmoor version of him has always been a highly respected warrior. Living in a benevolent and supportive society has allowed him to reach potential his "other" self would never have known. The first thing you'll notice are those mana symbols; check out Mark Rosewater's article for more on this. But there's a lot more to see here. Where Morningtide's Rhys the Exiled was an aggressive attacker that tended to kill fellow elves, the Shadowmoor Rhys takes a completely different tack. He prefers to play a supportive role, churning out elf token after elf token until the board is full to bursting. Only then does he do a Doubling Season, overwhelming your foe with an avalanche of tokens. Of course, the two Rhys-es work great together, but Rhys the Redeemed is especially nasty with cards that make larger tokens, such as Ajani Goldmane and Dragon Roost. Better start gathering those token insert cards; you're going to need all you can get!

As with Lorwyn, there's just too much interesting stuff going on to cover in just one article. Look out for a lot more in the weeks and months to come (including a somewhat unusual and interesting flavor-related project I contributed to that can be seen in Shadowmoor). But for now, have fun exploring all the many, many gloomy corners Shadowmoor has to offer. Until then, don't be afraid of the dark... Okay, actually, yes, be afraid...