lmost two years ago (boy, time flies when you're having fun), I answered this Ask Wizards question:

Believe it or not, some people thought I was serious. Others thought I was just a mean man who wanted to make 'Lancer' feel dumb. Really, I was just trying to be funny, and I was looking for an excuse to leak the name of the Grinning Demon card a month before its release. Because for me, bringing the Demon creature type back was a long-overdue sign that Magic was done soft-pedaling.

Before I get into the details of today's Demons, I want to say one thing about the Demons of the past. Even though Demons are back, you're still not going to see pentagrams or upside-down crosses in Magic. This is not because we're worried about offending someone or facing claims that the game is Satanic. It's because we're trying to create rich fantasy worlds, and references to real-world religions and belief systems disrupt those worlds. For many years now, we haven't allowed crosses or ankhs or pentacles or any other real-world letters, characters, or symbols on cards, for the same reasons (although, yes, one or two have slipped through over the years despite our best efforts). 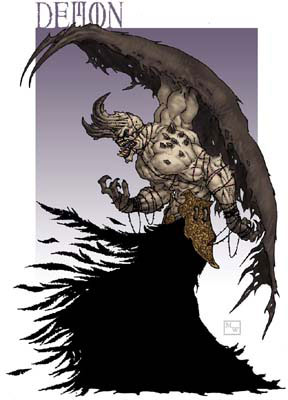 Back to our new-school Demons. I need to give credit where credit is due. The real force behind the return of Demons was Matthew Wilson and Tyler Bielman. Tyler was Magic creative director at the time, and Matt was Magic's lead concept illustrator. They spent over a year putting together a big, fat document full of good stuff for a secret project that, well, I'm still not allowed to tell you about.

When I took over as creative director for Tyler, I inherited this document. You can imagine my goobishness when I flipped through it and found this (right):

I immediately began looking for a way to put this concept on a card.

The text accompanying the concept illustration starts like this:

“Demons are physical manifestations of the evil parts of people's souls, given shape by an infusion of black mana when a greatly wicked human perishes.”

Matt worked with Tyler to ensure that the demon concept art reflected their love of suffering: the tattered, leathery wings; the head and arms wrapped in barbed wire; the train of crow's feathers; and of course, the giant, gnarly horns.

The result is black's biggest, baddest iconic creature. White has Angels, red has Dragons, and now, at last, black once again has Demons. Here's a short tour of the new-school Demons of Magic.

It didn't take me long to find a home for Matt and Tyler's demon concept. The card came in the form of a 6/6 black creature for

. (Incidentally, it has morph

as well.) Once the demon concept was in place, Magic art director Jeremy Cranford put the illustration into the capable hands of Mark Zug, who painted the Grinning Demon you know and love.

When the sketch for the illustration came in, I knew it would turn out strong. But I was nagged by the feeling that I had seen it before, some kind of demon déjà vu. It took me a couple of weeks to figure out what it reminded me of. Then it came to me: Sam & Max! Grinning Demon looked like the trigger-happy freelance police rabbit Max, from the old Sam & Max: Freelance Police comic by Steve Purcell (which spawned an old Lucasarts

Obscure references aside, though - in hindsight, I think I jumped the gun a little with Grinning Demon — I was so eager to bring Demons back to Magic that I acted too quickly. See, one of the cool things about the demon concept is that pair of giant, dark, leathery wings. You might have noticed that Grinning Demon doesn't have them, because it doesn't have flying. So our first new Demon ended up being an exception to the rule that Demons have flying. Oopsy. If I could turn back time, I think Grinning Demon might have been Grinning Something Else, and I would've saved the reintroduction of Demons for a card that does have flying, such as . . .

When it came time to create card concepts for the Legions set, there was no obvious place for our New School Demon #2. But then the development team changed a 6/6 creature for

. Here was my next demon. This time the art commission went to Thomas Baxa, who does very well with creepy things. And to make sure the illustration emphasized the cool wings of the demon concept, it read, “A demon in flight or with clearly visible wings.”

But you know what they say about the best of intentions. The sketch came back as a close-up profile of the demon's face, looking like he had just taken a big bite of barbed-wire pie. Very cool — cool enough, in fact, that no one noticed that you couldn't really tell from the illustration that this demon was a flying creature. At the last minute, we had Baxa emphasize the “wing muscles” on the demon's upper back to try to give a little subconscious indicator that something is back there.

A note about card naming: When it was time to give Grinning Demon a final name, we got some suggestions that were very evocative, such as “Soul of Suffering” and “Voice of the Shadows.” But I felt strongly that we needed to have the word “demon” not just in the creature type, but right there in the card name, for maximum impact. Likewise, when we named Havoc Demon, I lobbied to keep the word “demon” in the card's name. Rules are made to be broken, of course, and not every Demon's card name will be ______ Demon, but I think it's good to establish a naming pattern so that when you deviate from it, players notice.

When Magic art director Jeremy Cranford told me he had commissioned Brom to do the card illustrations that would grace the Mirrodin set's packaging, the two of us decided pretty much then and there that we would have him paint a Mirrodin angel and a Mirrodin demon. It just seemed to fit Brom's style like a glove.

Brom's demon looks the “power-hungriest” of the three to me. We were quite happy with the painting, which subtly incorporates the metallized anatomy unique to Mirrodin. Notice the gunmetal claws and the way the armor pieces have fused to the demon's abdominal muscles.

The Mirrodin design and development teams didn't firm up the card for Reiver Demon until later (and Platinum Angel's mechanic came much later). Sometimes Magic's creative elements can inspire great card design rather than vice versa.

In the illustration for Promise of Power and the token it generates, we see the Mephidross warlord Geth, before the necrogen has completely taken hold of him. You can see the metal patches beneath his graying skin, though, as well as the necrogen emanating from his eyes. Another few months and he'll be one of the mindless Nim. Kev Walker did a great job with the demon shadow; it's clear without drawing too much focus away from the power-mad Geth. 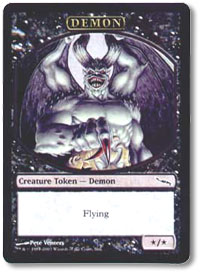 And who could ignore Pete Venters's “Uncle Sam” demon token (right)? This guy clearly steals the lunch money of all the other black creatures.

So I know a few of you are wondering. “What's gonna happen to the creature types I know and love in this crazy Japan-inspired setting we're headed into?” I can't say much, but I can say that everything in Kamigawa has some basis (albeit very loosely in some cases) in Japanese folklore and myth. And Japanese folklore and myth are lousy with demons (called oni in Japanese). If Demons did appear in Kamigawa, they might look something like this monstrosity, skillfully illustrated by Hideaki Takamura:

Now then, I have to get back to my “Triumphant Return of Unicorns” plan.