Several months ago, I talked about my Knight theme deck. The response was great and I knew I wanted this to be a recurring theme in Serious Fun. I also knew I wanted to go beyond what I normally do for a theme deck. While making a deck based completely around a creature type is a great way to make theme decks, I knew that I wanted to showcase some of the truly amazing theme decks out there that go beyond a Gatherer search for "Thallid" and rummaging through my cards to see if I have enough to make it work. And I already had the builder in mind.

To say that Judson Gruber, aka @GUDoug on Twitter, builds theme decks is a massive understatement. 1 He lives theme decks. Jud started as a Standard player in Lenexa, Kansas, playing FNM and other events at Win More Games. He started playing Commander when Morningtide was released, and, soon after, Commander was his exclusive format. In an effort to add to the fun, he challenged himself by trying to win with restrictive win conditions and decks that had to follow a theme. The themes and restrictions made Commander an even more interesting format for Jud, and the decks and restrictions became more and more involved. 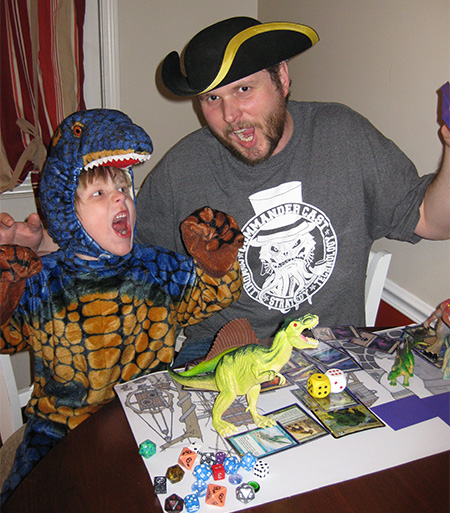 Jud has a plethora of theme decks, so I asked him to pick one. After going through the options, Jud chose his Dinosaur theme deck. Jud's four year old son, Griffin, is the inspiration for the theme, and an essential part of the deck. Griffin is obsessed with dinosaurs. Books and DVDs are all dinosaur-related. Dinosaur movies are the best! Not surprisingly, he showed an interest in cards such as Alpha Tyrranax, Leonin Skyhunter, and Spined Wurm. This interest in dinosaurs, and an article by Imshan Poolar where he tries to build a dinosaur deck to pique his daughter's interest in Magic were how things got started.

So how do you go about building a dinosaur-themed deck? Well you start just like you would any other Commander deck: pick your Commander. With a dinosaur deck, there really isn't much effort here: The Mimeoplasm has to be the choice. This was quickly confirmed as soon as Griffin saw the art. "Oh it's an Ankylosaurus with a T-Rex arm. Co-o-o-ol!" 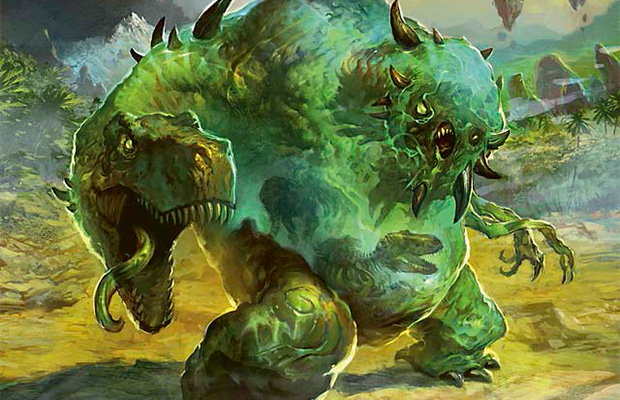 The Mimeoplasm | Art by Svetlin Velinov

The next step is where regular theme deck builders and Jud go their separate ways. Jud began going through each set and promo in the entirety of Magic. There is no shortcut database that shows you all dinosaurs in Magic art. If that is what you want, you have to find it yourself. To say that this is tedious and time-consuming is an understatement.

At some point, it became obvious that there needed to be some kind of criteria of what counted as a dinosaur. This is where Griffin came in. As the "World's Premiere Four-Year-Old Authority on What Is and Isn't a Dinosaur," Griffin became the criteria. If there was ever a doubt, it was left to Griffin. Ebon Dragon? Not a dinosaur, according to Griffin. No further discussion needed.

Weeks of this produced a card pool that was starting to show some form. Once it was finished, there were 500 cards to choose from. Jud quickly reduced that to 200 cards, just by eliminating the unplayable ones, then went through those remaining cards with Griffin a final time, just to be sure everything was a dinosaur. Jud searched for large images of each card's art using Wizards.com, DeviantArt, Facebook, artists' websites, and a variety of other places. After a few days, Griffin confirmed each card. As Jud told me:

Over the span of a few days, I managed to get most of my playables verified with a seal of approval. I even made sure to check, double check, and triple check some of the very questionable ones like the FNM Mulldrifter (it was a pterosaur, and a Quetzalcoatlus, specifically, if I remember correctly), Slipstream Serpent, Deathcoil Wurm, and Barkhide Mauler, which simply got, "Oh yeah that's a dinosaur" each and every time I asked, sometimes with a specific classification and sometimes not. 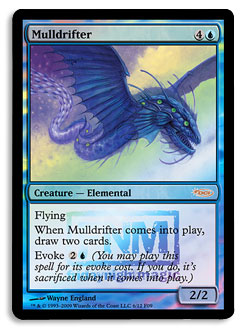 Jud brought it down to a decklist and the initial building was complete.

At least it would have been for me, but Jud likes to test things out before giving the seal of approval. He put the deck together on Magic Online and started to test it out. I asked him about the changes that were made to the deck. The morph theme, which is still strong, was cut down as the worse morphs (Slipstream Eel and Putrid Raptor) were eliminated. More card drawing was needed, so that was added in. Jud mentioned his desire for counterspells and penchant for removing them from his lists:

Unfortunately, the last few cards that I cut have been Echoing Truth, and then my three counterspell Dissipate (Innistrad art), Plasma Capture, and Soul Manipulation. At one point early on I was also running Countersquall (Duel Decks: Ajani vs. Nicol Bolas art). I really wish I would have kept Dissipate and Soul Manipulation, but maybe they will find a way back into the deck. I tend to cut counterspells frequently when I can't make a decision on what to remove for some reason.

And what were the last four cards added to the deck?

The last four cards I added, replacing the previously mentioned cut cards, where Big Game Hunter, Hidden Horror, Scourge of Skola Vale, and Hunter's Prowess. Hunter's Prowess was a bit iffy, but I figured I would ask Griffin what he thought. It had been months since had asked him anything about authenticating dinosaurs and I wanted to get an honest answer that wasn't guided and without asking if it was a dino. I found an isolated picture of the art and ask, "Hey Griffin, what's happening in this?" What followed was a long repetitive story of how that guy jumping and flying through the air was fighting a Dimetrodon. It passed the test.

After some further testing, Jud was happy and ready to bring the list to cardboard. At this point, he traded for the cards he needed and saw the deck become a physical reality. The final list? 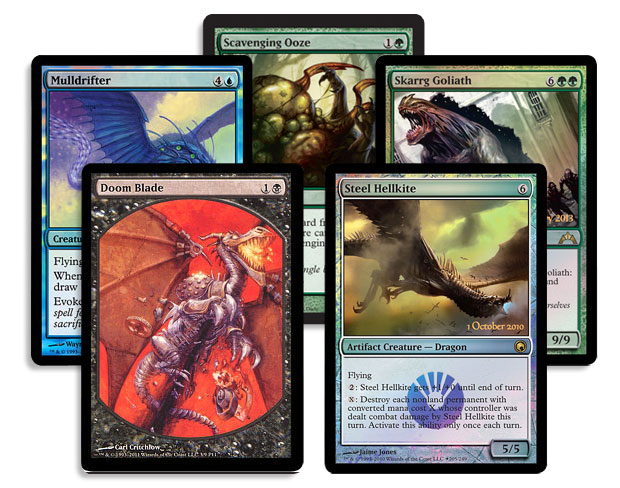 As far as playability, I'll leave it to the guy who has played the deck.

The deck is a lot of fun to play. While it is a slave to its theme, I feel like it has a pretty fresh take on what seems to be a fairly played-out strategy most The Mimeoplasm decks tend to take.... I think The Mimeoplasm has a boogeyman stigma to it and when you have seen one version it is fairly similar to every other version out there. First off, having the commander as The Mimeoplasm... means that you are not only playing your own deck but you also get to lean on your opponents' decks for help with creatures to copy. Also,The Mimeoplasm is built-in graveyard hate on problem creatures your opponents tend to abuse and recur.

That being said, the basic strategy of this deck is to play morphs. Some of them are good, some bad, some you never want to unmorph, and others are really useful. There are twelve morphs in the deck, meaning you have a lot of three-casting-cost 2/2 creatures you can put into play, attack with, let die, and then use to copy with The Mimeoplasm or as +1/+1 counter fodder. Having that many morphs keeps people guessing.... It is almost has "a game within a game," trickery type of feel to it. In addition to the morphs, there are: three cycling creatures that are easy to get into your graveyard; two cheap creatures that allow you to discard something early; four Specters (one of which is a morph as well) that can be used to get your opponents to discard something useful; as well as a Nephalia Drownyard and Mindcrank to hopefully mill creatures into someone's graveyard. There are also two sacrifice outlets that can be used in Scourge of Skola Vale and Grim Backwoods. Most of the creatures either are large vanilla 2 creatures that can be used as chump-blocking fodder when morphed or provide a body with evasion for The Mimeoplasm to copy to try and get Commander damage in with. There are lots of fliers, tramplers, and creatures like Rhox, Deathcoil Wurm, and Battering Wurm that can sneak around blocking...

That is the basic strategy. You have a lot of early plays that can chump and die or unmorph later as the game progresses, things that can cycle away at the beginning of the game, lots of spot removal for creatures and other permanents, and a good deal of card draw. The deck lacks a strong ramp plan, or any ramp plan at all, but since most of the time you are just paying three mana for your creatures it isn't really a problem. Seventh Edition Sky Diamond and Drake-Skull Cameo were the closest I came to finding anything ramp related. There is Nykthos, Shrine to Nyx, which is fairly useful, as the deck is heavy green, and Temple of the False God and Ancient Tomb for some additional acceleration. The only thing I think the deck is really lacking is a solid creature sweeper or two, as right now the deck is reliant on spot removal, Massacre Wurm, and Wash Out.

I recommend you try building a theme deck. Part of the fun is finding new cards in each set that fit your theme.

That is the fun thing about theme decks. There is always anticipation when new sets come out that Wizards will produce the exact card you are looking for to fit your deck with the right detail to allow you to play it.

P.S. My thanks to Jud for all his help. He's an amazing deck builder who was only too happy to share his build with me!

1: Jud also wrote a series titled Journey to Nowhere. You can find those articles at Commandercast.com. (return)

2: A "vanilla" creature is a creature that has no rules text in the text box. (return)