A trio of decks to beat the heat.

Depending on who you ask, we are now out of (or still in) the dog days of summer, at least in my hemisphere. These so-called "dog days" are characterized by stifling heat, stagnation, and just general unpleasantness, and got their name from Keanu Reeves's now-defunct pop-rock outfit, Dogstar, for reasons that even the mighty Wikipedia couldn't adequately explain. 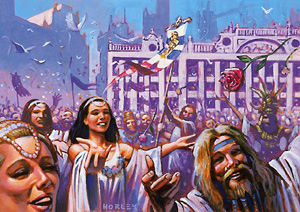 One source suggested that the dog days stretch from July 3rd to August 11th. This is nice for me, because I was born on the 12th and I would hate to think that my arrival on this planet coincided with the dullest time of year. Although I guess that would have made any behavioural issues I had seem like a breath of fresh air by comparison.

So I'm writing this on my birthday, because, well, I love you Johnnies so much and/or my deadline is tomorrow. I'm 28 now. This seems like a fine age to be, especially since I'm not the lead singer of a groundbreaking rock and roll band. I've been told that reaching this milestone has put me in some good company. For instance, Orson Welles, director of Citizen Kane, also had a birthday when he was 28.

In this week's column, I wanted to do something special because it's my birthday. Being 28, I decided to build 28 decks. That seemed like a lot of work for a single column, though, so I tapped into some of that wisdom that comes with age and decided that these 28 decks will trickle out over the next ten weeks. They might look like normal decks in normal columns, but they will actually be part of an intricate and overarching structure that I have spent the last few minutes carefully slapping together.

Up the Down Welling

Last Wednesday was your final opportunity to submit a deck for the Auction of the People Deckbuilding Challenge. My inbox was bursting at its digital seams with alphabet decks because several hundred of you had serious cases of Auction Fever. As soon as I have been successfully inoculated, I will be culling the weak and passing the semi-finalists on to the next stage.

Not everyone was caught up in the ABCs of deckbuilding, however. Reader Mark M. had his mind on other things, which was an excellent place to have it because I can use the material. You might remember Mark from one of my earlier columns which featured his then-pet combo, Student of Elements and Tibor and Lumia. Nowadays, Mark has a new pet combo. The first card is Tenth Edition's Upwelling, a sort of mana-bank which allows you to save your spare mana at an interest rate comparable to an actual bank. The second card is Braid of Fire. Not to be confused with Brayed of Fire (which involves fire-breathing donkeys), the Coldsnap enchantment acts more like a series of tiny classified ads in newspapers. You simply place them where they need to be and wait for the mana to start a-flowin'. I made 30,000 mana in my first week using Mark's combo. (NOTE: Exceptional performance. Actual results may vary.)

Putting these two cards together won't actually make you any mana, of course. What it will do is allow you to spend your Braid of Fire mana at a more convenient time than during your upkeep. As Mark says, "[The combo] would remove the greatest risk of using Braid of Fire, mana burn, and I've been wracking my brains on how to exploit it—at least, on how to stay alive long enough to exploit it! Any thoughts?"

Why, yes, I do have some thoughts. It's one of the privileges of being a sentient lifeform. While many of these thoughts are irrelevant as well as inappropriate for a family site, others are not. I will discuss these now. 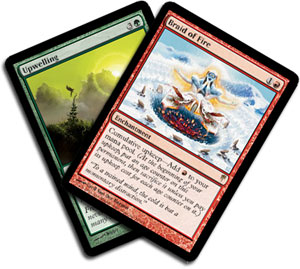 On their own, Upwelling and Braid of Fire are similarly risky, in that you might find yourself in a situation where you have a lot of mana and not much time to spend it. If your opponent offs your Upwelling or your hand is full of spells you can't play during your upkeep with your Braid mana, you will suffer third-degree mana burns. The most obvious solution to this problem is to use mana sinks. The ones I like most are lands: Dark Depths and the Time Spiral "charge" lands like Fungal Reaches. Each of the latter has an activated ability that allows you to pay

Another fine bunch of mana sinks are the firebreathers. Starting with the two-slot, you've got Aetherflame Wall (which is one polyp counter away from being strictly better than Tenth Edition's Wall of Fire), followed by Rakdos Pit Dragon, Furnace Whelp, Char-Rumbler, and Akroma, Angel of Fury. Torchling has a firebreathing-like ability and can absorb any amount of mana of any colour. Shivan Hellkite, Boldwyr Intimidator, Scourge of Kher Ridges, Pyrohemia, and Dragon Roost will also allow you spend your mana profitably once they make it to the board. Incinerate, Sulfurous Blast, and Kher Keep can also help alleviate your mana-burden in a pinch, while keeping you alive in the meantime.

Of course, a deck that pumps out so much red mana shouldn't be all about safety valves. A reckless red mage needs some, uh, danger valves as well. Besides the giant monsters I listed above, I thought I'd go with a set of Blazes. I would've used Demonfires, but I figured the deck had enough rares already.

Two columns ago, I arranged marriages for many Tenth Edition creatures. Unbeknownst to me, Puppeteer and Kamahl, Pit Fighter had eloped six years ago and didn't tell anybody, so I looked a bit foolish trying to wed them again. Everyone else still seems happy together, though.

After combing the Tenth Edition spoiler, I had enough Tenth-only creature combos that I could safely restrict myself further than necessary and only include those combos. However, I have since branched out and played matchmaker for a number of other magical animals, two of which I will discuss presently.

Everyone loves an 8/8 green creature with trample.

Am I right? At least, if the price is right? Eight mana is clearly too much, but what about two mana? That's the deal we can get for our Avatars of Might. The only problem is that in order to redeem your six-mana coupon, you have to find yourself way behind on the board, down by at least four creatures. Luckily, there are a couple quick and easy ways to accomplish this particular goal. The first is to pair Avatar of Might with its Prophecy partner in crime, Jolrael, Empress of Beasts. Since her majesty turns target player's lands into 3/3 creatures, you can animate your opponent's lands before playing one or more Avatars, depending. That's not the first pairing that came to mind, however. That honour goes to Avatar of Might and Hunted Troll. Hunted Phantasm will put you down by four creatures all by itself, but Hunted Troll is green and I didn't want to use blue as my secondary colour. For a number of reasons, I wanted to go black.

First of all, black gives me access to some other cards that leave your opponent with more creatures than you, most notably Sleeper Agent and Hunted Horror. More importantly, I wanted to use a pair of sorceries: Crime and Stronghold Discipline. The former gives you an out against all the tokens you are giving away, while at the same time threatening the one-sided Armageddon when you have an active Jolrael on the table. The latter, of course, punishes your opponent for having all the tokens you gave away, while at the same threatening the (almost) one-sided Acidic Soil when you have an active Jolrael.

The rest of the deck is made up of mana-acceleration and a bit of Dimir House Guard toolbox. You can transmute for Hunted Troll and Stronghold Discipline, as well as Icy Manipulator (handy for keeping down Sleeper Agent or centaur tokens), Damnation (handy for keeping down everything), Bloodbond March (fun with a graveyard full of Hunted Trolls and a Stronghold Discipline in hand), and Brooding Saurian. The lizard won't allow you to reclaim all those tokens you own (it specifies nontoken permanent), but will allow you to steal back your Sleeper Agents if you would rather have them on your side.

From Dusk 'til Spawn

Mike Flores will tell you that nobody blocks. This is obviously a slight exaggeration, and applicable to competitive Constructed formats above all. For our purposes, I'm going to amend that and say that nobody blocks Knight of Dusk. Why would you? Well, one reason you might do such a thing is because you were forced to by Knight of Dusk's fiancé, Balduvian Warlord. 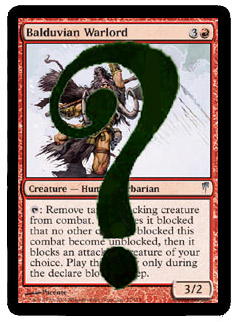 Now, I don't profess to know how Balduvian Warlord actually works. The FAQ for the poor, complicated bastard makes a Stephen King novel look like a James M. Cain. And it doesn't even include the regularly, occasionally, and rarely asked questions like "Can I use this as a beer coaster?" and "Where do you keep the aspirin?" All I know is that under certain circumstances you can use him to make someone block your lovely Knight of Dusk. Sure, it's a long way to go to kill a creature, but it's always more entertaining to jump through hoops. Just ask a circus performer.

While those two were off on their honeymoon, I gathered up a bunch of other creatures that aren't terribly fun for your opponent to block, creatures like War-Torch Goblin, Godo's Irregulars, Flowstone Salamander, and Pit Spawn. That covers the "damned if you do block" section. How will we damn them if they don't block? Ninjas, of course! Ninja-ing out a Throat Slitter after your opponent declines to block your Knight of Dusk seems like grade A comedy to me, and I've been certified.

I rounded out the deck with some Mogg War Marshals and Siege-Gang Commanders, because Balduvian Warlord isn't very exciting when you've only got one creature to attack with. The goblins are also good with ninjutsu, and Siege-Gang Commander combos with Flowstone Salamander in many of my favourite Magic limericks. Last of all, I added a Balduvian Rage, a spell whose origins date back to the time when Balduvian Warlord finally got a glimpse of his own rules text. Here's the deck:

As you can see, the deck has a minor goblin subtheme, a very minor salamander subtheme, and a practically nonexistent Sorrow's Path subtheme, which, I suppose, is as it should be.

Until next time, keep it real, dog.