dolmen is a construction of enormous stones, usually with two or more vertical stones supporting another, horizontal stone, like a table.

Dolmens can be found all over the plane of Lorwyn; they are a favorite architectural technique of giants and other creatures. Check out the art of Ancient Amphitheater and Lairwatch Giant, as well as Dolmen Gate.

Giants also construct "dolmens" from fallen trees. Note the art of Axegrinder Giant—the front door of his lair has three trees in the same pattern as a dolmen.

Dolmens can also be found on Earth! The Lorwyn setting was inspired by the myths and folklore of the British Isles, and some of the world's best-known dolmens are in Ireland. The word "dolmen" comes from a Breton phrase meaning "stone table," but variants on the dolmen stone tomb construction can be found all over the world. 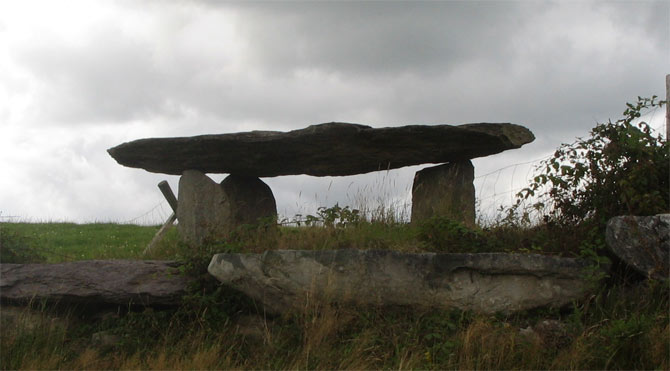 Check out Wikipedia for more information on dolmens.