ruidism is the recognition of life's proper place in the grand scheme of our world, and the identification of mana as the fundament on which all existence rests.

The druid is not a scholar, nor a healer, nor a judge, but all three, and more than them combined. The druid is the bridge between the mind and the natural world, one so committed to the fertile earth underfoot that she devotes her existence to understanding its mysteries. The druid enriches the minds of others with nature's teachings, and enriches nature with the learned care and attentiveness of her students.

Enough sermonizing—to the matter at hand. It is with a grave heart that I have summoned you all today. The green glades of Lorwyn are shadowed by a grim, unnatural cloud, one that burns with cinders of rage and ignorance. Fellow elves, I beseech you to look upon our other brethren with respect and camaraderie. Honored treefolk, I ask that you share your deep-ringed wisdom with us so that we may share in victory against this threat. And our friends the changelings, may your childish imitation today become true unity with our cause.

The flamekin Vessifrus and his army march on Gilt-Leaf. Yes—quiet, please. Quiet, I beg you!

Vessifrus is a firebrand in both senses of the word, a leader whose charisma leads his misguided minions to murderous arson. He sees himself as a revolutionary, an agent of change, but in truth all he will bring about is destruction. 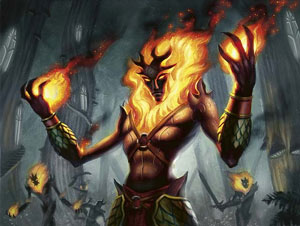 The huntmasters and packmasters, on cervinback and attended by packs of trained wolves, have already ridden forth to meet them, but I fear they shall fail. The hour has come when elfkind—and truly, all brethren of the woodlands—face the shocking fate of possible extinction. This is why we must all set aside our differences and come together, not as different peoples, but as druids.

I told you I feared the hunters' failure. I have seen their strategy fail before, when the flamekin's ancient relatives, the greater elementals, struck in anger over three decades ago. The elvish hunters will merely push on the front lines of Vessifrus's forces, perhaps thin the ranks of the grunts, but will ultimately fall. Why? Because the forest has no defense against elemental fire, and it is the forest from which we all derive our greatest strength.

That is why we must be the forest's shield—and its supreme weapon. Not since the time of the giant Tyranda Trunkbraider has there been such a need for druids to rise up for the cause of war. And not since the time of the treefolk Old Thrashbark, long before her, has any druid unleashed the spell I propose to wreak upon the forces of Vessifrus this day.

For today we will sever this act of violence at its root. Vessifrus's armies are fueled not only by imprudent fury, but also by a torrent of mana that gushes forth from the mountains surrounding the Gilt-Leaf Wood. Vessifrus's mana bonds with those lands are our true enemy—without them, we would but face the impotent tantrums of children.

Join me, brethren. Let us join hands, and chant the words that have not been heard in this glade for a hundred years. Let our voices become as one with the songs of nature, and ring out through the Wood and into the crags and peaks that fuel our enemies. Let our arms form a circle to welcome those ancient, sun-touched mountains to join our cause in the name of harmony. Let the spirit of Lorwyn be as one, unmarred by fire and unsundered by war.

–From the battle-speech of Traweg, archdruid of the Gilt-Leaf Wood

on the creative team like to ground Magic's brand of fantasy in roots of real-world folklore. This gives it a familiar texture, makes it feel well-worn, detailed and true, and lets us play with tradition in ways that show off Magic's deepest values. We don't always stick precisely to the source material—in fact, Magic's points of departure from folklore are usually intentional. The differences help make a particular monster or folk legend belong to Magic. The Druid creature type is no exception. Today, on this side of the column, we'll take a brief look at the history of druids, and Magic's use of the druid as a subtype and a creature role. Check out the other half of the column for a look at druidism from another perspective—that of a dweller of Lorwyn.

Druids were members of a highly trained intellectual class of the Celtic cultures of ancient Britain and Ireland. They had complex roles, serving as priests, scholars, teachers, ambassadors, and leaders of public rituals. The Celts, predating Christianity, were polytheistic, amassing a pantheon of dozens of gods and hundreds of minor deities. Druids venerated nature, not drawing a strong distinction between philosophy, science, religion, and direct experience of the natural world.

In modern English, the words "true" and "tree" differ only by a letter, which is a clue to an etymological history that can be traced back to those ancient Celtic druids. In old Celtic, the word derwos, meaning "true," was very similar to the root dru, meaning "tree," and in old English, treow was the word used for both concepts. The old Irish form of these words was drui, from which we get our word "druid" (as well as "dryad"). (Source: etymonline.com) Druids didn't see a distinction between nature and truth—and to this day, their name means both.

Although druids have been in Magic since the beginning, the modern application of the Druid type was only invented a few years ago. There were Druids on the type line as far back as Antiquities' Citanul Druid and Legends' Ichneumon Druid, and druids in card names right from the get-go, with Alpha's Ley Druid (who was creature type Cleric for a long, long time). The word "druid" was used to mean, roughly, "nature priest," and was overwhelmingly green-aligned. Druid-themed cards didn't have specific mechanical meaning; they did a number of things "green does," with possibly a slight "protector of the forest" flavor. Citanul Druid hates on artifacts; Ichneumon Druid hates on the caster of the second instant cast each turn (wow, how could blue survive back then with hosers like that?!). Elder Druid taps permanents, which we would probably see as a white or blue thing these days.

Tempest's Fugitive Druid has an Aura-related mechanic. Druids to this day have a slight association with enchantments, especially since the enchantresses, Verduran Enchantress and Yavimaya Enchantress (and now Mesa Enchantress) got the creature type Druid.

But the most important forerunners to modern-day Druids are those that have mana and land-manipulation mechanics. Thelonite Druid and Quirion Druid animate forests and Llanowar Druid untaps them. Avenging Druid searches out more and more lands. And of course, Ley Druid untaps your Maze of Ith I mean, your wholesome Forests to get ever-increasing supplies of good, green mana.

The most important evolution in the Druid class type took place in Ninth Edition, when the modern philosophy of the application of the type was codified. Eighth Edition had a preview of this philosophy, but just didn't have enough creatures of the right characteristics to demonstrate the rule. It was Ninth, specifically with the reintroduction to the core set of Llanowar Elves (who had just enjoyed a brief but well-deserved vacation during Eighth), that officially gave the venerable Elves the Druid type and provided the quintessential example of what it means to be a Druid.

The Druid class these days is mechanically about mana and land-manipulation. Civic Wayfinder, Seedguide Ash, and Treefolk Harbinger fetch lands. Leaf Gilder and Boreal Druid tap for mana, and Quirion Sentinel generates mana as it comes into play. Elvish Branchbender and Kamahl, Fist of Krosa animate lands to fight for you.

Druids had never had their own "Druids matter" card before, no +1/+1 Druid lord or Druid-token-generating enchantment. But now they have one, a guy who makes Druids matter, big time. If you open this guy at the Prerelease I guarantee you'll look around for the word "Druid" on the type lines of your other cards (and be sure to check for changelings, as well).

Building Around the Archdruid

The Morningtide set focuses mostly on five classes: Warrior, Soldier, Wizard, Shaman, and Rogue. But Gilt-Leaf Archdruid is one of the exceptions, a "lord" for the slightly weirder Druid tribe. It's not just a Wirewood Savage for all your Druid spells. Thanks to the changelings and a smattering of other, mostly green Druid allies, you can now do Armageddon one better—in fact, two better. Instead of just destroying all lands in play, and instead of just destroying your opponent's lands, you can (yoink) gain control of all of your opponent's lands. The deck is begging to be built already...

Remember that if you have enough untapped Druids, you can activate Gilt-Leaf Archdruid the turn it comes into play. Its land-stealing ability doesn't have the tap symbol in it—you're free to turn all your Druids sideways immediately, including the Archdruid himself. It works just like the cards from the Onslaught cycle such as Voice of the Woods or Skirk Fire Marshal. 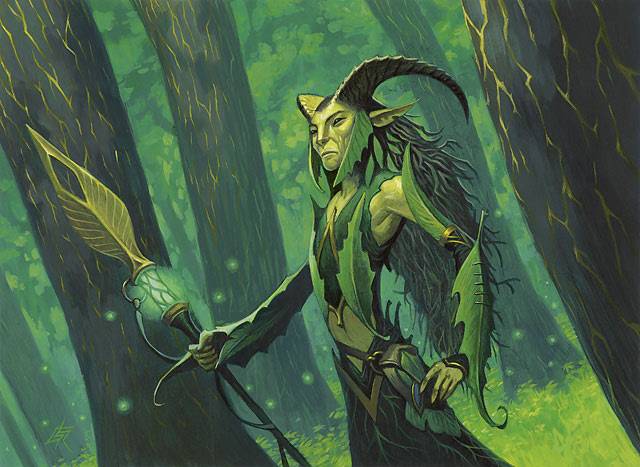 I hope you enjoy this opportunity to tap into a little-used creature type, and to welcome the Druid type to its new "lord-supported" status. Druids, as the people who stand at the junction between nature and truth, can finally take the land under their rightful command.