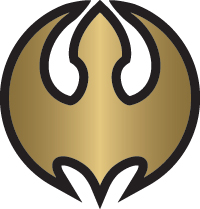 The greatest knights have gathered together to once and for all end the reign of terror that has plagued their lands for centuries. Holy paladins, noble cavaliers, and swift skyhunters all answer the call to hunt dragons to the death and restore order to the realm.

For dragonkind, the answer is simple—incinerate the invaders! Enraged goblin minions pour from the mountain crags to repel the intruders, but that’s only to give the majestic hellkites time to take to the skies and unleash a firestorm that no knight could hope to survive.