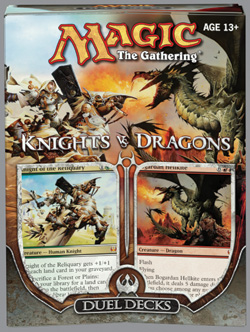 What Knights lack in size (at least, relative to dragons), they make up for in efficiency and teamwork. With a coordinated effort and a sound battle plan, your band of skilled swordsmen will slay the Dragons!

This deck is about strength in numbers, so get those Knights onto the battlefield. Several of your best creatures cost two white mana to cast, so having two white mana on turn two or three is very important. Even though it might feel like a waste, don't hesitate to play Sejiri Steppe as your first land if it means you'll be able to cast one of your best creatures, such as Silver Knight or Knight of Meadowgrain, on turn two.

Don't underestimate how useful your lands can be. Selesnya Sanctuary has a drawback that forces you to return a land you control when it enters the battlefield. If you return Sejiri Steppe to your hand for a second use, you can turn this "drawback" into an advantage. Furthermore, because Selesnya Sanctuary gives you access to the same mana but with fewer lands, it helps you set up Knight of the White Orchid's Plains-fetching ability and makes Edge of Autumn an active card later into the game.

Knight of the Reliquary is the perfect synthesis of brain and brawn, able to go toe-to-claw with the fiercest dragons while at the same time possessing an arsenal of trickery. An early Grasslands means it'll hit the battlefield as a 3/3, and it can only get bigger from there! Its ability to turn Forests and Plains into other lands means you can summon an ally to the battlefield in Treetop Village, give a creature protection from red with Sejiri Steppe, or simply accelerate your mana by trading a just-tapped Forest or Plains for an untapped one!

Your removal is limited so use it carefully. You have many more creatures than your opponent and they are generally better in combat, so frequent attacks to bloody the battlefield will allow you to conserve your few removal spells. With the initiative and a handful of powerful tricks, you'll put even opposing Dragons on the defensive—although Shivan Hellkite and Kilnmouth Dragon should still be destroyed or exiled as soon as possible!

Who says Knights have to fight with swords? Certainly not these Knights, whose weapon of choice is the awesome Loxodon Warhammer. Combining a significant power increase with trample and lifelink, the Warhammer turns even the most youthful Knight into a Dragon-clobbering powerhouse! Creatures with first strike are virtually unbeatable in combat when wielding the Warhammer and the life you'll gain makes it difficult for even 5/5 Dragons to keep pace in the damage race!

What Dragons lack in speed, they make up for in overwhelming force and destruction. Your opponent will be the aggressor early on, but if you can keep things close in the war of attrition, the plucky Knights will be reduced to ash.

Priority one is staying alive. Early defense like Cinder Wall, Mudbutton Torchrunner, and Fire-Belly Changeling are critical to your survival, absorbing damage meant for you and hopefully taking down some early Knights. Dragon's Claw can provide a significant life boost, especially if cast on turn two.

Your most powerful spells cost five mana or more, and several others scale in power with the number of Mountains you control. Take advantage of Armillary Sphere and the basic landcycling ability of Fiery Fall when you can. Seething Song and Skirk Prospector, with its ability to turn Goblins into red mana, can provide short-term solutions to your mana needs and are worth saving for emergency bailouts, like a kicked Breath of Darigaaz or an early Cone of Flame.

Although an opposing Silver Knight may seem like an unstoppable threat against your deck, you do have a few ways to defeat it. Henge Guardian, being colorless, can keep it in check while you ignite the skies above. Colorlessness is also a feature of your best weapon against troublesome Knight—Ghostfire. And don't be hesitant to borrow a Knight of your own to battle with via Temporary Insanity.

Finally, there are the Dragons themselves, both the best creatures and most effective removal in your deck! It is usually better to incinerate creatures when Voracious Dragon or Bogardan Hellkite enter the battlefield. Left unchecked for a few turns, each of your larger Dragons can easily burn its way to victory.