is a day I veer wildly away from the usual focus of this column (that's “Magic Online” for those of you still waking up) and preview an Unhinged card. Some of you, I know, are already hitting the “Discuss” button below so that you can respond with outrage. “How dare Wizards force JMS to do an Unhinged preview! It's a snub in the face of Magic Online players everywhere! Unhinged will never come to MTGO, so why torture us? Down with the oppressive marketing dictators! YEEEAAAARRRRGGGGGHHHHH!”

See, the thing is, every weekly columnist is doing an Unhinged preview either last week or this week. For most of us, this means we're going off-topic (for example, does Mike Flores think Richard Garfield, Ph.D. is going to be making a splash on the tournament scene?). Let's all embrace the spirit of Unhinged and have some fun.

Besides, I think this card is really cool:

Welcome back, Shahrazad! I started playing Magic after Arabian Nights, so I have never experienced the subgame-goodness of Shahrazad. For those who have, this card should bring a smile to your face.

Before I dive into the wacky details behind Enter the Dungeon, let me say a few more words about Magic Online. First off, this is a great card to demonstrate why Unhinged doesn't make sense for online play (Ass Whuppin' ain't a bad example either). Physical activities like hunkering beneath one's table are the sort of things reserved for face-to-face play.

That said, I think it's fun to imagine what Enter the Dungeon might look like if Alan Comer or Rachel Reynolds programmed it. Wouldn't it be spiffy if, after Enter the Dungeon resolved, the screen shrunk, all backgrounds were replaced by a dungeon motif, and Avatars appeared darkened with flashlights beneath their chins? Or maybe in the Casual Constructed room, the Avatars would crouch beneath their tables when playing an Enter the Dungeon subgame? Or maybe a cool, Frankensteinian theme song could play when starting a subgame, culminating in maniacal Vincent Price laughter?

Here are the two entries from the Unhinged FAQ regarding Enter the Dungeon:

Q: Do Double cards and Time Machine apply to the next subgame?
A: Yes, subgames do count as games for the purposes of "the next game played" cards.

Q: What happens if we're in the middle of a subgame and someone plays an Enter the Dungeon?
A: Start the new subgame under another table.

It may also be worth taking a peek into Magic's Comprehensive Rulebook to understand the particularities of subgames. I think we can all agree that 506.1 is, shall we say, challenged by Unhinged.

506.3. To start the subgame, each player removes his or her library from the game face down. It becomes that player's deck in the subgame. Abilities that trigger on cards being removed from the main game face down will trigger.

506.3a A player's deck in the subgame may have less than the minimum number of cards. If a player's deck contains less than seven cards, the player will lose the game as soon as it starts, even if he or she mulligans. (See rule 420, "State-Based Effects.")

506.4. The subgame proceeds like a normal game. Randomly determine which player goes first.

506.7. If another subgame is created during a subgame, there can be multiple subgames and main games. Each main game has one subgame, and each subgame has one main game. In this case, some games will be considered both a main game and a subgame at the same time.

I think we can all agree that the most fun way to build a deck around Enter the Dungeon is to induce the most subgames humanly possible thereby creating the most complex, bizarre single Magic game in history. Mark Gottlieb, unsurprisingly, already did this with a focus on Shahrazad. The sort of tricks he invoked--Mirari, Spellweaver Helix, Fork, Panoptic Mirror, Burning Wish--these are all worthy ways of making your opponent concede due to insanity. In fact, you can recreate Mark's deck with some tweaks to give yourself eight subgame-creators, and thus twice the opportunity to get your subgame groove on.

It's fun and nostalgic to think of Enter the Dungeon as a Shahrazad reprint, but to me the fun is looking at what's unique about Enter the Dungeon. In my mind, there are three key difference you want to play up in a Dungeon deck:

If you lose a Shahrazad subgame, you lose half your life. That means it's dangerous to lose. If you lose an Enter the Dungeon subgame, there aren't a lot of consequences. The winner, meanwhile, gets any two cards from her deck. This puts the emphasis on winning the subgame more than losing it. It also means that after you win your first subgame you're almost guaranteed another one since you can tutor for another copy of Enter the Dungeon. Some good two-card packets that come immediately to mind are:

Of course, I guess you could make a deck whose object was to actually lose each subgame, thus slowly shrinking your opponent's available deck for future subgames (note rule 506.3a). Combine Enter the Dungeon with Traumatize, for example, and some potentially funny things can happen. Since the prize for winning a subgame is any two cards from your library, though, I just don't see how you can hope to stay alive to make a strategy like this work. I think focusing on winning the subgames, thus plopping another Enter the Dungeon into your hand, is the correct way to go.

3) You're playing under a table.

I'm not sure what to say about this one except that you have a decided advantage if you're short and/or petite. Choose to play at a tiny table and you can laugh your, dare I say, ass off playing Unhinged against that big, basketball-toting brother of yours. Also, I think the strategy here is to scout out the table ahead of time and make sure you're playing on the side with less gum stuck to its underside. As an added bonus, you're almost immune to other players' Ass-Whuppin's when playing a subgame.

After all of that, let's throw an Online Extended decklist at ya, pretending for a moment that Unhinged actually did make it into online play:

Honestly, cards like Enter the Dungeon make me want to attend the Unhinged Release event on November 20th. I'm not the only one, either. After hearing about Unhinged and having me show her some of the preview cards, my wife mentioned that she's actually considering attending. I mean, really: Who doesn't want to jump under the table for a Dungeon grudge game? Just don't forget the Vincent Price laughter whenever Enter the Dungeon resolves.

The Champion of Kamigawa 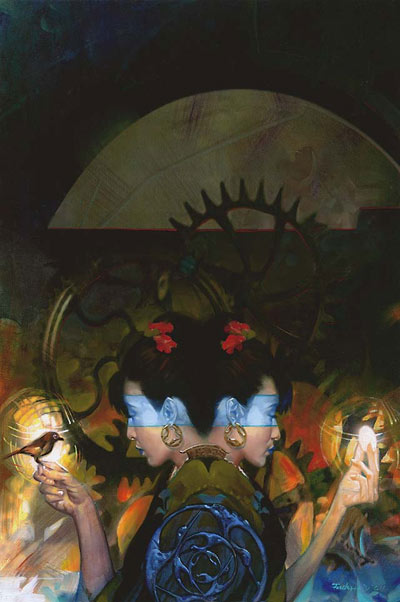 As I mentioned during Top 10 Week, November 6th brought the invitation-only Champions of Kamigawa Championship. All 266 people who played in the final earned their invitation via an impressive finish during the Release Events, and they competed for a ton of prizes. After nine rounds of Sealed Deck, these folks emerged as the best of the best:

Congrats go to VaiN, aka Mats Neumann from Sweden, who not only won a small mountain of Champions booster packs, but also took home the framed original art for Time Stop! I had a chance to catch up with him after the tournament, and he was gracious enough to give me this summary of the experience.

“I opened a really strong sealed deck with one big bomb, Kokusho the Evening Star. I was also lucky to have other strong cards in black such as Hidden Laughter, Devouring Greed, Thief of Hope, Rend Spirit and Pull Under. I paired my black with green (Kodama's Reach, Time of Need, Kami of the Hunt, Burr Grafter, Moss Kami, 2x green Zubera, Venerable Kumo), and added a red splash for Glacial Ray, Hanabi Blast and Kami of Fire's Roar.

“The Top 8 draft started at about 3:40am. I ended up with 11 spirits (Horobi, Death's Wail, Kabuto Moth, Thief of Hope), 4 Samurai (Nagao, 2x Cursed Ronin, Nezumi Ronin) and Nezumi Shortfang as creatures, and Befoul, Devouring Greed, Distress, Blessed Breath and 2x Indomitable Will as my tricks. Since I felt I had a really strong deck, I chose to run 18 land to minimize any risk of manascrew.

“Once the games started I was granted very good draws during the whole top 8, not losing a single game. It all ended about 6:40am, Sunday morning.
Afterwards I celebrated with some chocolate out of the minibar, and then went with my friends back to the GP-site to play in a Team Limited tournament... but that's another story!”

VaiN, my friend, you are one dedicated Magic player. Nicely done and congrats!

Now that Champions of Kamigawa has arrived in Magic Online, it's time to revive my “Preconstructing Constructed” experiment. A natural response might be, “You're what!?” If the background I give today isn't enough for you, either check out the Star City Games website archives or do an Internet search on “Blog Elemental” and you're sure to find it.

The idea is this: A lot of new players approach deckbuilding with a new set by buying Preconstructed decks and slowly evolving them into more focused decks. Aaron talked about this phenomenon recently (incidentally, he also referenced my initial Blog Elemental experiment in the article). I want to recreate this experience by taking a Champions of Kamigawa precon, play iting, and slowly changing it into something that's fun to play in the Casual room of Magic Online. Each week, in addition to my other topics, expect me to explore card interactions, games, and tweaks to the deck. By January (or sooner, if you're getting bored), I'll consider my deck finished.

Below are the guidelines I'll be using during this experiment. If for some reason you see me needlessly violating one or more of these guidelines, feel free to challenge me on the Message Boards.

There are two questions I'm going to ask you to make for me today. First, you need to decide which precon I evolve. If you aren't familiar with them, the decklists can be found at the bottom of the Champions of Kamigawa product page.

Second, you need to decide what format I'm designing my deck for (note, I'm only picking formats I think would be fun with this experiment):

No matter which deck and format you choose, I guarantee it will be a fun ride. As you know, I tend to focus on the weirder card interactions, so whatever happens will surely deserve the “Casual” moniker.

May your table be free of gum,