Since the very first moment I picked up the game, way back in that last millennium, it has been a part of my life. It may even be a longer relationship than that. During the summer of 1994, when a handful of gamers prowled the streets of Manhattan looking for even one crummy booster of the new game, I found myself drawn to the game even as I was being shaken by an anguished stranger desperate to find packs. There was an almost audible click in my mind as I realized this game was something special.

As I was being accosted that summer afternoon, I could barely imagine that Unlimited edition would ever be released to assuage the ravenous appetites of these early adopters. I could never envision the unexpected turn my professional life would take, much less that more than a decade later, I would be writing a feature article announcing the second class of the Magic: The Gathering Pro Tour Hall of Fame.

I was lucky enough to be involved in the Hall of Fame process last year from a fairly early stage of its development. We had no idea how it would be received but we all knew that we wanted the Hall of Fame to embody our love of the game. It was a big, scary affair to put on. I knew that when I finished introducing Jon Finkel at the induction ceremony for the inaugural class of the Hall of Fame, everyone had created something special. 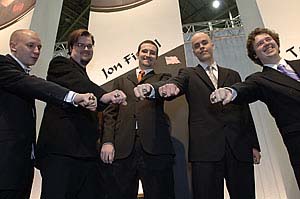 Which five players will join the Class of 2005 in the Pro Tour Hall of Fame?DCI Program Manager Scott Larabee was one of the first people to talk to me about the existence of the Hall of Fame. He has been at the center of not only replicating the success of the inaugural class but building upon that success to make this year's process even smoother than last year – no small task considering how well things turned out for year one.

“I guess it was a 12- or 18-month process from the point where we decided to have a Hall of Fame,” recalled Larabee. “Working on the rules and criteria, figuring out how the first year's voting was going to work, and then actually having the ceremony at Worlds. It was far better than all of us expected. You start out with something like that and you have no idea what it is going to be at the end."

“The Hall of Fame exceeded last year’s expectations, quite frankly," he said. "We didn’t know if the players themselves would take this seriously or say, 'oh, right…a Hall of Fame for Magic’.

"I remember a brief encounter with a player who is eligible in the year two class at a trade show. I asked him, ‘What do you think about the Hall of Fame? Do you think its worthwhile?’ He thought about for half a second and said, 'It’s all we talk about.' I decided right there and then that all the hard work was worth it."

After those first few moments in Yokohama after the induction ceremony, it was pretty clear the Hall would catch on.

“As soon as it was over, everyone who was involved thought, 'Man that really worked well,' " Larabee said. “It was great to be involved in the process and see it pulled off so well – AND to have it be so exciting and talked about. There are Pros who have set this as their career goal now.

“Our biggest fear was that we would do something like this and people would treat it like a joke. I don't think anyone has done that. Everybody has taken it seriously. The players care about it, the judges care about it, the people on the committee care about it. They want to make sure that when they vote they are happy with their vote.”

Personally, as I watched five of the game's greatest players put their rings on display for the throng of photographers crowding against the stage, I heard that same click from that distant summer afternoon.

And then it was back to work for next year.

The biggest change from Year One to Year Two is in how the Hall of Fame class will be announced. Last year's two-stage reveal of the Selection Committee vote and the Players vote was a little anti-climactic when the final member of the Hall was announced, compared to the tremendous heat surrounding the initial four inductees as chosen by the Selection Committee.

“Going into Year Two, we made some changes to the voting process,” Larabee explained. “We think there were some flaws last time so we have come up with some changes. We hope that this will improve the voting process. Everyone is excited again. I had people emailing me wanting to know when their ballots would be arriving. The people out there are really interested in being part of this process.”

In case you had forgotten, the selection criteria given to voters is simple:

So without further ado, here are the candidates for enshrinement in the Magic: The Gathering Pro Tour Hall of Fame Class of 2006:

Ballots will be mailed out August 1, with the five-member class announced Sept. 8. The five will be flown to the 2006 World Championships in Paris for the induction ceremony, and will be able to put that immediate Pro Players Club level 3 membership to use by playing in the event.

Under the new system the Players Committee will have a much greater impact on the make-up of the Hall of Fame class and the entire class will be announced at the same time.

Instead of going by straight vote tallies, this year's Hall of Fame class will be determined by a percentage of votes received and the ballots from the two committees will be weighted: 66.7% Selection Committee, 33.3% Players Committee. Here is an example of how the math would work out:

“The main reason we changed it is that last year the player’s vote felt very ‘oh by the way’," said Randy Buehler. "There was this big flurry of activity and excitement and four guys got voted in. Then a month later Olle Råde got voted in and it felt like that wasn’t as much fun. At the same time it was nice to be able to give the players more of a vote. Instead of having 100 percent control over one spot they now have 33 percent control over all five of them. It felt nice to include the players who have clearly embraced the hall and seem very invested in having it be the ultimate goal for a Magic player.”

The totals will be tabulated based on percentages of ballots returned, not total members on each committee.

“We think this is fair,” explained Scott. “It will work out better. Everything will be announced at once and we won't have one vote influencing the other.”

The Selection Committee includes 83 people chosen from various aspects of the game which include DCI officials, tournament officials, key Wizards of the Coast personnel, founders of the game, Hall of Fame members, commentators, and other observers. The Players Committee is made up of every player with at least 100 Pro Points.

"What I really like about it is that we have set it up that it is a process without biasing who goes into the Hall of Fame," Galvin said. "I like that there is this great deal of fan ownership and player ownership of defining what the Hall of Fame means. We did a good job of setting up a system that lays out how this thing is going to grow. We tilled the field but we didn’t manage the crop. I really like seeing how it is developing.”

The Players Committee includes Pro Point totals through the weekend of July 23-24 (Grand Prix-Malmo and St. Louis). If a Selection Committee member also has 100 or more Pro Points and would be eligible to be on the Players Committee, his vote will only be counted in the Selection Committee (that is, he won't get the equivalent of 100 percent of a vote). If you have 100 or more Pro Points, make sure your contact info is updated by going to the DCI main page.

While the Players Committee will continue to grow as more players cross the 100-point threshold, the Selection Committee is always subject to change. There are 22 new members on this year's committee while seven members from last year will not be voting this year. The departures are largely from personnel within Wizards either shifting jobs or leaving the company. The additions to the committee include the five members of the inaugural Hall of Fame class.

“Being back on the Pro Tour, however briefly, was really, really fun," said first-class inductee Alan Comer. "My wife got to come to see me inducted and playing on the Pro Tour was a blast. While it was fun to play, it does not compare to the feeling of actually being voted in.”

The juiciest part of having a second Hall of Fame class is the debate over who belongs there. In addition to the players who did not make it in from the Year One class there are 47 members eligible for induction this season and it is entirely likely that more than one member of this year's class could be getting in on their second year of eligibility. As the Hall of Fame moves forward beyond that initial class, there is the additional honor of being voted in as a first-ballot Hall of Famer.

“It is really tough,” said Scott when discussing this year's ballot with his Selection Committee hat on. “Last year I remember looking at the second year and thinking that it would be easy. But now that it is here? It is not easy.”