wife is a high school English teacher and still she often hits me with quizzical looks when I bust out Magic words in everyday conversation. I am not talking about jargon like "mana base" or "'tings" or "graveyard recursion." What I am talking about are regular ol' words whose meanings come straight from the dictionary. As it turns out, Magic provides quite a hefty boost to the 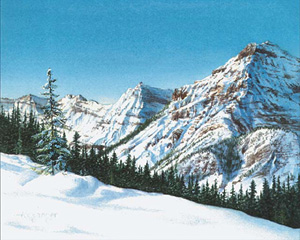 vocabulary. I've been assimilating words from Magic since the old days, words like seraph, sextant, taiga, zephyr, reparations, legerdemain, ornithopter, harmattan, harbinger, and a whole bunch of other cool words. I am sure a lot of you are muttering to yourselves, "What a dope, everybody knows those words." First of all, everybody does not know them, and secondly, you probably do because of Magic. I'd be willing to bet that a random sampling of Magic players would do better on the vocab section of the SAT than a random sampling of non-players. Because of the nature of the game, and the fact that cards need to keep plumbing the depths of language for new ways to describe guys who tap stuff and spells that do damage, we are all exposed to massive amounts of quality words. Since I started working intimately with Magic names and flavor text, the vocabu-lanche has been plowing me over even more.

Not only do we see big-ticket Scrabble words, we also see words that, as a whole, have little meaning outside the hallowed halls of Magic, but that expose us to word parts and word roots that can lead us to a greater real-world vocabulary. "Necromancer" might be a word that we all have come to recognize as a black-aligned wizard, but the word roots are even more potent. When you take the pieces apart, you get "necro," (from the Latin root for death) and "mancer" (from the Latin root mantia, which means divination.) You're then prepared to immediately enjoy Necropotence, Consult the Necrosages, Necrogen Spellbomb, Keldon Necropolis, Necroplasm, as well as Prodigal Pyromancer, Auramancer, Lavamancer's Skill, Ovinomancer, and countless others.

Part of appreciating Magic's word parade is being able to tell the cubic zircons from the diamonds. To make things tougher for you, Magic sprinkles 100% made-up words in with the real words you've never heard before. These words are not going to help you on standardized tests, but I am mentioning them here because they relate to a fun little exercise we do here at Taste the Magic called Okra, Twinkie, Tofu. What better way to celebrate words than a fat helping of Time Spiral Block vegetables, snack cakes, and processed vegetable products? Venerable Vorthoses are probably familiar with O.T.T., but I'll kick out a refresher for those of you who have not experienced it before.

Magic cards are loaded up with words you just don't encounter much when you're not slinging spells. Okra, Twinkie, Tofu will give you quick blurbs on the following sorts of Magic words:

Okra! A real word, friends. A whelk is a large spiral-shelled marine snail. It's also a pimple, but we did not take that into consideration when naming the "mana drainer."

From one blue rare to another, but this one's all additives and preservatives—not a real morsel in it. It does have a recognizable word root, though not one you'll find in even the thickest of etymological tomes. It's the root "Ixid-," from Ixidor, Reality Sculptor.

This word is made of real ingredients, but in a combination that is our own. The roots "sangro" and "phage" mean "blood" and "eater." It makes sense, because this zombie only eats folks whose blood is still pumpin'.

The living is all it eats.

Basal is a real word for fundamental, something that forms a basis. Originally I had thought it was a Tofu word, derived from "basalt" (a black volcanic rock.) But no, these are not just black creatures, they are simple, basic creatures at the bottom of their evolutionary chains!

Mmmmm....taste the completely man-made white fluff filling. Interestingly, there is an outdoorsman's clothing company in Seattle called "Kavu." This has very little to do with subterranean creatures awakened to defend Dominaria, but the whole Seattle thing seems like more than coincidence. Still, I say it's a Twinkie.

Combine word roots "Calci-" (calcium, calcium salt) and "derm" (skin) and you get something with really hard, really dry skin. Is this why it's untargetable—its skin is too hard to penetrate? Or is it that having dry skin makes it irritable and unwilling to allow intimacy?

Annelids are animals of the phylum annelida, worms and other segmented creatures.

It sounds wet and creepy...but tastes like a Twinkie.

This processed word comes from "penta-" (five) and "-arch" (chief, ruler). Its roots can be seen in pentogram, pentad, hierarch, and monarch—all quality words also used on Magic cards.

An ophidian is a member of the suborder ophidian—a biology goob's word for a snake.

Completely made-up word for a place where shapeshifters seem to abound like nightstalkers in Shimia (also a Twinkie.)

"Chrono" (time) + "zoa" (animal/organism) = a magical creature made up of and/or thriving on time itself. You can find "chrono" on a zillion cards in Time Spiral block alone.

Pulmonic means "like or relating to a lung. You have a better chance of encountering this word on an SAT than you do in seeing it on another Magic card. I don't think the game has any more room for creatures that are like a lung.

It's a made-up word for a jungle on Dominaria. Made-up or not, I am glad it exists, because it's a real hoot to say. "Mwonvuli!"

Gnarr on planet Earth is a verb that means, to snarl. In Magic, it's a word for an ungulate woodland beast that snarls. (I threw in ungulate just for added wordly fun—it's an animal with hooves.)

This is one of the words that rolls off Magic's tongue like it's no big thing, but that is rarely used in everyday life. Yes, there's a car called a Scion, but who would guess from the refrigerator with wheels that "scion" means descendant, or heir? Based on the vehicle, you'd think it meant "completely devoid of aerodynamics."

It's a made-up word for a jungle on Dominaria. Made-up or not, I am glad it exists, because it's a real hoot to say. "Mwonvuli!" There, I said it twice.

Completely made-up word that sounds like an insectoid thing, but is really just part of the anagram gag: Guided Strike =

It's doubtful, but not impossible, that we'll see another kusite anytime soon.

This is a quality word that I do not want to miscommunicate. Here's what the dictionary says:
A partial shadow, as in an eclipse, between regions of complete shadow and complete illumination.
An area in which something exists to a lesser or uncertain degree.
I think the penumbra creatures in Magic use a bit of both definitions. On one hand, they're spooky shadowy creatures, while, on the other, they exist to a lesser degree—as token versions of themselves.

It isn't in dictionaries, it doesn't mean anything, it just sounds big.

Not to be confused with "thornwield," "thornweald" does not mean "one who uses thorns as a weapon." In the case of the Archer, Thornweald is not a description of the archer, but of the place from which he hails. The Thornweald, which comes from the words thorn (pokey thing) and weald (woodlands) is a dangerous forest of deadly creatures and cunning survivalists. You can also see weald on the card Highland Weald from Coldsnap.

Sophic might sound like a race or society to which this centaur belongs, but it's actually just a dandy adjective that we have (surprisingly) never used before. It means "wise; teaching wisdom."

Not really a word, just a name that sounds really bad-ass. I like that it sounds really close to Terex, the maker of the biggest truck in the world (the tires are 11 feet in diameter and weigh 8,800 pounds each!)

The word "nihil" (nothingness) is worked into the name of this creature of shadowy blackness. It's also the key to understanding the meaning of Annihilate, Decree of Annihilation, and Nihilistic Glee.

It's also important to help you understand exactly how much more Okra, Twinkie, Tofu I can stand to consume right now.