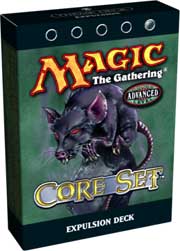 he "Expulsion" deck is all about making your opponent discard cards. Your plan is to use your discard spells and abilities to cripple your opponents-they can't play what they can't hold on to!

Early in the game, play any spells you draw that make your opponent discard cards. You want to get all those cards out of your opponent's hand before he or she gets a chance to play them. Keep the pressure on, and eventually your opponent will have access to only one the card each turn.

Ravenous Rats are good for a quick start. After they finish their job of chewing away an opponent's card, send them over to gnaw on your opponent. If he or she manages to play creature threats, feel free to throw the Rats in front of enemy attackers to stall out your opponent's plans.

When you play Coercion, you get to look at your opponent's hand. Try to memorize what's there so you'll be prepared to react to incoming spells. Then take a close look at the cards and choose the one you're least able to deal with.

While you're at it, why not add injury to the insult? Megrim deals 2 damage to a player whenever he or she discards a card from his or her hand. Combine a Megrim or two with Abyssal Specter, a creature that forces a discard when it hits your opponent, and the damage adds up quickly.

Be careful not to have so much fun making your opponent discard that you forget about threats already in play. Deathgazer, Dark Banishing, and Sever Soul should take care of any pesky creatures that try to get in your way.

Try using the fearsome Severed Legion (which can be blocked only by black and artifact creatures) to creep through your opponent's defenses. Add Larceny to the mix, and your nearly unblockable creature causes more discarding when it hits your opponent. If you have Larceny and Abyssal Specter on the table, your opponent has to discard two cards every time the Specter strikes! 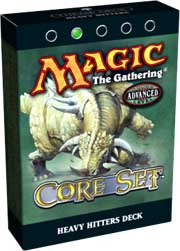 f the "Heavy Hitters" deck feels a little bulky when you pick it up, it's because the creatures inside it are really, really big. After all, what could be more fun than smacking your opponent around with humongous monsters?

The first thing you need to do when playing "Heavy Hitters" is to build up your mana base. With help from cards like Elvish Pioneer, Fyndhorn Elder, Wood Elves, and Rampant Growth, you'll have access to more mana than most players would know what to do with. Luckily for you, "Heavy Hitters" gives you plenty of things to play using all that mana. Big, nasty things.

Two cards in "Heavy Hitters" are kind of tricky to use. Lure is a creature enchantment that forces all your opponent's creatures to block the creature that's enchanted with Lure (if they can). Wait until you have several creatures in play, and then play Lure on the smallest one. Your opponent won't be able to stop your bigger creatures from charging right through.

Giant Growth is an instant that gives one of your creatures +3/+3. You usually don't want to use this card just to get in a little extra damage unless you can win by doing so. Wait until one of your creatures would be destroyed, then play Giant Growth on that creature so it gets an extra boost. Your opponent's creature will probably end up in the graveyard instead of yours!

The key to winning with "Heavy Hitters" is to keep the big creatures coming. Your opponents will be so busy trying to deal with your monsters that they won't be able to attack you. 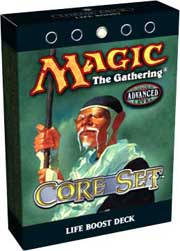 he "Life Boost" deck lets you build your own army of Soldiers, with Angels to lead them. To win with this deck, play your small creatures as quickly as you can to deal some early damage. If your opponent manages to hold off your attackers, build a strong defense. Then you can start cautiously attacking again to get in those final points of damage.

Half your creatures cost only one or two mana to play, so you can get them on the table quickly. Attack with swarms of your small creatures if you can get some damage through, even if that means you lose a creature. If your casualties become too great, hold off until you have enough mana to play your bigger creatures, such as Angel of Mercy. You can also make all your little creatures bigger with the enchantment Glorious Anthem. Giving your entire army +1/+1 makes it a force to be reckoned with.

It's okay if you take some damage early on. The deck has many cards that raise your life total, including creatures that give you life when they come into play. But try not to use the Healing Salve just to gain life unless you're about to lose. You can put it to better use saving one of your creatures that would otherwise take lethal damage.

Gaining life is great, but don't let up on the attack. If you don't deal damage to your opponent, the highest life total in the world won't matter. Use your flying creatures to soar above your opponent's forces. Also, Seasoned Marshal is a great leader for your ground troops. When it attacks, you can tap your opponent's biggest defender to help your army punch through.

What else can you do about your opponent's creatures? Crossbow Infantry can take care of the smaller ones. Keep one Crossbow Infantry untapped and your opponent won't want to attack or block with small creatures. You can use Chastise, Pacifism, or Spirit Link to protect yourself from huge creatures. Remember that if you play Spirit Link on an opponent's creature, you gain life every time it deals damage! 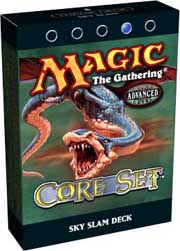 he "Sky Slam" deck lets you take control of the game with tricky blue spells, and then your big flying creatures will really deliver a beating. You won't always attack much in the beginning of the game, but by the end, you'll be on top of the world. Blue magic is all about control. Unsummon slows your opponent down by bouncing a creature back to his or her hand. Besides preventing the creature from damaging you, this also makes your opponent waste time paying for the creature again!

Mana Leak and Remove Soul can stop your opponent's plans outright. Use Mana Leak when your opponent can't pay the extra mana. Don't waste Remove Soul on a tiny creature-you can be sure your opponent will try to drop a bigger threat soon enough. If a big enemy creature does manage to hit the table, you can lock it down withDehydration.

Your creatures can also help you set the pace. Horned Turtle blocks your opponent's ground creatures while your deck gets going. Sage Owl lets you set up what you'll draw for the next four turns. Spiketail Hatchling can make your opponent wait an extra turn to safely play that big spell. Meanwhile, Thieving Magpie and Aven Fisher keep you a few cards ahead of the competition.

Once you get enough lands in play, you can drop your big threats and your big defenders. Urza's Armor helps keep hordes of little creatures at bay while Air Elemental rules the skies. With no way to block all your creatures, your opponent will soon be defeated by the air assault. 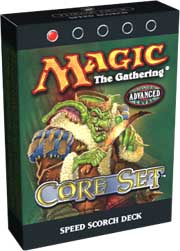 he "Speed Scorch" deck is chock-full of everyone's favorite little red creatures. All but one of the deck's creatures are Goblins, and the last creature is the Goblin King! Your mission is clear: overrun your opponent with Goblins. While your opponent tries to fend off your horde, you can use your instants and sorceries to blow things up.

During your first few turns, slap down Goblins as fast as you can and attack. You can play every creature in your deck with just three lands in play. Surprise your opponent with Raging Goblin and Goblin Chariot. Because they have haste, you'll be able to attack with them right away.

Want to make your Goblins truly love you? Play Goblin King to give all your Goblins +1/+1. (The Goblin King is a Lord, not a Goblin, so it doesn't get the bonus.) Don't attack with Goblin King unless your opponent has no blockers-you don't want your pumped-up Goblins to suddenly get smaller.

"Speed Scorch" has some spells that help you get your Goblins through your opponent's defenses. "Burn" spells, like Shock and Lightning Blast, deal damage directly to a creature or player. Hold on to them until your opponent plays a creature that could block, then use one to burn that potential blocker away.

Need an extra dose of damage to take out your opponent's creatures? Don't be afraid to stuff your Goblins into the Fodder Cannon. One of your measly little Goblins for one of your opponent's big monsters? That's a good trade.

If you've done enough attacking with your Goblins, you may be able to finish off your opponent with one or more of your burn spells. But before you start targeting your opponent with your fiery spells, make sure you can finish the job. Don't waste your direct damage on an opponent who could win with creatures first!

The most important thing to remember when playing the "Speed Scorch" deck is this: don't hold back! If you hesitate, other decks gain the advantage. Go all out, and you'll win.