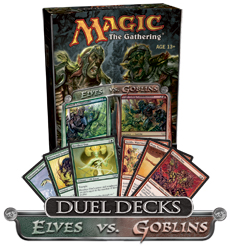 oblins are impulsive, reckless, and have no long-term plans. Elves, on the other hand, are cool-headed, wise, and resourceful. Play smart, and you’ll win.

Your first order of business is simple: Survive the assault! The Goblins will blitz you with a combination of fast attackers and quick damage-dealing spells, hoping to end the game as soon as goblinly possible. Just hang on. Lead with your less important Elves and let them absorb the burn spells. Then play the Elves that will swing the game around. Don’t be afraid to block and trade creatures in combat. Use your Giant Growths to keep your Elves alive. Weather the assault and the Goblins will run out of steam.

Once the attack stops, you start taking over the game. Draw extra cards with Harmonize and Slate of Ancestry. If you can clog up the ground with creatures, Timberwatch Elf makes it impossible for the Goblins to attack and Wellwisher sends your life total out of reach. At this point, only the Goblins that can repeatedly deal damage, such as Siege-Gang Commander and Tar Pitcher, are truly dangerous to you, so save your Moonglove Extracts for them. As soon as Voice of the Woods starts churning out 7/7 Elementals or Ambush Commander transforms your Forests into an army of woody Elves, it’ll all be over but the crying—and a crying Goblin is an embarrassing sight indeed.

lves are stodgy, timid, and always looking toward the future. Goblins, on the other hand, are fierce, fearless, and live for the moment. Play passionately, and you’ll win.

You’re faster than the Elves, so the plan is simple: Attack! If the Elves manage to amass an army, they’ll be very difficult to fight through—so don’t let that happen. Keep constant pressure on the Elves, force them into bad blocks, and use your damage-dealing spells and abilities to pick off key players like Timberwatch Elf. If they never get a chance to breathe, they’ll never stabilize the battlefield. You’ll roll over them like a ball of burning mud rolling down a greased-up hill.

What if your attack stalls? Not to worry. You have a backup plan: Fire! If your initial onslaught weakened your opponent enough, change tactics. Instead of using cards like Siege-Gang Commander and Tarfire to deal damage to your opponent’s Elves, use them to deal damage to your opponent. Emberwilde Augur and Flamewave Invoker help fan the flames, and Skirk Fire Marshal caps it all off with a whopping 10 damage to everyone and everything (except itself)! Make sure to keep any Wellwishers off the battlefield and have fun burning your opponent to a crisp. After all, nothing smells more delicious than a big ol’ pile of barbecued Elf.